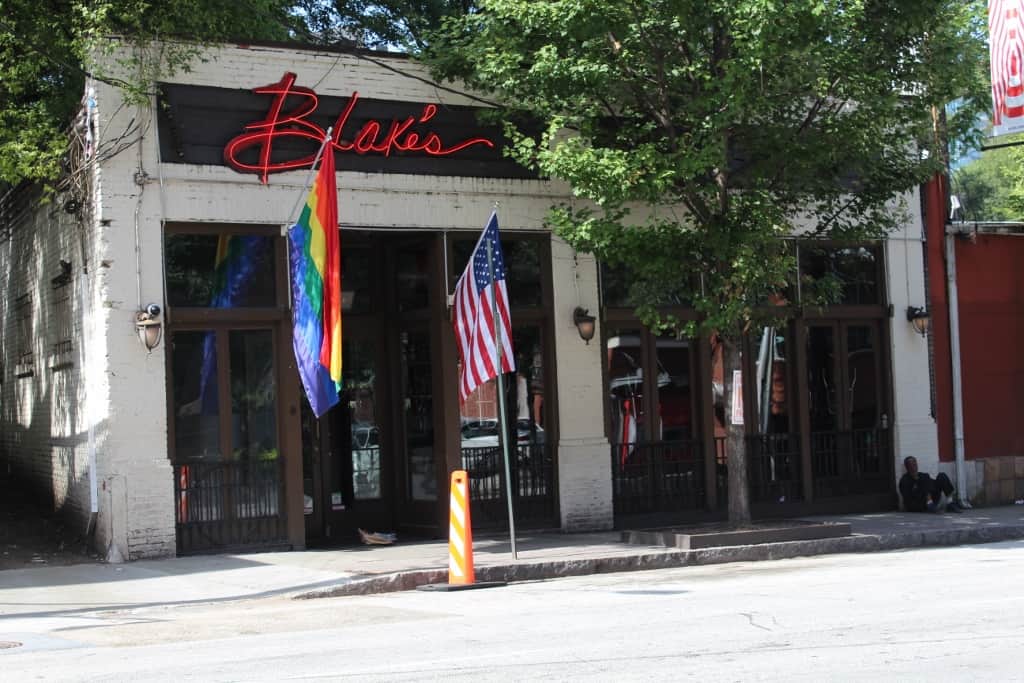 The dress code sign was taken down as of Friday morning. (Photo by Patrick Saunders)

UPDATE: Blake’s on the Park has responded to the dress code sign controversy, see bottom of article.

Two weeks ago, people of all colors in the LGBT community came together at the intersection of 10th Street and Piedmont Avenue to celebrate a major civil rights accomplishment. Now an incident at that same intersection is raising concerns over racial attitudes within the community.

Popular Atlanta gay bar Blake’s on the Park is taking heavy criticism for a sign displaying a new dress code, which includes restrictions like “No hoodies,” “No sagging pants,” “No bandanas/dew rags” and “No oversized chains or medallions.”

The final line of the sign says, “We reserve the right to refuse service to anyone.”

“To me I took it as ‘We prefer blacks not to be here’ without saying ‘No blacks,’” says Gee Session-Smalls, who was at the bar Thursday evening and posted a picture of the sign to social media, leading to a flood of comments and critiques. “Even though many of us do not dress like that, I still take offense to it because I know you’re trying to eliminate a group of people.”

Session-Smalls, co-founder of The Gentlemen’s Foundation, says he asked the doorman how long the dress code had been in place, and he answered, “As of 30 minutes ago.” The sign was posted at both the front and back entrances.

The sign was no longer there as of Friday morning but it is unclear if it is only posted during working hours. No one answered the door at either entrance, a Blake’s employee who answered the phone would not comment on the matter and Blake’s management did not return calls or text messages.

Holiday Simmons, the the director of community education and advocacy for LGBT legal group Lambda Legal, says, “Certainly some of these are based on racial stereotypes and that’s highly problematic. We believe in intersectional work and LGBT equality is nothing without racial justice. We are a diverse community of people of color, people with disabilities, all kinds of folks and Blake’s in particular is sort of a meeting place for so many people during Pride season and throughout the summer, so we don’t know if they are intending this or not but it’s certainly suggestive in ways that are problematic.”

For Session-Smalls, the sign isn’t an anomaly but a trend.

“I think that in Atlanta, especially amongst the black community, there is an overall feeling that we aren’t really welcomed in a lot of the gay bars and establishments,” Session-Smalls says. “Blake’s being one of them, but we don’t have many choices of where to go.”

UPDATE 2:01 p.m.: Blake’s on the Park posted the following response on Facebook. The message reads in full:

In an effort to improve the safety of our customers at Blake’s on the Park, the management team met to discuss measures that might be taken to curb the presence of unidentifiable individuals within the establishment. The primary concern was the wearing by some of hoodies and dark glasses so as to make oneself unidentifiable. When we have had to review videotape for security reasons, the perpetrators have consistently been wearing such attire. Our customers must feel safe and the banning of hoodies and dark glasses, especially at night, will be enforced.

The recent posting of a laundry list of banned dress was not developed by management of Blake’s. The dress code is a standard code adopted by many local clubs and bars. Our intention was to post an edited list to address our specific needs, but the code was prematurely posted in error prior to the appropriate edits having been made.

We apologize to anyone who was offended by the error. We welcome ALL at Blake’s, and we will continue to make efforts to ensure the safety of ALL our customers.