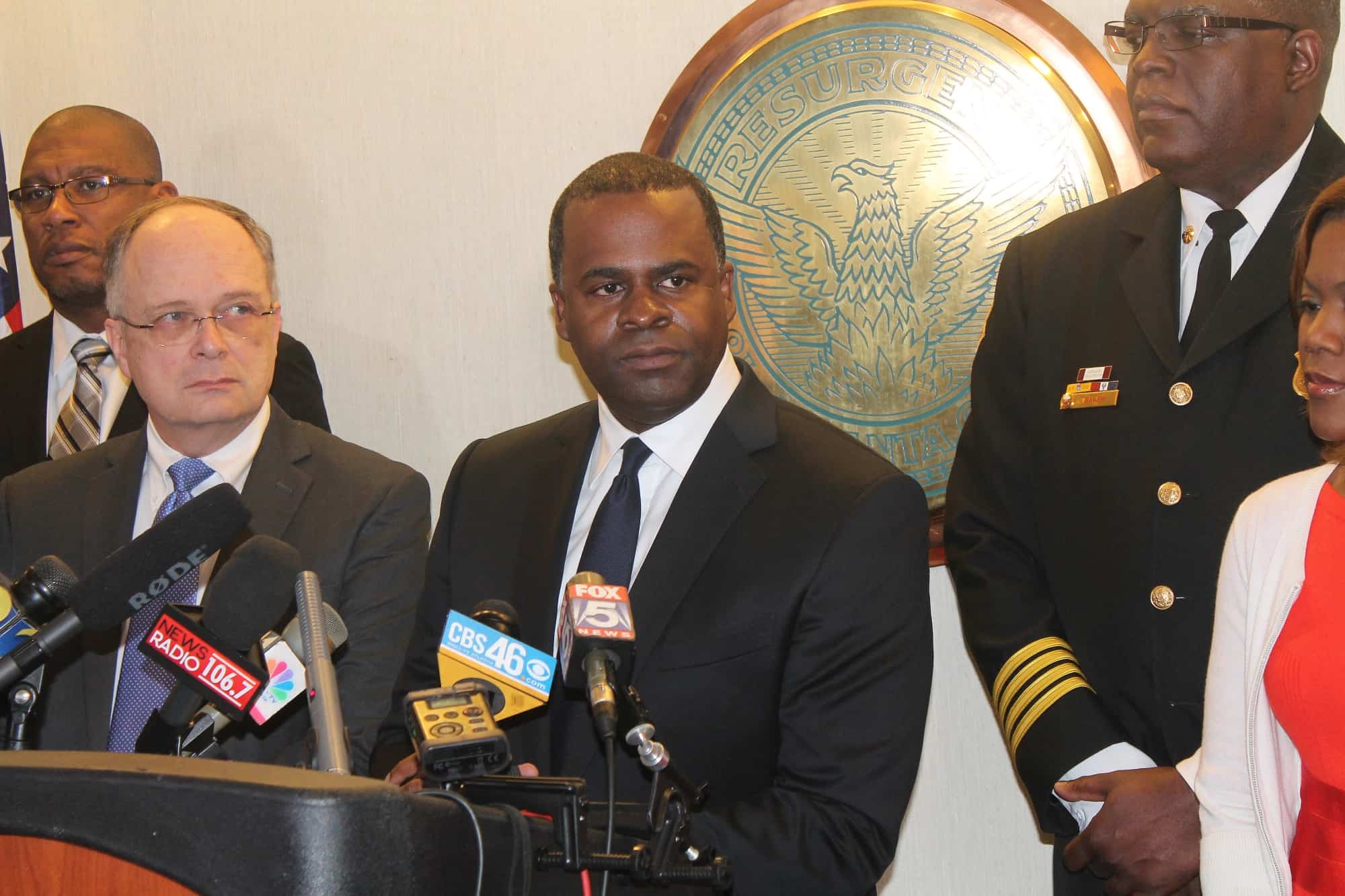 Atlanta Mayor Kasim Reed has seven years’ tenure under his belt, and the field is stacked for the next city leader to take over his office. As the election nears, Georgia Voice asked a few LGBT activists, and Reed himself, to grade Reed’s performance on LGBT issues, and share how the next mayor could do better.

Jeff Graham, executive director of Georgia Equality, said one of the biggest positives is Reed’s openness about his changing feelings on marriage equality. In late 2011, Reed came out in support of gay marriage.

“Most Americans over the last 15 years have dramatically changed their views on the freedom to marry, and I really do appreciate that the mayor was very open with his own process,” Graham said.

In fact, after marriage equality became the law of the land, City Hall was decorated with rainbow lights.

After former Fire Chief Kelvin Cochran released a homophobic book, Reed gave him the boot. He was also strongly against the anti-LGBT House Bill 757, and following the Pulse shooting in June 2016 immediately met with LGBT Atlantans to talk about public safety concerns and attended the city’s vigil in honor of the victims. Reed was also honored by GLAAD.

But some LGBT leaders feel that’s not enough.

“What do rainbow crosswalks do for us? What does closing down the largest homeless shelter in the city that actually houses transwomen do for us?” Bradford said. “I think the next mayor has to have a deep understanding that to actually have LGBTQ people thrive in the city, we actually have to have more work that looks at where LGBT people are intersecting with the police department; where we’re being criminalized; where rates of HIV are highest.”

Fulton County is tasked with targeting the elimination of HIV infection rates, but there are opportunities for the mayor’s office to affect those resources. Mary Hooks, founder of Southerners On New Ground, feels Reed failed there.

When it comes to the relationship the Atlanta Police Department has with the LGBT community, Bradford said the Reed administration had the wrong idea from the start. One issue continuously brought up is the Eagle Raid, which happened before Reed came into office. Graham said the mayor had some issues in the way the aftermath was handled.

“Certainly the lawsuits around the Eagle Raid, the re-training of police officers, I would have to give the mayor very low marks on that. His administration was very resistant to owning up to the fact that the city had just had a grievous error … and was very slow to respond to what the courts had ordered them to do,” he said.

A more recent incident, where Atlanta police shut down parties during Black Gay Pride, is under investigation.

“We are conducting a review of the circumstances around that incident,” Reed told Georgia Voice. “We’re going to publicly report on it. We’re going to make sure it’s a learning experience for us and I have complete confidence that Chief [Erika] Shields will handle that matter in a fair way.”

Bradford feels Reed avoided working with “more radical folks” and groups that “challenge, frankly, the city of Atlanta to do better” because they express anti-police sentiments, but did appreciate some of the LGBT appointments he made.

Hooks, however, said that transgender activist Tracee McDaniel’s appointment was “tokenizing” her activism.

“What actually reflects your values — that you are about LGBTQ lives and black LGBTQ lives — is how you invest money in resources,” Hooks said. “That is a measure of what it means to push an agenda of centering LGBTQ people as mayor.”

Reed said he does not believe in LGBT appointments.

“I believe in full LGBTQ integration throughout every aspect of government, and I think that is one of the reasons we received four perfect scores on the Human Rights Campaign Municipality Index. We’re the only city in the Southeastern United States to do that and the only city in Georgia to receive a perfect score,” he said.

Reed said at the end of his time in office, he’ll “take whatever tomatoes or warts or demerits folks offer,” and asks they point out an Atlanta mayor who did a better job.

“Show me a mayor of Atlanta that’s had a better record on the issues than we have,” he said. “There’s certainly more room for improvement. That’s why running a city is a relay race: you pass the baton.”

“I think there certainly have been some good points and then some real troubling areas. I think that does a little bit of a disservice that there’s not one LGBT issue, there are so many LGBT issues,” Graham said. “In terms of helping keep an inclusive environment, I think that again, something like that would be relatively good. But in terms of advancing innovation on LGBT issues, that’s where the city has just kind of supported the status quo.”

He offered a grade of C+.

“I hope the next mayor will have a stronger record than mine,” Reed said. “I think that we need to work harder regarding young gay and lesbian and transgender individuals who are homeless. I would really like to see greater coordination between the Rush Center and the Atlanta Housing Authority so that young people who find themselves in difficult circumstances … have a safe haven.”

“The next mayor needs to listen to those who are most impacted,” she said. “We need a mayor that’s going to be led by the voices of those in the community who have been there the longest, not the developers, but real people with real lives who actually have a vision for the community that they live in.”