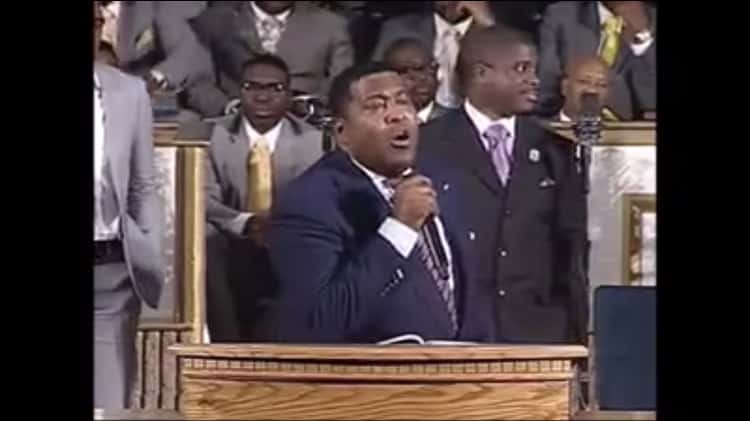 An Atlanta pastor had something to say in a recent sermon about the African-American church's treatment of the LGBT community, and he didn't hold back.

Dr. E. Dewey Smith, senior pastor at House of Hope Atlanta, compared what the church is doing to LGBT people to what slave masters did to the African-American community, and called out people for the hypocrisy of quoting some Bible passages but ignoring others. Smith referenced a conversation he says he had with God, who decried the church's actions.

“You are guilty of condemning the Supreme Court system and preaching against something but if you look at half of our choirs and a great number of our artists that we call abominations and we call demons, we demonize and dehumanize the same people that we use and we don't say nothing about the gay choir director because he's good for business,” Pastor Smith said to the congregation in the video uploaded to YouTube on July 23. “As long as the choir sounds good, we ain't saying nothing about his sexuality. We have done what the slave masters did to us—dehumanize us, degrade us, demonize us but then use them for our advantage.”

He then mentioned the Bible passages often quoted by people to back up their anti-LGBT views, saying, “On one hand you quote homosexuality is an abomination from Leviticus. But you say that right after you ate some shrimp, some catfish and some lobster. You quote Levitucus while you're wearing a wool blend suit. It's also in Leviticus that you shouldn't wear mixed linens. It's in Leviticus that if your wife is on her cycle that you shouldn't go in the same house with her or even sleep in the same bed with her.”

The congregation continued to cheer Smith on throughout the sermon, often standing, clapping and nodding in agreement at the message.

“Here's my point. We pick and choose the scriptures that we want to use to beat folks up with rather than look at our own lives,” he continued. “Look at your neighbor and tell your neighbor I don't condemn you, I don't judge you. I'm going to preach Christ to you, because you can't evangelize and antagonize at the same time. You cannot insult and inspire the same people that you insult.”

He ends the five-minute segment of the sermon with an answer to what to do with LGBT people from then on.

“What are we going to do about the people who been born this way? What about the people that we think are nasty? These folks are abominations, they're nasty?,” he asked. “Tell you what you do then, go find every song that's been written by a gay person in the last hundred years and don't sing it in church. Let's see how many songs you can minister on that Sunday.”

House of Hope Atlanta, located in Decatur, was founded in the late19th century and now has over 11,000 members. View the segment of the sermon below.