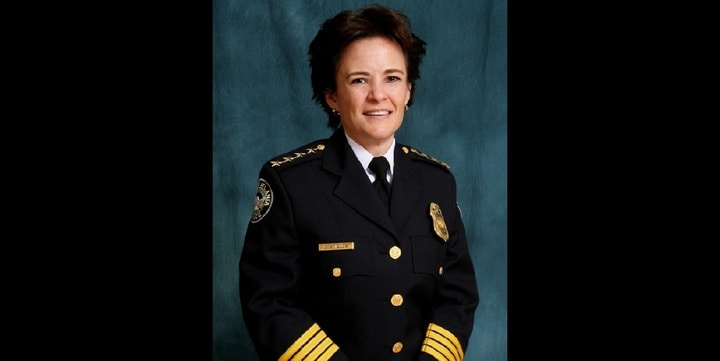 The morning watch commander in charge during the early closure of four Atlanta gay bars over Labor Day Weekend has been reassigned. Atlanta Police Chief Erika Shields made the announcement late Wednesday afternoon, stopping short of calling the actions discriminatory, but conceding that they gave that perception to the owners, managers and patrons at Blake’s on the Park, G’s Midtown, 10th and Piedmont and TEN Atlanta.

“I’m disappointed with the decision by the Zone 5 morning watch commander to force four gay bars/restaurants in Midtown to close two hours early during Black Gay Pride weekend,” Shields said in a statement. “While I do not believe the commander purposely set out to act in a discriminatory manner, his actions certainly gave that perception to bar owners, managers and patrons. Our commanders and officers simply must show more sensitivity to the concerns of our diverse communities.”

The Atlanta City Council previously authorized the bars to stay open two hours past the normal Sunday night closing time of 12:30 a.m. But Atlanta police forced the bars to end events in the early morning hours of Sept. 4, despite TEN owner James Nelson reportedly showing the ordinance to officers on the scene. Nelson later told Project Q Atlanta that “I’ve been in business far too long and I know what happened on Sunday night.”

“There were probably 400 African-American gay men and women standing on the sidewalks in front of G’s and 10th and Piedmont and the Blake’s parking lot. They clearly wanted to shut that down,” he said. “They pulled up in paddy wagons and began clearing the sidewalks. Really, it was an intimidation tactic at first. … It was an abrupt closing and I want to make it clear that we were operating legally.”

A torrent of criticism from the city’s LGBT community followed the department’s actions, with local politicians and candidates weighing in as well. Former Atlanta City Council president and current Atlanta mayoral candidate Cathy Woolard said she was “deeply disturbed” by the incident and added that it was “difficult not to interpret the action as discriminatory against the LGBTQ community.” Atlanta City Councilwoman and Atlanta mayoral candidate Mary Norwood spoke with Chief Shields and said that while she accepted her explanation, she was “quite dismayed” by the incident.

“There are several steps the morning watch commander could have taken to further investigate the concerns bar owners expressed that they had permission to stay open until 2:30 a.m.,” said Shields, who quietly came out in an Atlanta Magazine profile in June. “Those steps were not taken. As a result, I have made the decision to move this commander to another duty in another zone. We also must ensure that vital communications about matters such as extended bar hours are properly relayed to zone supervisors expected to enforce such ordinances. The diversity of its people is one of the City of Atlanta’s greatest strengths. Any perception that the Atlanta Police Department does not respect, and celebrate, that diversity must be dealt with swiftly.”