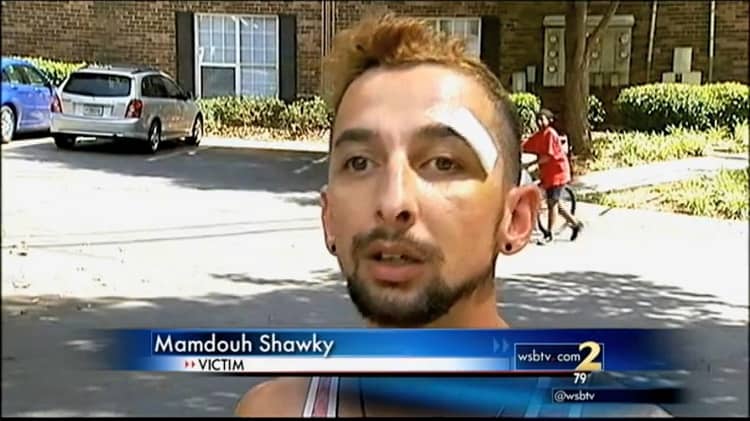 Atlanta police are investigating a violent robbery that occurred in Midtown last week in which an unidentified assailant pistol-whipped one gay man, sending him to the hospital with facial lacerations.

Mamdouh Shawky, 28, and a friend had left the Caribou Coffee at 10th Street and Piedmont Avenue and were walking down Argonne Avenue on the way to the Atlanta Eagle around 11 p.m. on June 9 when they were confronted by two men.

“This one guy came behind us and came really close holding his gun and then another guy came around the front of us and then they just asked us to give them everything,” Shawky tells Georgia Voice.

Shawky says he gave them his wallet and phone but that’s when things got worse.

“The guy that came in the front started hitting my friend and then the other one behind my back, he came with his gun and put it near my face,” he says. “After that he hit me in my face, in my eyebrow.”

The suspects fled and the victims went to a nearby house for help, where neighbors called 911. The two went to Grady Hospital, where Shawky received stitches for a facial laceration caused by the suspect pistol-whipping him. The other suspect, whom Georgia Voice has reached out to for comment, had a laceration to the back of his head. Both were treated and released the next morning.

Shawky, who confirmed he is gay, says there was no indication the crime was motivated by his sexual orientation. The experience has left him second-guessing himself.

“I don’t know why I didn’t just take an Uber or something. Argonne Avenue is not very safe obviously,” he says, adding, “I go out in Midtown a lot and yeah, I would not walk again in Midtown or anywhere for that matter. It’s not a good experience.”

WSB says Atlanta police are investigating if the suspects are responsible for another similar crime in the area, but APD spokespeople would not confirm to Georgia Voice which crime that was at this time.

The incident comes as another in a long line of crimes in Midtown, with a recent 11 Alive report showing a major spike in the area in the first four months of 2015 compared to 2014.

Georgia Voice broke the story of a violent Midtown assault on a gay couple that occurred last March. The suspect, who shouted anti-gay slurs at the couple before pushing one into the street in front of oncoming traffic, was arrested in January and awaits trial. APD Assistant Chief Shawn Jones admitted that the arrest “should have occurred a lot sooner.”

Atlanta police have reported no bias crimes based on sexual orientation or gender identity so far this year.

Meanwhile, a reader tip alerted us to the fact that the APD’s website still lists Senior Patrol Officer Brian Sharp as part of the LGBT liaison unit, nearly six months after he was transferred from the position. Officer Courtney Murphy replaced Sharp, joining Officer Erik King, who was assigned to the unit last August.

When alerted about the outdated information, Atlanta police told Georgia Voice it was an oversight and will be updated today.

A federal judge found the city of Atlanta in contempt of court last month and imposed numerous sanctions for the city’s failure to properly train police officers as mandated in a lawsuit settlement following the unconstitutional raid on the Atlanta Eagle in 2009.

The sanctions included paying nearly $50,000 in attorney fees to the plaintiffs’ attorneys.