When the National Center for Civil and Human Rights opened in downtown Atlanta last June, the LGBT community wondered how many of our stories would be included. The answer was, by most accounts, a fair amount. Nothing mind-blowing, but nothing to march in the streets about either.

Since the Center’s opening, any of its struggles seem less about a lack of content to include from groups representing the African-American civil rights movement, women’s issues, global human rights issues and LGBT issues and more about finding a place in the Center to include all of those voices.

“Folks certainly have commentary,” says Doug Shipman, CEO of the Center. “I get a couple of emails a week that say ‘Why don’t you have anything on this? Why don’t you have more than this?’ It’s something we knew that we were going to deal with, but frankly I’d rather be having that, because that means that people want to be included and they want to be reflected, as opposed to ‘Please no.’”

Little did many know that Shipman and others have been busy behind the scenes, and in an exclusive interview with the Georgia Voice, they reveal exciting new plans about what’s to come.

This summer, the Center will open the LGBT Institute, an international LGBT organization housed in the Center that will include an educational component, programming and an annual awards gala. And opening this fall will be an exhibition delving into the history of LGBT Atlanta.

Center administrators say they could not give a figure on the total cost of the LGBT Institute. The entire 42,000-square-foot facility had an original price tag of $125 million, but that was dialed down to $75 million, according to Center officials.

Catching up with an old friend

Three years ago, Shipman got together with an old college friend, Brian Tolleson, the openly gay CEO of Atlanta advertising agency BARK BARK. After catching up, they started talking about how the Center could tackle LGBT issues.

Tolleson brought up the idea of creating an institute within the Center with the sole purpose to focus on LGBT civil rights around the world, while following the Center’s model of being the convener, not the authority.

“Invite HRC, invite Lambda Legal, invite activists from around the globe to have conversations and celebrate the work everyone’s doing but from an academic perspective chronicling our history,” Tolleson tells the Georgia Voice.

“The notion of combining an academic element with a programmatic element around LGBT issues was one that immediately sparked our imaginations,” Shipman says. “That really birthed the idea of the LGBT Institute.”

Shipman kept that idea in mind as the Center took shape and the grand opening approached, talking with several others in the LGBT community to get their feedback in the process.

One important aspect of the Institute is that it will be housed inside the Center, an organizational reason not without symbolism. It fights back against the notion some have that LGBT rights aren’t civil rights and can’t be compared to the struggles of other disenfranchised communities.

“In the LGBT community and movement, there’s a lot of people working on a lot of different things, so to have a place that’s outside the beltway of New York, D.C., L.A., or San Francisco that’s grounded in the history of the civil rights movement is inspiring,” says Ryan Roemerman, interim executive director of the Institute.

Roemerman says that they will pay special attention to LGBT issues that don’t get as much exposure as others.

“For example in the LGBT movement, you have a lot of conversations around marriage or bullying but there’s a difference between legal equality and lived equality,” he says.

He mentions LGBT seniors and income inequality among LGBT people versus straight people as examples. They also plan for the Institute to be a place that bridges the divide between academics and activists.

Other initiatives on tap include a partnership with Emory University to bring in a visiting scholar to speak on LGBT issues and a partnership with the Point Foundation to identify research fellows to zero in on LGBT research gaps. They’ll use the findings to call for papers to be presented at an annual symposium hosted by the Institute, where academics from around the globe will come to share their knowledge.

Another peg in the Institute’s mission is an annual awards gala called the LGBT Institute Medals, again hosted by the Institute and with separate awards for individuals in general, transgender individuals, governments and nonprofits.

“It’s the combination of not just talking about what needs to be done, but celebrating what has been done,” Roemerman says.

In addition to the educational and awards components of the Institute, there will be a dedicated programming component both online and on a quarterly basis at the Center.

The Institute’s programming board will meet quarterly to set programming goals and assist with outreach to the community. Those named to the board as of now include: poet, scholar, rapper and youth activist Tim’m West; archivists Morna Gerrard and Hillery Rink from the Georgia LGBTQ Archives Project; religious scholar Letitia Campbell; Dr. Michael Shutt of the Center for Diversity and Inclusion at Emory University; Charis Circle Executive Director Elizabeth Anderson; human rights and HIV/AIDS activist Dr. Michael Adee; and Dina Bailey, director of educational strategies for the Center.

While there are currently no transgender members on the board, Roemerman vows that they will appoint one before the Institute opens this summer, and says they are also looking for someone to represent LGBT youth. 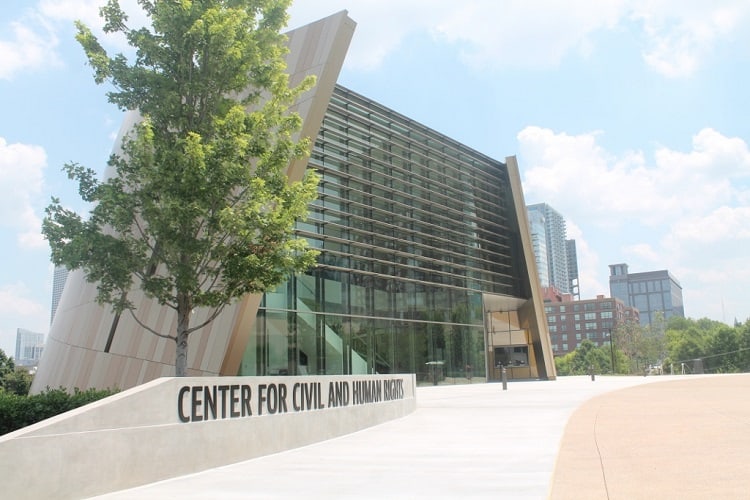 The Center recently hosted a group of 50 college students who were in town for the Stamps Scholars National Convention, with Shipman facilitating a two-hour conversation about lessons from past civil rights movements that could be applied today. Shipman asked the group what they wanted to talk about, and the vast majority brought up transgender issues and other gender issues related to the LGBT community.

“It reminded me that even if you don’t expect the issues to come up, as long as the institution is facile and is aware of how to make those connections, you may have unexpected ways in which they happen,” Shipman says, noting that gender and reconciling religion with LGBT issues were the main topics that came up. “None of that two-hour conversation was about marriage.”

It’s interesting timing that the LGBT Institute will open this summer, a summer that could see the U.S. Supreme Court legalize same-sex marriage nationwide. If so, some say the LGBT community could splinter further, without a singular issue that most in the community seem to rally behind. Who will bring those coalitions together post-marriage equality?

“That’s exactly what the Institute is meant to do; it’s meant to provide that forum for those organizations to come together,” Roemerman says. “When we’ve been talking to folks about this and reaching out to the community, they’re saying that’s why we’d like to have a safe space to go to have some of these hard conversations. To take stock of, ‘Wow we’ve achieved a lot, but how do we live the equality that we’ve achieved legally?’”

“It’s not a knock against entities that have pivoted their concerns around some of the legal issues like marriage equality or religious freedom acts, but I think there are day-to-day experiences of LGBT people that don’t get addressed by that,” he says. “Like people’s quality of life, people’s support in the community and letting them know they’re not alone.”

Charis Circle’s Anderson is glad to know the Institute will be housed inside the Center.

“It shows that LGBT people’s stories and history and lives are not only worthy of dignity and honor but our struggles have always been inextricably intertwined with other social justice movements,” she says. “There’s no way to tell a single history without bumping up against other movements. It feels like an important understanding that we’re complex individuals and that to me is a hopeful way to look at organizing for the future.”

The LGBT Atlanta history exhibition will open around late August or early September along a large wall next door to the room housing Dr. Martin Luther King Jr.’s papers.

“The wall will be an exhibition of the legacy of Atlanta LGBT activism and how that’s a window to the greater LGBT movement,” Shipman says. “Then we’ll go to a very local lens, working with folks, pictures from here, a timeline here, of what’s happened in Atlanta, who have been the people, but then as a way to understand what has happened over time.”

The Georgia LGBTQ Archives Project will be a large part of that exhibition, with speakers and programs occurring through the end of the year. Perhaps even more important, school groups or other groups passing through the Center will be educated on the movement by thoroughly trained docents who will explain the intent and history of the exhibition and engage them in discussion.

“The LGBT community represents everything, all genders, all religious perspectives,” West says. “There’s a huge opportunity to be a light for the nation.”

Summer 2015: The LGBT Institute will open

200,000+ people will visit the National Center for Civil and Human Rights this year