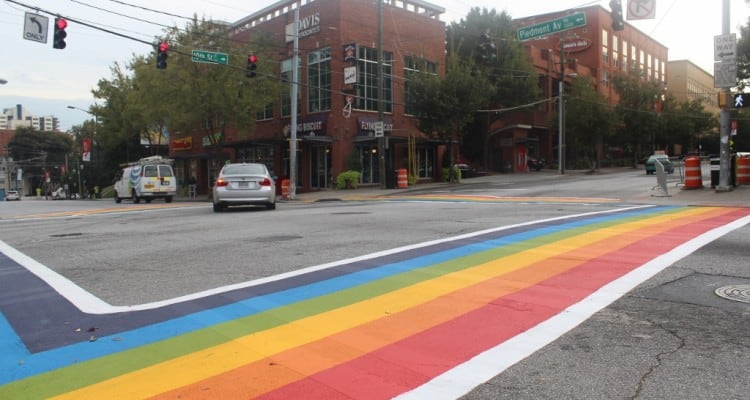 Well, that was fast.

Mayor Kasim Reed’s office announced Thursday afternoon that permanent rainbow crosswalks will be installed this weekend at the intersection of 10th Street and Piedmont Avenue beginning Saturday, July 1 at 5 a.m. through 5 a.m. on Monday, July 3, weather permitting (there’s currently a 50 – 60 percent chance of rain throughout the weekend). Be advised that the intersection will be closed throughout the installation.

Mayor Reed announced the plan to install the crosswalks on June 12, the one-year anniversary of the Pulse shooting.

“I believe that symbols of unity matter; in recognition of the outstanding and ongoing contributions of Atlanta’s LGBTQ community to our city, I am pleased to announce today that the City will install the rainbow crosswalks at the intersection of Piedmont Avenue and 10th Street year-round,” Reed said in a news release.  “This intersection in Midtown is recognized for its history as a hub for Atlanta’s LGBTQ community, and it is fitting that such an important and recognizable place should feature the rainbow flag.”

Temporary rainbow crosswalks were installed just in time for Atlanta Pride in October 2015, with the city saying that safety concerns kept them from making the project permanent.

Talk of making it permanent started up again in April, after local LGBT musician Sarah Rose, lead singer of Sarah and the Safe Word, started a Care2 petition about it. Atlanta City Council President (and mayoral hopeful) Ceasar Mitchell signed the petition at a public event at the corner of 10th and Piedmont on May 23, and several other mayoral candidates chimed in that they supported the move too. Then Reed made the surprise announcement June 12.