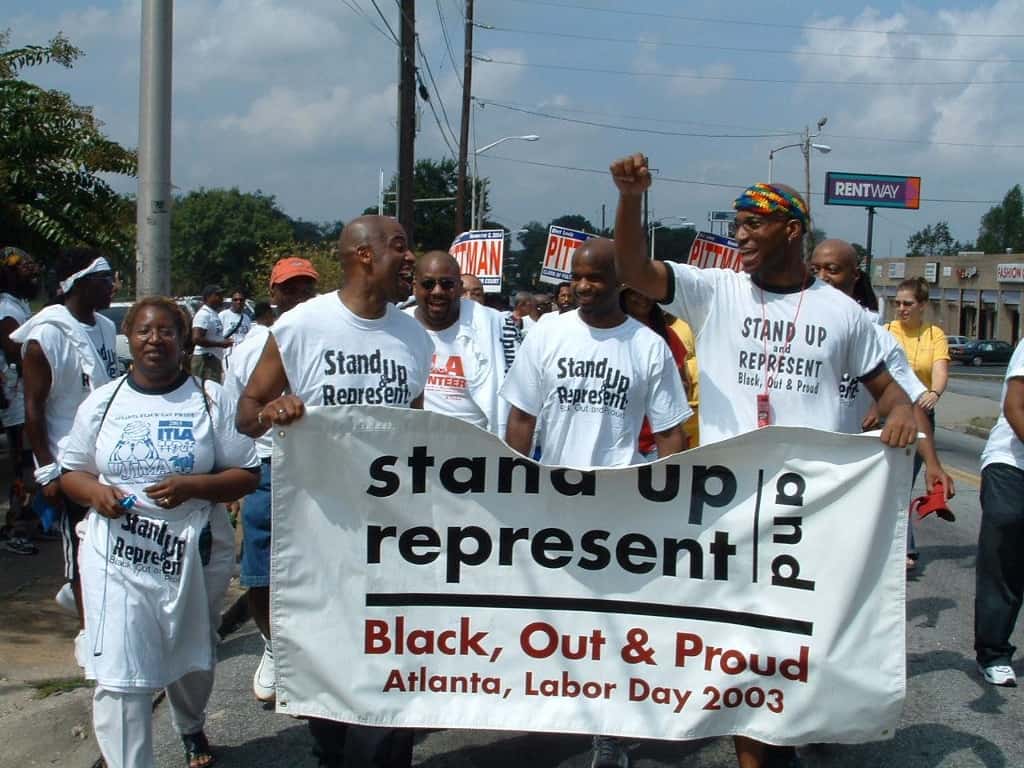 One night in mid-2001, Anthony Antoine had a dream. In it he saw a sea of black LGBT faces marching through the streets of Atlanta, representing, being seen.

He later mentioned the dream to friend and fellow activist Malik Williams, an organizer at the time for Second Sunday of Atlanta, a monthly meeting group for black LGBT men.

“When I shared it with him, his response was, 'Well, why does it have to be a dream?'” Antoine said.

And from that, the Stand Up & Represent March was born. Hundreds of black LGBT people marched from the State Capitol to the Martin Luther King Center that Labor Day as an alternative to the parties and other social events at Black Gay Pride Weekend.

The march grew the next year, and the next, but 2003 would be the last one—until now. Organizers are spurred on, not only by the original goal of injecting the critical ingredient of grassroots advocacy into Black Gay Pride, but also by a series of events that has affected the black and black LGBT communities in 2015.

So on Monday, Sept. 7, they step off from the Mall West End to reignite a tradition.

Growth followed by the stall

With encouragement from Williams about his dream in 2001, Antoine began to rally support from other friends and activists, including Craig Washington, Maurice Cook and Jimmie Scott, a community organizer and board member at the time for Georgia Equality.

“What I brought to the table was the political angle and the media angle and Anthony, he had the dream. And everybody knew Anthony,” Scott said. “Together, we were able to bring other people together and facilitate it.”

And on Labor Day 2001, just as Antoine dreamed it, 200 black LGBT people and allies set out from the State Capitol and made the 1.4-mile march to the King Center.

“I think people were hungry for another way to represent, and to have Black Pride mean something and to charge us to do something with representation so that we're not only representing inside a club or party but also representing for other issues that matter to LGBTQ people,” Antoine said.

With more experience and more clout, the march happened again the following year and 300 people showed up. But they began to question the march route.

“Afterward, we all just kind of lingered around the Martin Luther King Center because nobody wanted to go home,” Scott said, laughing. “That's when it was versed that we needed to end where we could celebrate.”

So in 2003, they moved the end point to Howell Park in the West End. Four hundred showed up that year, according to Scott, with numerous politicians and civic leaders and about 25 organizations, clubs and houses of faith represented, including Georgia Equality, Human Rights Campaign, AID Atlanta, ZAMI NOBLA, Congregation Bet Haverim and more.

However, due to a number of factors, the march stopped ceased after that year. A couple of the organizers moved, including Scott. Others turned the reins over to younger members in the community, but the success of those first three years couldn't be repeated.

The movement to bring back the march began on Martin Luther King Day weekend of this year, with murmurs among the participants at the annual Bayard Rustin/Audre Lorde Breakfast, organized by Washington and activist Darlene Hudson. A new incident of police brutality against the black community seemed to happen every week, the HIV infection rate among young, black gay men was skyrocketing and violence against trans women was on the rise.

Meanwhile, Antoine was in Selma, Alabama, taking part in the Martin Luther King Day march, and was feeling inspired by the award-winning film “Selma.” When he got back, he connected with Washington, and they reached out to Mary Hooks of Southerners On New Ground. Soon Hudson, Cook and Rev. Duncan Teague were on board and the march was a go.

“When you think about police and state violence, uplifting trans lives stomped out in just the last year alone, and also highlighting that the black LGBTQ community is also a part of the Black Lives Matter movement already, I don't see that as a separate community,” Antoine said. “When you think about HIV criminalization and how that particularly impacts black gay men or black LGBT people, that's another reason why we think about marching.

“Everyone has a personal individual reason why it's important to represent, but then collectively I think it also makes a statement about how we see our own lives and our representation in that.”