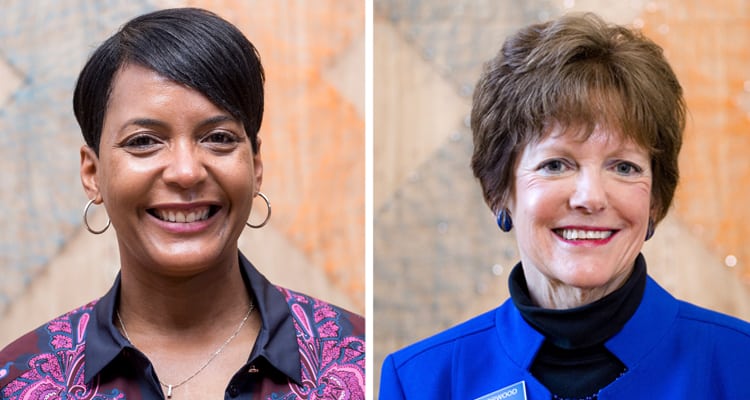 Keisha Lance Bottoms declared victory in Tuesday’s Atlanta mayoral race but her opponent Mary Norwood is demanding a recount. Bottoms bested Norwood by a mere 759 votes in the runoff election according to unofficial returns, surely giving Norwood déjà vu as she lost to Mayor Kasim Reed in 2009 by 714 votes.

“We just don’t know,” Norwood told supporters just after midnight Wednesday at an election night watch party at Park Tavern in Midtown. “This is very close. It is not over yet.”

Norwood said she is waiting for absentee ballots from the military and has questions about two DeKalb precincts. That information likely won’t be available until Thursday at the earliest. She reportedly canceled all appearances for Wednesday to wait for the recount.

Meanwhile, a few minutes after Norwood addressed supporters, Mayor Kasim Reed introduced Bottoms — his hand-picked successor — as the 60th mayor of Atlanta at a watch party at the Hyatt Regency downtown.

“This is about Atlanta. And what we said from day one is that this is about what we hope this city can be for our children’s children,” Bottoms told the crowd. “We stand tonight as one Atlanta.”

“I stand here tonight as my daddy’s daughter and I can say dreams do come true,” Bottoms said. “For those who did not support me, I look forward to working with you as well, because this is still a city for all of us.”

Democratic Party of Georgia Chair Dubose Porter issued a statement Wednesday morning congratulating Bottoms, saying, “Keisha championed our Democratic values and never backed down. With a Mayor Bottoms, we are confident that Atlanta is in good hands for another four years. From the bottom of my heart, I cannot wait to continue to work with Atlanta’s 60th mayor. Keisha Lance Bottoms.

“Keisha unabashedly spoke out against bigotry, sexism and discrimination,” Porter continued. “She stood tall and never flinched under fire. Keisha fought for her city and all of its people with love, determination, a spirit of equity and an offer of justice. This is the kind of leadership Democrats believe in.”

The Georgia Democrats went after Norwood early on in the race, issuing a series of ads and mailers painting her as a closet Republican aligned with President Donald Trump, claims that Norwood — who says she identifies as a progressive Independent — denied.

Bottoms and Norwood courted the city’s LGBT community hard throughout the race. The Georgia Log Cabin Republicans endorsed Norwood (and Ceasar Mitchell) in the run-up to the Nov. 7 vote, and the Georgia Stonewall Democrats announced its support for Bottoms with two weeks to go in the runoff. LGBT support appeared to coalesce around Norwood though after first Cathy Woolard — the lesbian former Atlanta City Council president who narrowly missed making the runoff — and then Georgia Equality endorsed her with six days to go in the race. Those endorsements were announced the day after a forum Woolard hosted with Bottoms and Norwood at the Carter Center.