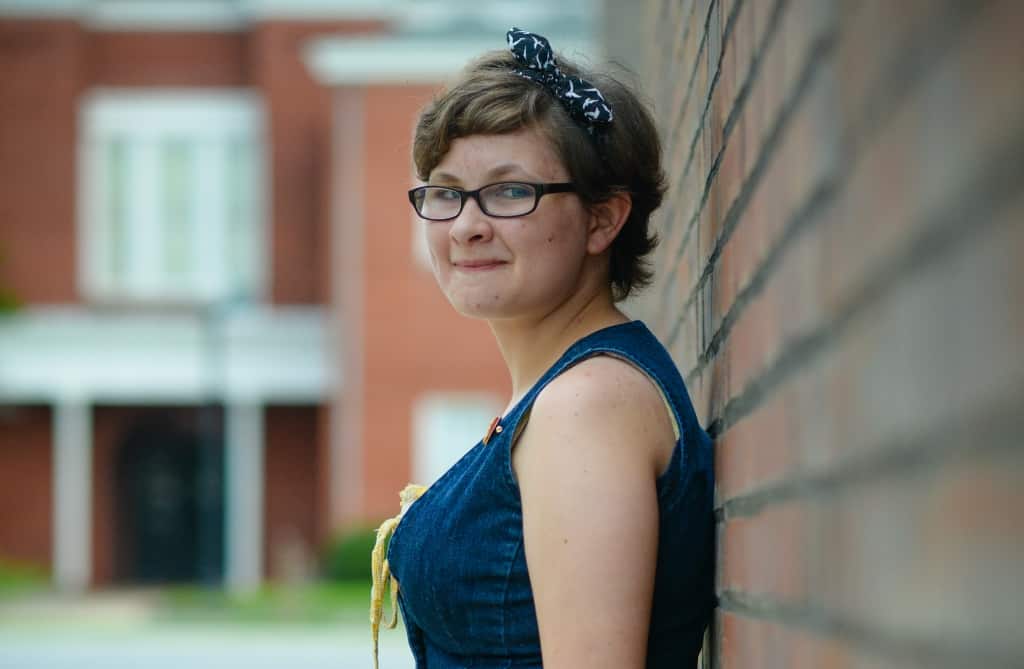 Shelby Hallman had had enough.

The 16-year-old student at Berrien High School in Nashville, Georgia was tired of seeing her gay and lesbian friends pushed around and called “faggot,” “queer” and “dyke.” One of her fellow student leaders screamed in her face that he had the right to call her a faggot if he wanted to.

Instead of wilting, she sprang into action. She went home, started looking online and discovered gay-straight alliances (GSA) and researched exactly what she needed to do to start one at her school so that her and her friends could get some much-needed support. She reviewed school system policy, looked up federal laws and learned that students have a right to start GSAs in public schools.

Even in deeply conservative Nashville, a tiny town of 5,000 in south Georgia.

She lined up a sponsor for the club, an English teacher at Berrien High named Nick Hodge, who didn’t hesitate to take her up on it.

“I believe in human dignity,” Hodge says. “I believe that all kids should be treated well. I believed somebody should have sponsored it and I was honored when she asked me to do it.”

She presented everything to her school principal, who gave her a “maybe” that day, but later came back and turned her down. So Shelby did what few 16-year-olds, much less a 16-year-old in her situation, would do and called a meeting with the principal and the school superintendent. She cited the federal Equal Access Act, which requires that federally funded public schools provide equal access to extracurricular clubs.

It was enough to convince them. They put it before the school board for a vote in May, and the board, nudged along by a letter from the ACLU of Georgia highlighting the legal precedent at hand, voted to allow the club.

And that’s when things got ugly in Nashville.

‘Ask yourselves, is that what you want in our community?’

Beth Hallman and her husband and three kids moved to Nashville two years ago. She called it a generally positive experience, up until she found out from Shelby about the harassment of LGBT students at the school.

When Shelby, who has been out since she was 14, came to her parents to tell them about what was happening at Berrien High and why she wanted to start a GSA there, they did not stand in her way.

“What she was describing what her peers were experiencing was devastating,” Beth says. “So we supported her and told her, ‘Yeah, go ahead.’”

Once Shelby laid the groundwork that led to the all-clear by the school board in May, several local faith leaders got involved to try and put a stop to it.

They circulated a petition against the GSA to local residents, garnering 1,300 signatures. They got several dozen out-of-town faith leaders to sign on as well, and posted the petition in the local newspaper. Then they showed up at the next school board meeting in June to make their case.

After reading the petition in front of the board, Pastor Mickey Lindsey of Flat Creek Baptist Church put up a photograph on an overhead projector. It was a picture he had found online of students at a Pride parade in California, one of whom was in drag.

“Ask yourselves, is that what you want in our community?” he said.

The school board did not change their vote that night, but the dialogue stung.

“We expected resistance but we did not expect the faith-based community to rally around it,” Beth says. “We have so many other pressing issues like the poverty rate, the teen pregnancy rate, meth labs, all these things that small southern towns face, and suddenly, this is the issue? This small group of children?”

Beth posted a lengthy note about the situation on her blog, One Fabulous Mama, showing support for her daughter and decrying the words and actions of the faith leaders. She notes with pride that her own church refused to sign the petition.

“The community doesn’t understand that there is a gay population in their community because the gay population lives in fear of retribution,” Beth says. “There are very few gay adults who are out because their livelihood depends on being in the community, so that culture is there, and that’s very much the culture that Shelby’s trying to change. And she knows it starts in the school.”

“We live in a very conservative, religious climate. Sometimes that’s a good thing but a lot of these kids have been taught a particular way of thinking about their religion and I’ve had students say that gay people should be put to death. I’ve had people say that gay kids are possessed by demons,” he says. “So I would say that that’s not an everyday occurrence but the climate is very real that they have to deal with and I want to be a solution to that problem. I can assure you that I have been attacked several times as of late. I’ve gotta tell you, if they’ll attack me that way then Lord knows what some of these kids are feeling.”

And while he’s fearful of losing his job over the issue, he’s still all-in.

“It’s been difficult for my family but I am absolutely convinced that this is the right decision and if it does cost me everything, it’s a price I was willing to pay,” he says.

‘She’s become an activist. I see that in her.’

For now, the town of Nashville waits to see what will come of the fate of the GSA. Beth and Shelby Hallman cross their fingers and hope the school board doesn’t buckle in the face of enormous pressure from the faith leaders, who encouraged the board to fight the club no matter how much it cost.

The story brings to mind a similar fight in Cleveland, Georgia in 2005 when White County High School cancelled all extracurricular clubs rather than allow a GSA in the school. The ACLU of Georgia eventually reached a settlement agreement which included enactment of anti-bullying policy and annual faculty training sessions on on anti-LGBT harassment.

There’s another school board meeting scheduled for July 20. School starts on August 10. While Berrien High School principal Angie Lovein initially turned down Shelby’s proposal for the GSA, both Shelby and her mother say Lovein and school superintendent Danny Hayes have not stood in the way of the club since turning it over to the school board. Lovein and Hayes did not respond to a request for comment from Georgia Voice.

And while it’s taken a toll on the family, Beth doesn’t hesitate to commend Shelby’s actions.

“I think my daughter is amazing. I am so proud of the person she is,” Beth says. “She’s such a kind person, she’s always fought for the underdog. This isn’t just about the LGBTQ community for her, it’s about human rights. I want her to be a 16-year-old kid and want her to enjoy her high school experience but she’s become an activist. I see that in her.”

Shelby, who has been selected to attend the Queer Youth Leading the South action camp later this month, remains undeterred.

“It hurts my feelings that holy people would feel that way about anyone in our community, and that’s why we need to be more visible. They need to know that queer people already exist in our community and saying they don’t want that isn’t going to make us go away. We’re not trying to attack their faith, we’re trying to uplift harassed and bullied students.”