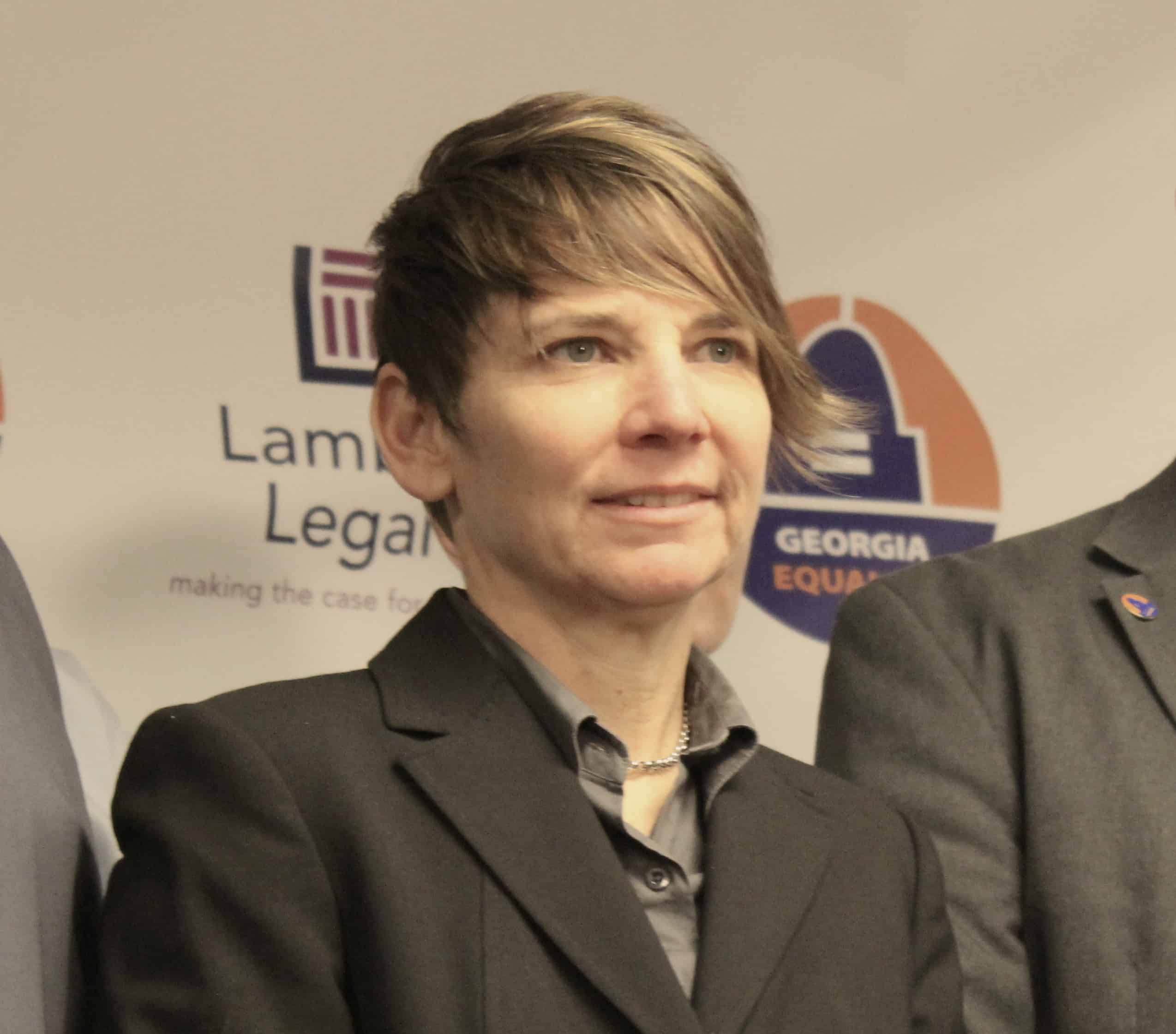 Catching up … with Beth Littrell, attorney with Lambda Legal

Beth Littrell is fighting the good fight. As a senior attorney at the Southern Regional Office of Lambda Legal based in Atlanta, she has had her hand in numerous important cases affecting the LGBT community, but none more so than Inniss v. Aderhold—the federal class-action lawsuit filed in April that is attempting to strike down Georgia’s 2004 same-sex marriage ban.

The West Virginia-born, West Palm Beach-raised Littrell distinguished herself in several ways at the ACLU of Georgia before she joined Lambda Legal in 2007. But she did not travel the usual attorney track to get here—far from it in fact. A bad family reaction to her coming out led her to interrupt her undergraduate studies and move to Atlanta, where she started over and rebuilt her life.

She took a detour into the music industry and became a promoter for Capricorn Records and was the music director at Georgia State University’s WRAS Album 88 at one point. But Littrell couldn’t shake her love for the law, so she worked her way through law school, bartending at Atkins Park and My Sister’s Room while getting her law and journalism degrees at GSU.

The Kirkwood resident has what she calls her dream job and she’s a major part of what would be, if successful, one of the most significant moments in Georgia’s LGBT history.

So Beth, what was it like growing up in West Palm?
It was hot and humid but, you know, it was interesting. It was nice to be near the beach. I think I always felt this weird unexplainable pull to get out of Florida and find a different culture and different weather and more urban and progressive areas. It was a good childhood but it was unsettled until I found Atlanta.

And where did you go from there?
I went to college at Florida State for two years until I realized that my sexual orientation was not heterosexual and I shared the happy news with my family who immediately cut me off. So I found my way from Tallahassee to Atlanta and got a job and started making a living and building a life as an out proud lesbian.

I got a job bartending in Buckhead and it took me a few years to get back into school because I had to pay off student loans that I didn’t know I had. I bartended my way through a couple of degrees and ended up with a law degree.

So they just completely cut you off when you came out?
They cut me off financially in an effort to probably get me to come home where they would have more influence on my decision. But that did not work out well for them. I was queer, this was who I am and there is nothing wrong with that.

We stayed in touch and over the years have patched up the differences. But it was a challenge to move to a big city where you don’t know anyone and establish yourself and rebuild your self-esteem. But Atlanta was a welcome city; I made a lot of friends who I am friends with to this day.

When did you start getting the notion that you wanted to go into a career in law?
I always knew I wanted to be a lawyer. I have been told that I announced that when I was five. When I was at Florida State I was pre-law, but along the way I lost focus for a little while just trying to figure out what I wanted to be and do for a living and remembered that law was a passion that I thought I could be good at. So when I went to law school, I wanted to be a civil rights attorney from day one—in fact I wanted to be an ACLU attorney.

What made you want to get a journalism degree in addition to the law degree?
When I was bartending and living and creating a life, I realized that there was a career that folks could have in music without being a musician. So for a little while my major was commercial music, and I spent a couple of years working for record labels before I got that [journalism] degree. I was actually one class shy of a BA in commercial music before I got offered a full-time job with Capricorn Records.

Then after working in the music business for about a year-and-a-half, I realized what I was doing was just selling art and I didn’t want to be a salesperson—I wanted to be an agent of change. I knew I wanted to be a lawyer and figured that getting a degree in journalism would allow me to use the power of the pen to persuade my way to a law degree.

What made you hone in on civil rights law, besides the fact that you were gay?
My pull to law school and be a lawyer was to be able to use the power of the law to make peoples’ lives better, and I realized that what civil rights attorneys did was not just make peoples’ lives better but make the world better. It’s a powerful platform to effect change so that’s what I knew I wanted to do.

What led you to make the move from the ACLU to Lambda Legal?
I was at the ACLU from 2000 until 2007, and the opportunity to work for Lambda Legal in Atlanta arose and I jumped at it. Number one, it allowed me to focus on LGBT rights full-time. The ACLU of Georgia did all civil rights throughout Georgia with an emphasis on LGBT issues, and Lambda Legal is laser focused on helping people who are LGBT or living with HIV. That was the primary reason, but it also allowed me to work on a national scale. At Lambda at the southern regional office, I work in all 10 southern states.

What’s your favorite thing about the job?
The privilege of getting paid to do something that’s so impactful and so meaningful.

What about some of the challenges that come with the job?
Not being able to help everyone who calls us and needs help. Beyond that, there is no statewide anti-discrimination laws, so we have a lot less legal pull to effect change and to help people out. It’s frustrating to know that in some states you can get fired based on your sexual orientation and gender identity and it’s a difficult road to get compensation on that. There are judges throughout the south making decisions based on their own biases.

But we’re making such progress. It’s become a lot less frustrating because I can see such enormous change and a light at the end of the tunnel for our community.

There was a lot of pressure on you and Lambda Legal as so many marriage equality lawsuits were filed around the country and Georgia ended up becoming one of the last to do so. What was that pressure like?
It was … anxiety-producing. Because we were waiting for the right time and hoping that the community would trust us enough to wait with us. And fortunately they did, and we now have this great foundation of winning cases with 20 judges of different colors and ages and political persuasions who recognize that there’s no justification to continue to exclude same-sex couples from being able to marry. In Georgia in the Eleventh Circuit, it was especially important for that foundation to be laid to have the best chance for success.

But as frustrated as people were whom we talked to along the way, they understood. It was frustrating for them to understand and recognize that timing is everything. But folks got it, in the legal community and in the larger community.

Do you ever foresee yourself not working in areas of LGBT equality or pursuing a different track?
This is my dream job. I’m engaged in this work and challenged and learning every day. My long-term goal is just to become a better, smarter, more experienced lawyer so that I can continue to do this work.