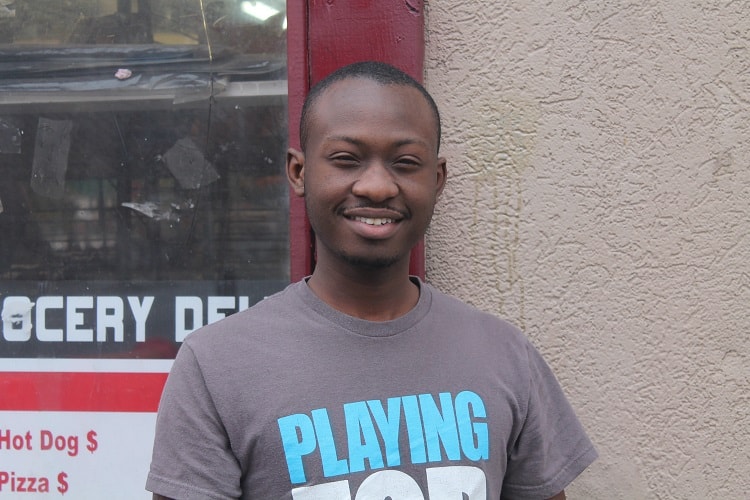 Catching Up … with Brandon White, victim in 2012 Atlanta hate crime

One Saturday afternoon in February 2012, Brandon White was hungry, so the 20-year-old walked into a corner store in the Pittsburgh neighborhood of Atlanta to grab a bite to eat. Little did he know what was waiting for him outside: three members of the Jack City street gang ready to ambush him, and a fourth man holding a cell phone camera.

When he emerged from the store, they attacked. They punched and stomped on him, threw a tire at him, and yelled “No faggots in Jack City!” By the following Monday, the cell phone video of the incident had gone viral, and by Wednesday he was addressing the media in a packed press conference and the circus was underway.

White’s attackers were later caught and convicted, with two of the men convicted in the first case in Georgia to charge a violation of the sexual-orientation section of the federal hate crimes law. They remain in prison, scheduled for release in early 2017. The video of the attack has amassed nearly 1.6 million views to date.

After his attackers were locked up and the cameras went away, it was time for White to pick up the pieces after that random Saturday afternoon. White, now 23 and a lead sales consultant for Comcast living in Alpharetta, spoke with the GA Voice about the aftermath of that day.

So Brandon, the attack happens, the video goes viral and you find yourself in the middle of a media frenzy within a few days. What was that experience like, now that you’ve had time to reflect on it?

It was kind of crazy. You know, you never think that there’s such a community that’s behind you that’s willing to see everything through and see justice is served. I never even reported the incident to the police. The video was found over the weekend and my cousin called me crying, saying, “Brandon, you’re all over TV.” I was like, are you serious?

So I end up going to my other cousin’s house and they had it on the news. I was devastated. Then I heard that the police were looking for me to see if was true. That’s how I ended up meeting Greg [Smith, executive director of the HIV Intervention Project]. They were the first people to contact me and wanted to know my story. He was very there for me. He wanted to make sure everything was okay.

There was a brief time after the incident where the group Change Atlanta called into question whether you knew your attackers or not, and they also alleged you threatened to expose your attackers for being on the down low. The group was later proven wrong. What was it like to be called out like that?

It was kind of sad because it’s like, none of them were trying to get to really know me, to know my character. They just wanted to push the issue. I didn’t know if it was because we didn’t agree with everything when it came to interviews. Then they were going behind what they were saying and reaching out to the [assailants]. I was kind of devastated because one minute they’re quote unquote “my supporters” and then they’re against me.

I’m learning to forgive. All that’s behind me. I spoke to Terik Jackson [member of Change Atlanta] and he apologized to me, which was very noble of him.

What about [Change Atlanta former leader] Devin Barrington Ward? Have you heard from him? [Ward now lives in Washington, D.C.]

I have not heard from Devin.

What was it like looking your attackers in the eye and testifying against them in court?

While they were there, I kind of had a mental block where I didn’t pay them much attention. It was like, I really didn’t want to deal with it. I just wanted to tell what happened and get it over with and move on.

So the incident happens, the media circus, the trial and sentencing. Then it all goes quiet. What was it like when all that went away?

Once everything finally died down, it was kind of sort of getting my life back. You get back to being Brandon. But at the same time, after going through something so strenuous, you’ll never be the same person. Not in a bad way, but in a good way. You want to make sure you make the necessary changes so you’re not put in that predicament again. I’m learning.

Even to this day people will see me in my job and be like, “I know you from somewhere. You’re the guy from the news right?” It’s still kind of in their minds. People don’t forget about you.

But it was pretty cool to get to meet the people I met. John Lewis. Paul Howard the D.A. It was ridiculous under the circumstances that we got to meet, but it was still cool to meet them.

Have you been back to the location of the incident?

I don’t go to that area. It’s just for comfort reasons. Since that time I have gotten a permit to carry so I do now carry. I don’t promote violence but for safety reasons I am registered to carry.

Have you received any threats from anyone from the attackers’ gang?

Everyone pretty much left me alone. I don’t know if the guys even really know who I am still to this day.

Have you seen the video of the incident?

I haven’t. Other than when it’s been played on the news.

After the attack, there was a renewed push for passing a hate crime law in Georgia that didn’t go anywhere. How do you feel that we’re still one of only five states without such a law?

It really shows where peoples’ attention is focused. The LGBT community really isn’t a major priority so it really does make you wonder who are the people we’re really voting for. Are they really on our side or just trying to get a vote out of us?

What would you say to your attackers if you saw them again?

I wouldn’t have much to say. What is there to say? I guess I’d want to know why, if that makes sense.