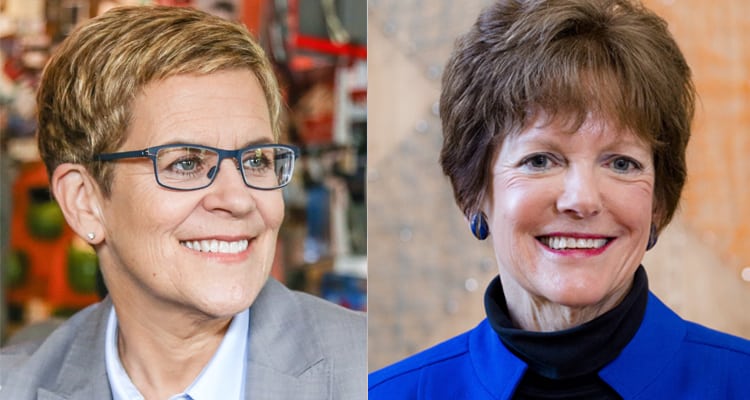 Cathy Woolard endorsed Mary Norwood for Atlanta mayor Wednesday morning on the steps of City Hall, throwing her considerable weight behind the candidate with six days to go before Election Day. Woolard — the lesbian former Atlanta City Council president and first openly LGBT elected official in Georgia history — came in third place in the first round of voting on Nov. 7, garnering 17 percent of the vote compared to Norwood’s 21 percent and Keisha Lance Bottoms’ 27 percent.

Woolard’s announcement comes as Fox 5 Atlanta releases a new poll showing the candidates in a statistical tie in a furious race to the finish. It was the first public poll released during the runoff phase of the election.

Woolard made the announcement the morning after hosting a public conversation with Norwood and Bottoms called #FightingForATL, where they discussed a variety of issues, including LGBT rights. A crowd of several hundred packed the Cecil B. Day Chapel at the Carter Center as Woolard — clad in neon yellow running shoes — peppered the candidates with a series of questions on affordable housing, income inequality, the courting of Amazon’s second headquarters to Atlanta, ethics and transparency, procurement, criminal justice reform and — of course — race. Norwood would be the first white mayor of Atlanta since 1973.

As for local LGBT groups, the Georgia Stonewall Democrats announced their endorsement of Bottoms last week. Georgia Equality endorsed Woolard in the first round of the election and has stayed mum so far on a pick in the runoff.