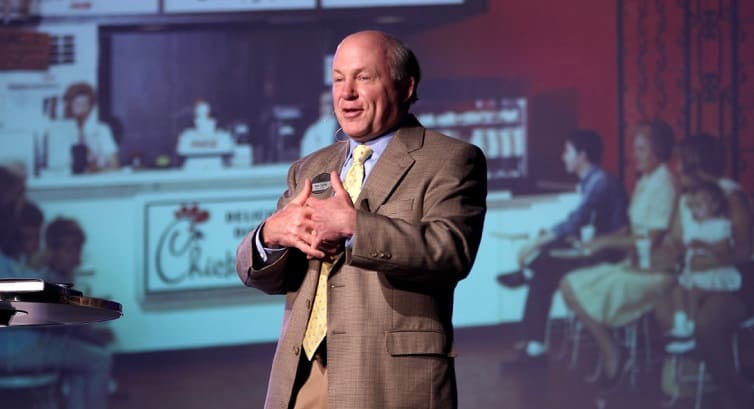 First came reports that Atlanta-based Chick-Fil-A had dramatically cut their donations to anti-gay groups,  and now the fast food giant’s newly named CEO is vowing to keep his views on marriage equality to himself.

Dan Cathy, who took over as CEO after his father, Truett Cathy, stepped down last November, gave a wide-ranging interview to the AJC about this recent about-face.

“Every leader goes through different phases of maturity, growth and development and it helps by (recognizing) the mistakes that you make,” Cathy said. “And you learn from those mistakes. If not, you’re just a fool. I’m thankful that I lived through it and I learned a lot from it.

To get a better idea why Cathy is vowing to keep mum on the topic from now on, you’ll find it further down in the interview.

The company is one of the most successful in the industry, with sales in 2012 of $4.6 billion. To maintain growth, Chick-fil-A wants to move beyond its Bible Belt base into northeast and midwest cities such as New York, Boston and Chicago.

In other words: to move from the number nine fast food chain in the country all the way to the top, it’s time to stop the anti-gay donations, keep your mouth shut about the marriage issue and try to convince the portions of the country with more progressive views on gay rights that you’re politically neutral. You’re Switzerland. Nothing to see here, folks—just sellin’ chicken.

“Consumers want to do business with brands that they can interface with, that they can relate with,” Cathy said. “And it’s probably very wise from our standpoint to make sure that we present our brand in a compelling way that the consumer can relate to.”

Which is smart business of course. Chick-Fil-A has been able to get a foothold in Southern California but hasn’t made much of a dent in the Northeast. Spouting off about personal views on social issues and funneling company profits into making sure those antiquated views stay relevant won’t get you there any quicker.

And it was those two things—the message and the money—that so incensed the LGBT community. Companies can survive and even thrive when their leaders say insensitive or full-on homophobic things—anyone remember the Barilla uproar last September? But if a company is actively pushing profits towards organizations that are trying to keep us from ever being able to get married and that are trying to turn gay kids straight like Chick-Fil-A was, then It. Is. On.

Boycotts ensue. Your mascot becomes fodder for editorial cartoons. Colleges kick you off campus, like Emory University was able to do successfully last March. There went 15,000 potential customers out the window.

And now Georgia Southwestern State University is getting in on the boycott action. The Americus school has a petition running, saying among other things, “Chick-Fil-A does not represent the values embraced by the GSW community, and allowing such an organization to operate on our campus runs counter to the image of GSW as a place of inclusion and affirmation.” There’s another 3,000 potential customers in jeopardy.

What is news, and what people were long curious about, was what would happen once 92-year-old Truett Cathy stepped down and son Dan took over. And now we’re seeing it.

At the end of the interview, Cathy is given a chance to chime in on his opinion of the anti-gay “religious freedom” bills that have been in the news lately here in Georgia and around the nation. And in the first recorded instance of a man being able to literally hold his tongue while speaking coherently, Cathy responds.

“I think that’s a political debate that’s going to rage on,” he said. “And the wiser thing for us to do is to stay focused on customer service.”

So it appears that when it comes to Chick-Fil-A’s bottom line, silence is golden for the Cathy family from now on.

(photo by Steve Cherry via dailyframe.com)