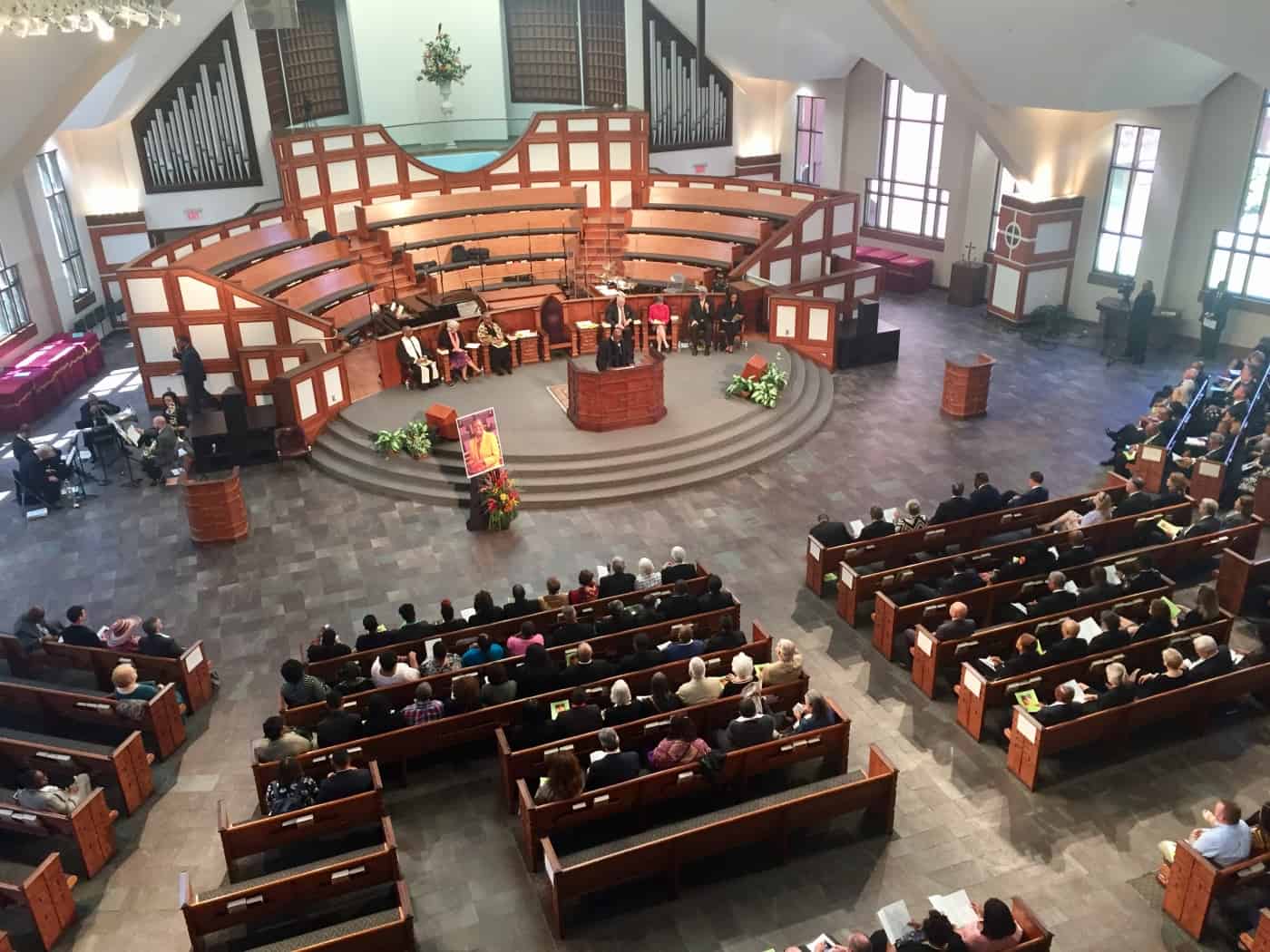 Garner made an impact in a variety of different communities and circles throughout her life, and speakers at the service at Ebenzer Baptist Church reflected on the legacy she left through her work in neighborhoods, as county commissioner, as an Atlanta intown activist, as a champion for those in need and her work in social justice and LGBT rights.

Garner was the co-founder of Southerners On New Ground, the city’s first LGBT liaison (for the late Atlanta Mayor Maynard Jackson), served on the boards of Lambda Legal and the Gay and Lesbian Task Force, was a co-convener of the Atlanta African-American Lesbian Gay Alliance, was an organizer for the first Human Rights Campaign dinner in Atlanta and had a strong commitment to fighting HIV/AIDS, co-founding the Fulton County Task Force on HIV/AIDS among numerous other initiatives.

“People talk a lot today about intersectionality, the theory that various forms of oppression intersect,” said Harry Harkins, one of many to speak about Garner’s legacy at the service. “But, long before that phrase or buzzword, Joan was living it. Joan understood. She got it – that racism, sexism, homophobia, ableism, ageism, xenophobia are all related and all must be combated to achieve the just society that she worked toward her entire life.”

Harkins also called the 2015 U.S. Supreme Court decision on marriage equality “a wonderful crown to Joan’s lifelong work for the LGBT community” and, of her marriage to Fulton County State Court Judge Jane Morrison, who led the Garner family into the church at the beginning of the service, he said, “We have a long way to go, but Joan’s marriage to Jane is a testament to how far we’ve come.”

‘The beacon who could gently show the way’

Mtamanika Youngblood, executive director of the Historic District Development Corporation who served on the board of Sweet Auburn Works with Garner, talked about how their last conversation was an update on a Sweet Auburn project, adding, “I’ll miss her smile, her warmth and her friendship.”

Ross King, executive director of the Association of County Commissioners of Georgia, spoke of Garner’s work on the commission, saying, “In the seven years that I worked by her side, Joan in so many different forms held a presence. Whether she was navigating public policy matters or more recently as she stood up to cancer, I can’t recall a moment where she drifted from her calming manner, beautiful smile and dedication to the task at hand. She drew upon her seemingly endless force of energy and radiated the aura of her presence.”

Civic leader Ann Cramer talked about asking friends for words that described Garner as she prepared the remarks she would make at the service.

“Lighthouse for all. The beacon who could gently show the way. Always grounded in strength and stability. The one who was the headlight on tough topics. Ahead of her time. Sanity in a chaotic world. Regal presence with grace, grandeur and integrity. A wonderful neighbor. Compassionate, caring, enthusiastic, authentic. A woman of vision who was willing to take risks and challenge the system. A trailblazer. A complex person with a simple lifestyle. Empowered and inspired others. Bridge builder, collaborator, coalition maker. She modeled the way for others,” Cramer recalled of the answers she received.

“Both personally and professionally, she devoted her life to being of service,” Collard said. “Beyond rhetoric, her values and principles were revealed in the way that she lived her life. She exemplified what you can accomplish when you allow your compassion to manifest in your deeds.”

The service ended with a benediction by Ebenzer Baptists Senior Pastor Rev. Raphael Warnock, but not before longtime Atlanta LGBT activist Rev. Duncan E. Teague and Charis Books & More Founder Linda Bryant traded off turns consoling those in attendance and adding to the chorus of voices honoring Garner’s life.

Bryant spoke of Garner and Morrison’s love for each other and of sitting with Garner in hospice care, listening to the song “God Is Here,” and Teague summed up her accomplishments and tenacity.

“This is a project of saying something important about her life that has already been done, because Joan Garner did the work while she was here. She heeded many calls to come and help, or just to come by and see how this idea sounds or that idea might work, because she could both inspire and she could aspire for our common good,” Teague said. “We are challenged by the examples set by Joan because she went ahead and did good, sometimes difficult work whether we were ready for her or not. She answered the request to do civic work, foundational work, cultural work, social change work and whether we knew we had the funding or not, because then she’d teach you how to fundraise. Joan just kept going. She came out from behind what would have been an obstacle and just kept doing the work. She kept doing her duties, and all the while still being Joan Garner from DC.”