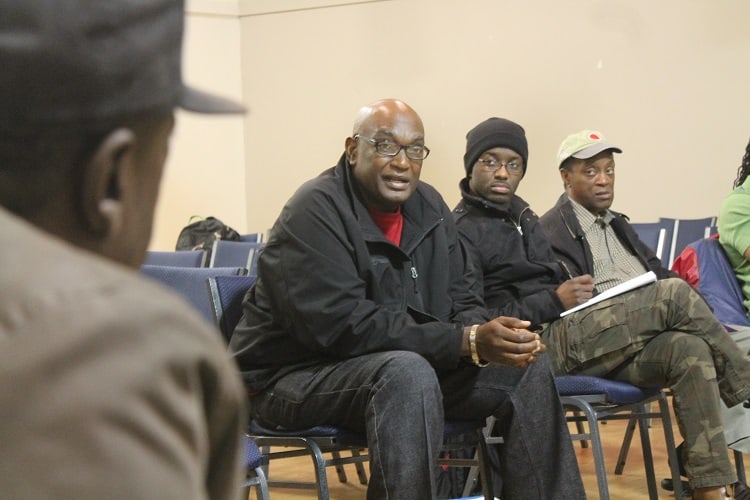 One recent Wednesday night at the Philip Rush Center, a group of black gay men gathered to have a discussion. It was following a screening of the late Marlon Riggs’ 1992 documentary “No Regret,” which featured first-person accounts from various black gay men living with HIV.

The group listened politely as one of the members talked about the documentary and how, since he in his late 20s, the issue doesn’t hit home for him.

“I’m not HIV [positive] and I don’t know very many people who are,” he said. “I know one person.”

And with that statement, a lively dialogue kicked off, with most in the room challenging the notion that a black gay man of his age in Atlanta could know only one person living with HIV.

It’s the exact kind of discussion that organizers Georgia Equality and the Counter Narrative Project hoped would occur, as the two organizations came together to present The Blueprint Dialogue, a three-part series that concluded with the “No Regret” screening and exceeded expectations.

To know how The Blueprint Dialogue came about, the origin of the Counter Narrative Project needs to be explained.

A few years ago, activist Charles Stephens took part in a workshop with young black gay men and one of the participants talked about how as a little boy he liked doing cartwheels. One day his father “caught” him and beat him because he didn’t think little boys should do cartwheels.

“I was absolutely horrified but also very connected because that was a place a lot of us had come from,” Stephens says.

It was the beginning of a series of discussions over the proceeding years that led to Stephens creating the Counter Narrative Project in January of this year.

Stephens hopes to achieve these goals through three pieces of programming that the group offers: rapid response messaging (through media engagement and issuing statements), community education (through webinars and workshops) and weekly strategy calls.

Stephens looks to honor the past in order to ensure the future of his subcommunity.

“There’s this amazing tradition of black gay men that used their voices really powerfully and spoke out against injustice. That’s the legacy we want to build upon,” he says. “We believe black gay men should be the authors of our own stories and [the Counter Narrative Project will] provide a space to do that.”

‘I wanted to try to spark a different kind of conversation’

Fittingly enough, The Blueprint Dialogue series started because of a conversation.

This talk was between Stephens and Georgia Equality executive director Jeff Graham, who both marveled at the amount of innovation that had occurred in the HIV realm over the last several years. Both also shared not only an affinity for the arts, but also a desire to use art as a tool to foster critical conversations and build communities.

Stephens says Graham invited him as a kind of “activist in residence” to bring those concepts together as they relate to black gay men. Through that collaboration, the Blueprint Dialogue series was born.

“Normally when HIV conversations happen, it’s around risk or statistics, and those have merits but I wanted to try to spark a different kind of conversation,” Stephens says.

Graham immediately saw the need for such a conversation.

“I think so often we don’t give enough value to the lived experiences of what it means to be black and gay or bisexual or same gender loving here in Atlanta,” Graham says. “So really, the role of us at Georgia Equality is to be able to provide that space to allow those conversations to come about.”

The series included three weekly documentary screenings, all having to do with black gay and bisexual men’s HIV/AIDS activism. Each screening drew 80 to 90 black gay men of various ages and backgrounds—a strong showing, as anyone who has organized or attended a gay weekday night event in Atlanta that isn’t a bingo or trivia night will attest.

While there are no immediate plans to put on another Blueprint Dialogue series, Stephens and Graham definitely found a need for such events, even in current times.

Graham concurs, saying, “Certainly as part of that series there was a lot of talk about a rich vibrant history of black gay men’s advocacy that is so often overlooked and unfortunately way too forgotten by the more mainstream and certainly by the white LGBT movement. We really see this as the beginning of a conversation.”

Stephens already has plans to launch a series of Counter Narrative Project workshops in 2015, with hopes of building on the group’s first year in existence.

“Our best selves can emerge from these kinds of stories,” he says.