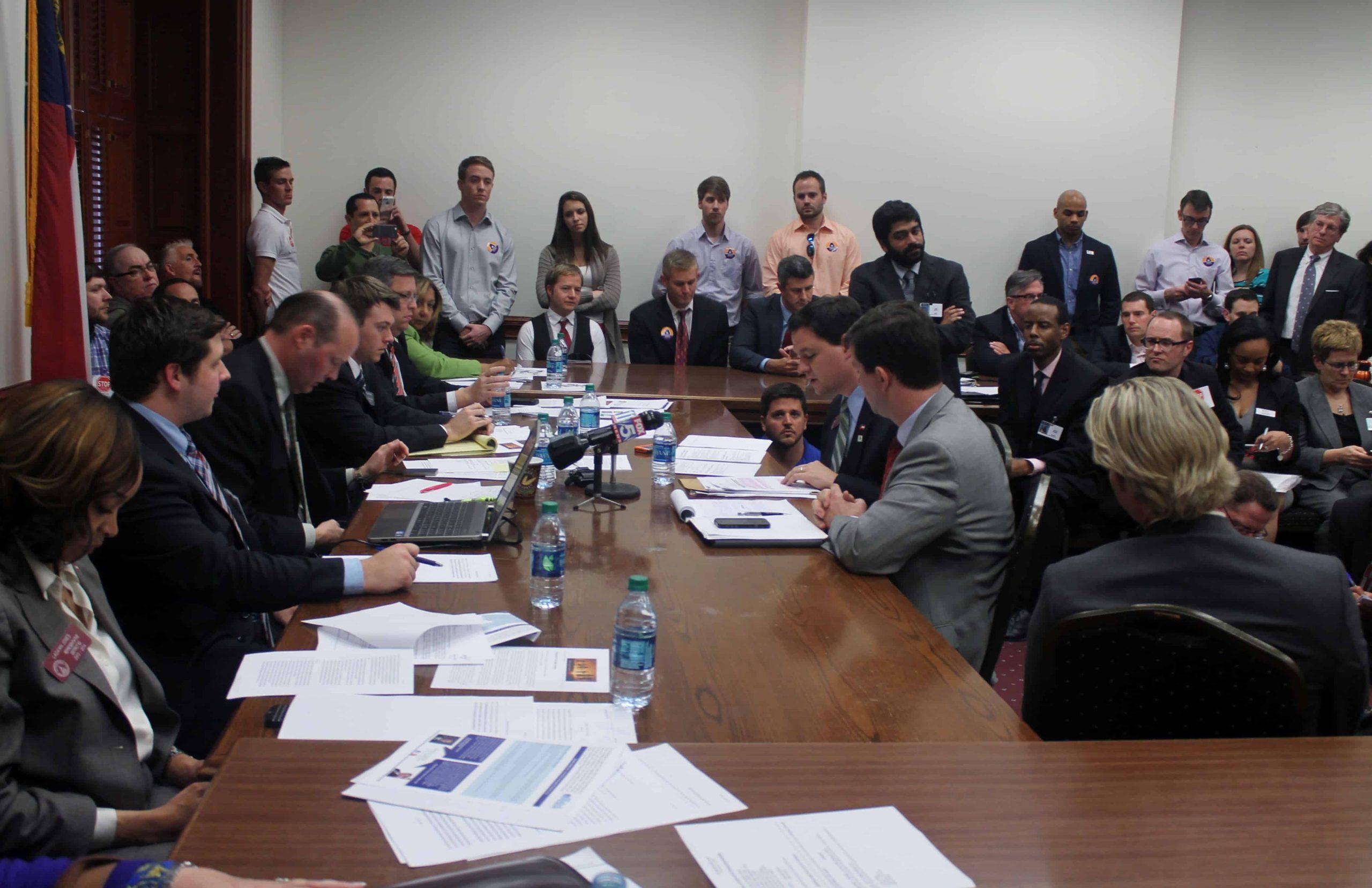 After a two-plus hour delay and another hour to watch another bill get presented, the HB1023 bill that could open Georgia’s LGBT residents up to even more discrimination was introduced tonight before a capacity crowd spilling out into the Georgia State Capitol rotunda. But last-minute amendments by the bill’s lead sponsor, Rep. Sam Teasley (R-Marietta), led to some confusion in the room and after a handful of speakers–all against the bill–used their time, the subcommittee chairman brought it to an end for the night with plans to reconvene later this week.

The delay was due to the full house judiciary committee attending an earlier hearing that ran long, pushing the 3 p.m. scheduled time back to past 5 p.m. Then HB 684, which is about extending the amount of time before a divorce is granted and requiring divorcing parents to take educational skills building classes, was heard. A chunk of anti-HB 1023 attendees left before the bill was finally brought before the subcommittee, but the majority of the mainly LGBT crowd stayed for the entire night.

Politicians, community leaders, religious leaders, business owners and private citizens flooded the room throughout the night. State Senator and gubernatorial candidate Jason Carter stopped in for a quick greeting to the assembled crowd but did not make any remarks on the bill.

“This is of great interest to our community,” said openly gay Rep. Simone Bell in her remarks to the subcommittee. “It’s not about a cake, it’s not about a wedding event. It’s about us being able to live our lives fully, not as second class citizens but being able to go through this world as the people we were created to be.”

“Please understand that as someone with a background in theology and religious studies, I value religious freedom and applaud efforts to ensure that diverse views are always heard and respected,” Georgia Equality Executive Director Jeff Graham told the subcommittee. “However, as a gay man, I can assure you that the vast majority of derogatory comments I have heard and the primary arguments used to prevent my community from achieving legal equality are rooted in what people profess to be their religious beliefs or their personal interpretation of a few selected biblical passages.”

HB 1023, the so-called “Preservation of Religious Freedom Act” is a very broad bill that is causing major concern in the LGBT community. The state Democratic Party calls it, along with SB377, “dangerous and immeasurable in scope.” The state of Arizona legislature passed a similar bill which is awaiting Gov. Jan Brewer’s signature or veto.

Graham later told The GA Voice that he hadn’t seen the community come out like this on an issue since 2004.  “If we could get this many people out to support pro-LGBT legislation like Rep. Karla Drenner’s Fair Employment Practices Act or Rep. Keisha Waites anti-bullying bill [HB 816] we would likely see movement on them,” he said.

But for now it’s a wait for the amended version of HB 1023, followed by the legal opinions of the changes, and a second hearing that could occur with just a few hours notice either today or tomorrow in all likelihood, so the community is advised to keep an eye on their email and social media for updates.

More details from tonight’s hearing to come, with more information about the scheduling of the next hearing and Georgia Equality and Lambda Legal’s response to the amendments once they are released.