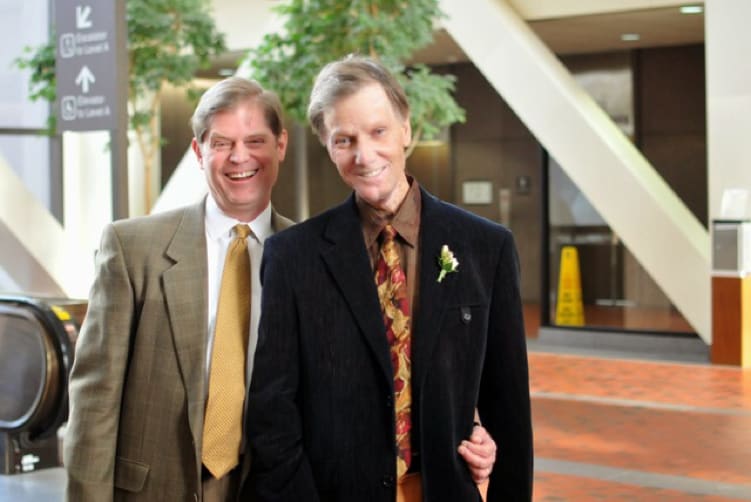 Georgia couple Dan Walter and Jay Beadle planned to spend the rest of their lives together. That was before Beadle was diagnosed with non-Hodgkin’s Lymphoma in 1999 and head and neck cancer in 2010. In a committed relationship for 21 years, the couple legally wed in Minnesota two months before Beadle’s death in Jan. 2014.

Walter, Beadle’s surviving husband, is now fighting along with his attorney’s at the Civil Rights Education and Enforcement Center (CREE) and Lambda Legal to amend the terms of  Delta’s pension plan to allow surviving spouses like Walter who were married to long-term Delta employees to receive survivor benefits. Delta’s current policy requires couples to be legally married for at least a year in order to be eligible for benefits. Lambda Legal and CREE have sent a letter urging Delta to to amend the plan retroactively to modify the one-year marriage duration requirement as Walter and Beadle were unable to marry under Georgia law prior to the Supreme Court ruling in Obergefell v. Hodges in June.

“Just because federal pension law allows these kinds of duration requirements does not make them fair or equitable,” says Julie Wilensky, Director of CREEC’s California office in a statement. “It is time for Delta and other major employers—many of whom are allies to the LGBT community—to update their boilerplate policies and remove this hurdle that affects same-sex couples who were barred from marriage for so long.”

Delta has been a proud supporter of Georgia’s LGBT community and openly celebrated the Supreme Court ruling in June, noting that as a result of “the court’s decision to fully legalize same-sex marriage in all states and jurisdictions…, Delta will be able to provide an equitable benefits package to all Delta people.”

Beadle served Northwest/Delta faithfully for 36 years at the time of his passing. According to Lambda Legal, “he was so dedicated to his life’s work that he requested that his obituary express his fondness for his job and the company. Jay’s former Vice President at Northwest, Lloyd Warren, delivered the eulogy at his funeral and spoke movingly of Jay’s love for his work, and how he was a role model for his coworkers with his attitude and dedication.”

Not surprisingly, Walter is heartbroken by the loss of his husband and the unfair treatment and denial of spousal survivor benefits by Delta Airlines.

“Jay and I were blessed with more than 20 years together, taking care of each other in all the ways that a committed couple would–physically, emotionally and financially,” says Walter. “When Jay became ill, we worked hard to try to make sure everything was taken care of. We couldn’t have imagined after all his years of service with Delta and how well they have treated us over the years that I would be denied a claim because of something beyond our control. I really hope Delta will get this straightened out before anyone else has to go through this.”

Lambda Legal notes that this would not be the first time a major company has retroactively applied benefits: “CNA Financial Corporation amended its plan to allow a plan participant and his or her same-sex spouse married for less than a year to be considered as married for a full year if, at the date of death, they (i) lived in a state that either did not recognize their marriage or recognized their marriage for less than a year, and (ii) they can prove that they were in a committed relationship for at least twelve months.11 Northwest/Delta should follow suit.”

The full letter sent to Delta by Lambda Legal is available online.