The two Democratic incumbents faced off in the July 31 primary after Republican redistricting drew them into the same district. The winner will face Republican challenger Earl Cooper in November.

“I am proud of my team and the hard work we put into our campaign to continue serving our friends and neighbors in District 58,” Bell said the morning after the election. “This is only the beginning. We have a lot of great work ahead and I’m looking forward to the journey.”

Long conceded the race at about midnight with a posting on Facebook.

Rep. Keisha Waites, a lesbian who won office in a special election in February, handily won her bid for her first full term in House District 60  against three challengers, taking more than 66 percent of the vote.

“It was a great and hard fought victory. I attribute it to building a broad and diverse coalition of support. I am humbled by the voters,” Waites said Wednesday morning. “They spoke and spoke loudly. I look forward to returning to the capital and finishing the work we started.”

There was no Republican candidate, so the Democratic primary essentially decided the race.

But in House District 57, Rep. Rashad Taylor, who came out as gay last year while serving in the General Assembly, lost his reelection bid  to Rep. Pat Gardner, a Democratic incumbent with a history of supporting LGBT rights.

As with Bell and Long, the two were drawn into the same district by Republicans during redistricting. No Republican candidate ran, so Gardner will be unopposed in November.

“I’m disappointed I didn’t win. Campaigns are tough,” Taylor said Wednesday morning. “Pat and I will I think always be friends. This was an unfortunate part of redistricting and I think the Republicans would have been happy either way it went.”

On Tuesday night, Gardner described the race as “exhausting but one of the most exhilarating races I’ve ever run.”

She also described having to run against Taylor, a fellow Democratic incumbent, as “awful.”

“Running against a friend is the worst thing that could have happened to us,” Gardner said. “But that’s what the Republicans wanted ― and got.”

Two openly gay men lost their bids for seats in the General Assembly.

He faced off with former state representative “Able” Mable Thomas, who had supported LGBT rights in the past and was seeking a return to the Gold Dome. With 100 percent of precincts reporting, Britt had 35.28 percent of the vote, compared to 64.72 percent for Thomas.

Britt was the executive director of the law firm Alston & Bird for nearly 30 years before taking early retirement.

He is a longtime veteran of Atlanta’s LGBT scene, serving on such boards as AID Atlanta, Georgia Equality and also as co-chair of the national Human Rights Campaign.

As results tricked in Tuesday night, Britt said he would continue to work on behalf of the LGBT community regardless of the outcome of the race.

“This would never have happened without the support of the LGBT community,” he said. “I’m proud to be the gay godfather,” he added, referencing the nickname some of bestowed on him due to his years of work on gay issues.

Britt conceded the race in an email statement the next morning.

“We did not achieve the hoped-for result in yesterday’s election,” Britt said, “but I would like to thank every person and organization who gave this campaign the incredible strength and momentum it had.”

William Phelps, a gay veteran, faced an uphill battle in his attempt to unseat Rep. Margaret Kaiser in House District 59 , especially after LGBT political groups endorsed Kaiser, who has been an ally on gay rights issues.

With 96 percent of precincts reporting, Kaiser had 81.92 percent of the vote.

Attorney Jane Morrison proved successful Tuesday in her bid for a seat on the Fulton County State Court, which would make her one of the first openly gay judges  in Georgia and the Southeast.

With 99.43 percent of precincts reporting, Morrison had 60.86 percent of the vote, while Melynee Leftridge had 38.87 percent.

“I just really appreciate the broad support from all communities,” Morrison said Tuesday night after declaring victory in the race. 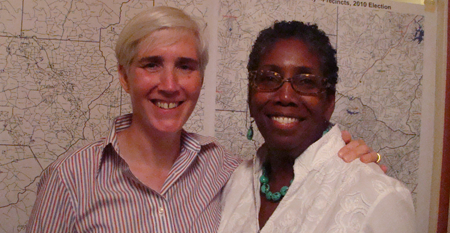 The two were competing for the seat left open when Judge Brenda Cole retired after serving 14 years on the bench. State court handles misdemeanor criminal cases such as DUI and civil cases including contract cases and personal injury cases.

Morrison moved to Atlanta nearly two decades ago and has practiced in Georgia for 18 years. She was one of the founders of the Stonewall Bar Association. In 1997, Lambda Legal, an LGBT non-profit legal organization, opened a Southern Regional Office with Morrison as its first regional director.

Morrison has her own civil practice where she works full-time, but she is also a part-time solicitor for the cities of Sandy Springs and Johns Creek. She’s also served as a judge on a part time basis for Atlanta Municipal Court as well as a part-time Fulton Magistrate judge.

At least two gay candidates were on the ballot Tuesday in local races in Georgia cities outside the metro Atlanta.

In Rome, gay Democratic Party leader Gary D. Harrell was unopposed in the primary for the Post 2 seat on the Floyd County Commission. Based on Tuesday’s results, he will face Republican incumbent Commissioner Garry Fricks in the November election.

In Columbus, Jeremy Hobbs, who is openly gay and HIV positive, hoped to parlay his experience as an advocate on civic and HIV issues into a seat on the Columbus City Council.

Hobbs managed a respectable showing against incumbent Red McDaniel, who is 80 and has served on the Columbus City Council for 36 years.

Hobbs took about 42 percent of the vote, compared to 58 percent for McDaniel, according to the Columbus Ledger-Enquirer.

“It was a close race, and I was happy that we got so many votes,” Hobbs told the Columbus newspaper. “But Red did it again. I guess you just can’t beat the Big Red Machine.”

Bottom photo: Jane Morrison (left) with partner Joan Garner, a Fulton County Commissioner, was elected as one of the few openly gay judges in the Southeast when she won the election for Fulton County State Court. (Photo by Ryan Watkins)