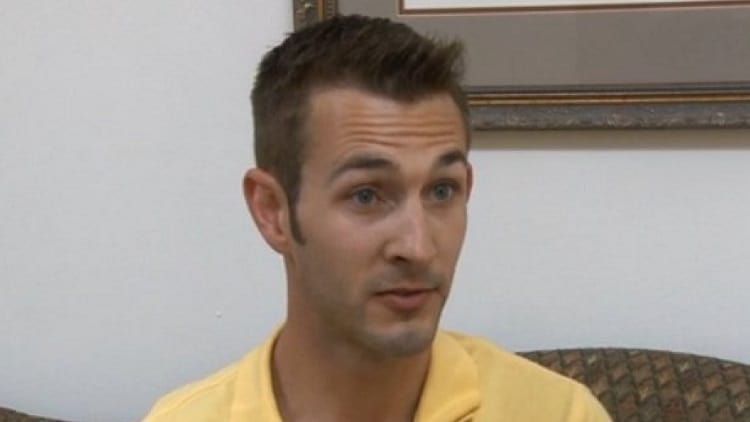 New details have emerged in the case of Flint Dollar, the gay band director and music teacher who was fired from Macon’s Mount de Sales Academy for planning to marry his partner. Dollar reveals that he notified the school about the wedding back in late 2013, and the Catholic prep school renewed his contract just weeks before they fired him.

Dollar, 32, tells The GA Voice that he informed the school he was gay in his first job interview back in 2010. He has been upfront about his sexual orientation ever since since being fired from a church in 2004 once it was revealed he was gay. “I don’t want to put that time and energy into it and then have that taken away,” he tells GA Voice.

Late last year, Dollar informed school administrators that he was planning on marrying his partner the following July. The school took no action nor gave any indication that this would be an issue. “This was not news to them,” Dollar says.

The school has all of their teachers on one-year contracts, and on May 1, Dollar sat down with school President David Held and was given a contract renewal as expected. Both men signed the contract, and GA Voice has obtained a copy of the signed contract viewable at the bottom of this post.

Dollar then walked into Held’s office, where Held told him his contract was not going to be honored.

“I was shocked. I was not expecting that because I had been open and honest and they had known for at least five months,” he says. “To have that be the reason was shocking and it took me a minute to find…to have a conscious thought. It was ‘I can’t believe this is actually happening.’”

What made the issue more bizarre was that not only does Mount de Sales’ online non-discrimination policy include sexual orientation, it goes even further and includes gender identity and gender expression. And Dollar tells The GA Voice that the non-discrimination policy in the faculty handbook goes that far and then some, including equal employment opportunities regardless of HIV status.

However, the contract he signed does include a morality clause, which the school may be using as grounds for dismissal in Dollar’s case:

The School may discharge the Employee at will and thereby terminate this Contract at any time. Cause for discharge shall include, but is not limited to: incompetence, insubordination, willful neglect of duty, cruelty to students, immorality, violation of any provision of the Contract and other failure, neglect or action on the part of the Employee which the school in good faith, determines to impair substantially the Employee’s performance as a member of the school team.

‘My students get the point’

After leaving the meeting with Held, Dollar went straight to the school’s principal, who he has been friends with since before he came to Mount de Sales. He says she told him she had no idea it was happening, and apparently no one else at the school knew.

Well aware of how rumors can spread at educational institutions, Dollar’s next move was to get to the parents of his students.

“Not to stir anything up but to stop rumors from spreading. That intention was not heard completely but the response from them was overwhelming,” he says.

Parents and students were outraged. They demanded a meeting with Held, which took place the following day, May 22. A “Save Flint Dollar” Facebook page sprouted up. A rally was held at the school the following Friday morning.

Dollar was not prepared for the media onslaught and is eager to make clear he was not involved.

“I didn’t contact the media—the parents of my students did,” he says. “I have granted interviews because I wanted to teach my students to stand up for what they believe is right, that you do it respectfully and calmly. State your purpose and let your words be your words.

“My students get the point,” he continues. “They believe that what the school did is not right. They get that to get their point across, instead of opening an attack, they need to have a dialogue. They want answers and they want closure and they’re not being given that.”

Dollar says he doesn’t expect the school to change their mind, and while at first he was open to returning, the school’s response has made him less likely to do so. Held sent an email to parents last week explaining how they handle “personnel decisions” without mentioning Dollar or the controversy. As the uproar grew, a statement from the board of trustees was posted to the school’s homepage, saying this “personnel decision” was due to the school’s commitment to honor the teachings of the Catholic church. Again, Dollar’s name was not mentioned—he is addressed simply as “the band director.”

Dollar has been in touch with several local and national LGBT organizations, including Georgia Equality.

The group’s executive director, Jeff Graham, tells GA Voice that since Mount de Sales is a private religious school, they would be within their rights to fire Dollar, likely even if we had a state or federal Employment Non-Discrimination Act.

“However, his firing does highlight the need for stronger laws on both the state and federal level that protect people against workplace discrimination based on their sexual orientation or gender identity,” Graham tells GA Voice. “It is important to people to realize that these events do happen and that internal policies, while an important indicator of an organizations values and commitment to diversity, won’t necessarily protect employees against discrimination.

“This is why we must continue to push for state and federal laws,” Graham continues. “Knowing that his termination was directly tied to his engagement and plans to marry also prove that winning the freedom to marry is only one step towards achieving great equality for the LGBT community.”