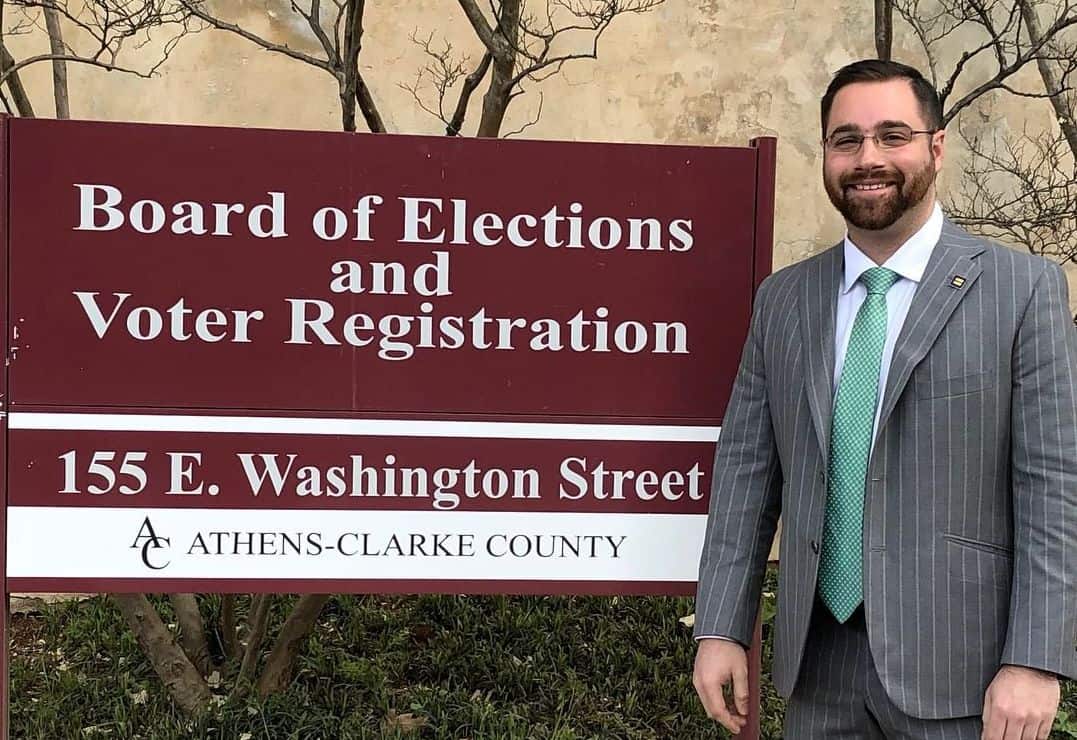 “This was a surreal moment for me. It was incredible to be a part of making history in Athens,” he told Georgia Voice. “Having my partner, friends and grandmother by my side, I completed the formalities and I’m an official candidate for mayor of the fifth-largest city in Georgia.”

Knight is one of three candidates vying to win the May 22 mayoral election. He’s running against Kelly Girtz and Harry Sims, both of whom hold positions on the county commission.

Sims and Girtz, who did not respond to interview requests, have been characterized as conservative and progressive, respectively, with Knight falling in the middle.

“Local government should be inclusive and not allow national political rhetoric to get in the way of making our community a better place,” Knight told Georgia Voice. “I’m an independent and have looked at each issue individually to develop a strategy best-suited for that issue.”

Sims is Clarke County’s longest-serving commissioner, and is also a deacon at East Friendship Baptist Church. Though his website does not list specific platform points, he’s made a few while out-and-about campaigning. According to the independent Flagpole Magazine, Sims made a case for expanding services into the rural areas of Clarke County, saying that “you cannot and should not have a future plotted by those who barely appreciate where [you] live and could hardly find it on a map.”

According to his website, when it comes to supporting any policies, Sims has five criteria he looks at: ensuring the county has adequate funds for it; evaluating possible pros and cons; determining how many citizens will reap its benefits; looking at the wider reach of the policy; and ensuring the policy or decision is part of an overall strategy and not reactionary.

Knight said he spent the past 400 days meeting with major employers, special interest groups, churches and as many voters as he could to hear their input on issues.

“All of those conversations helped me realize even more that [what] we are doing now is not working. Status quo and our current local government structure are failing the people of Athens,” he said. “From day one, I have had my eyes locked on the future of Athens and developing a vision that will create a community where every citizen can thrive.”

Knight originally planned to steer his mayoral platform away from social issues, but recently he began making clear statements about his stances. He told Georgia Voice he supports adopting a parallel ordinance that imposes a maximum $75 fine for possession of up to one ounce of marijuana, and said he would like to see a tax freeze for senior citizens ages 65 and older who face income restrictions. Girtz’s platform also supports a fine option for low-level drug possession.

Other major points on Girtz’s platform include expanding infrastructure and greenspace in downtown Athens to support new and developing business, and finding new ways to make Athens an area attractive to homebuyers, university graduates and larger firms.

As the son of a Cuban immigrant, Knight also has strong beliefs on law enforcement officials working with undocumented immigrants in the community.

“I would never encourage another official to disobey the law or his legal obligation. However, we must only be doing what we are legally bound to do, and should never go out of our way to deport Athenians with minor infractions, those who are stopped for traffic violations and nonviolent offenders,” he said.

“This committee should be tasked with hearing and investigating complaints of discrimination and make recommendations on how to resolve such complaints,” he said. “From racial profiling to religious discrimination, there is no place for hate in the city of Athens. We are open for business. We are not a city open for discrimination.”

“Athens is a city controlled by ‘conservative Democrats,’ although the actual citizens are very progressive,” said Antwon Stephens, an openly gay former mayoral candidate. “I sought to change that by creating a unity platform that addresses issues important to all sides, while promoting progressive, conservative ideas that were both progressive and fiscally responsible.”

Stephens and Knight both made early entrances into the mayoral race, though Stephens did not make qualifying due to health complications.

“Falling ill with complications from cystic fibrosis caused me to withdraw from the race and endorse my opponent, Commissioner Kelly Girtz, who has the nearest views to those I hold,” Stephens said.

His fundraising dollars will partially go toward Girtz’s campaign. Stephens said if Girtz wins, the rest of the money will be donated to political organizations, nonprofits and political candidates with similar views. Should Knight or Sims be the next mayor, Stephens said funds will carry over into the next election cycle.