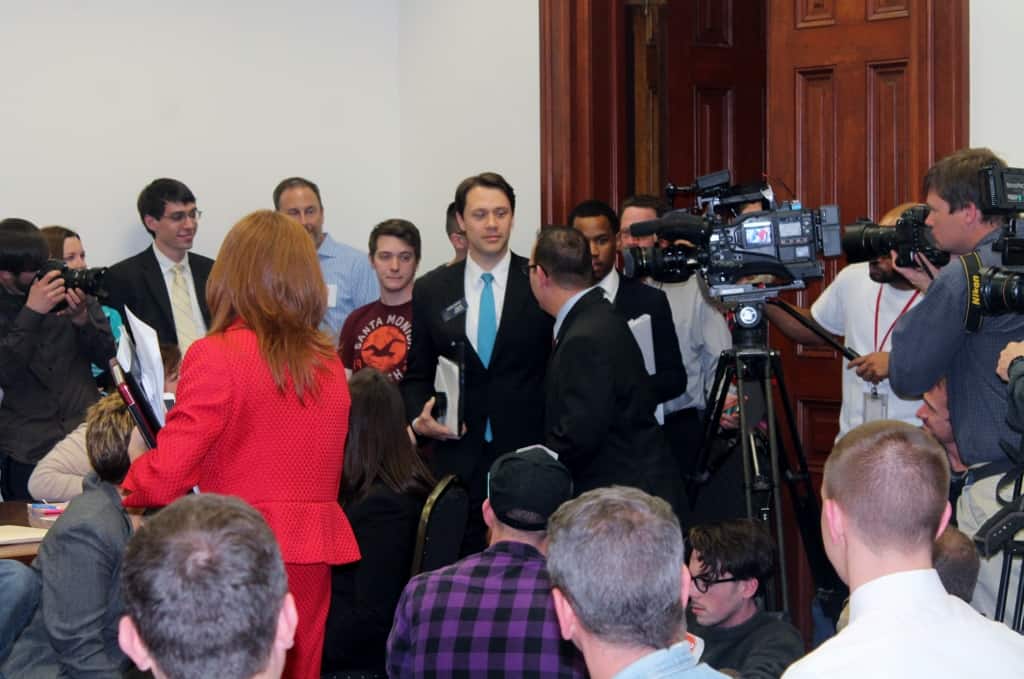 Two controversial bills making their way through the General Assembly that could harm the civil rights of many people including LGBT residents are receiving heavy resistance from local activists who have showed up in force to protest.

House Bill 1023 and Senate Bill 377, both named the “Preservation of Religious Freedom Act,” are making their way through the legislature but what was expected is still unclear.

Georgia Equality Executive Director Jeff Graham told the GA Voice late Tuesday night, “According to various news sources, the House bill does appear dead at this point. However, there are still several days where the committee could meet and move the bill forward.”

The bill’s House sponsors have until midnight on Monday, March 3, to take action and hope it “crosses over” to be voted on by the Senate before the community can breathe a sigh of relief at HB 1023 truly being stalled.

“There is also the matter of Senate Bill 377 that has already passed out of committee and is sitting in the Senate Rules Committee,” Graham continued.

“We must remain vigilant, but Delta’s public opposition to these bills and the quickly changing meeting schedule do indicate that these bills are losing support.”

House Judiciary Committee Chair Wendell Willard (R-Sandy Springs) told WABE on Tuesday he did not think that HB 1023 would survive this session. On Monday evening, a second hearing for the bill was scheduled and then quickly canceled.

Also on Tuesday, Delta Air Lines issued a statement against bills like HB 1023 and a similar bill recently passed in Arizona: “As a global values based company, Delta Air Lines is proud of the diversity of its customers and employees, and is deeply concerned about proposed measures in several states, including Georgia and Arizona, that would allow businesses to refuse service to lesbian, gay, bisexual and transgender individuals. If passed into law, these proposals would cause significant harm to many people and will result in job losses.”

An online petition was also started to urge lawmakers to stop the bills and has nearly 30,000 signatures already.

GAY ACTIVIST: BILLS LIKE A ‘SWORD’ MEANT TO INJURE PEOPLE

Rep. Sam Teasley (R-Marietta) has stated that amendments he made to HB 1023 would make it just like the Religious Freedom Restoration Act passed by President Clinton in 1993.

Anthony Kreis, a PhD student in the School of Public and International Affairs at the University of Georgia, agrees that HB 1023 and the federal law are similar, but says the bigger concern should be SB 377, the Senate bill which already passed through committee and could get a floor vote before Crossover Day.

“That bill is nothing like the bill President Clinton signed in the ’90s,” Kreis told GA Voice. “The Senate bill is a sword which can be used to injure people, versus the federal law which was intended to shield people from objections that if you accommodate people they don’t harm other parties.”

Kreis, also the political co-chair for Atlanta’s HRC Steering Committee, believes the House bill is dead this session but the Senate version still is very much alive and could have treacherous consequences if passed.

“The House bill doesn’t look like it’s going to make progress. The process is bogged down, they got a late start. If either bill has a chance of success it would be the Senate version, which is why I’m so personally concerned — because that’s what I consider the dangerous bill — the one with better chances to succeed. We need to keep an eye on that,” Kreis said.

“The House bill as it stands now and the Senate bill are worlds apart. The biggest difference is the Senate bill threatens to undermine our civil rights tradition, our religious liberty tradition and it raises church and state establishment concerns,” he added.

On Monday, a capacity crowd that spilled out into the Capitol rotunda waited more than three hours for a subcommittee hearing on HB 1023 that could open Georgia’s LGBT residents to more discrimination.

The delay was good news to Rep. Karla Drenner (D-Avondale Estates). “I’m happy that they’re taking a moment to pause on it. I know there’s going to be a substitute bill so I’m not sure at this juncture what’s going to happen with that,” she said Tuesday afternoon.

House Judiciary Chair Rep. Wendell Willard (R-Sandy Springs) told WABE 90.1 FM on Tuesday that it was unlikely the bill would pass out of committee in time by Crossover Day on Monday, March 3.

“Can’t see it happening,” Willard told WABE. “It came in rather late in the session. Too many proponents and opponents.”

Rep. Drenner added she was also concerned with allegations that some LGBT community members were saying disrespectful remarks to the bill’s sponsor, Rep. Sam Teasley, at the subcommittee hearing.

“That doesn’t help our cause at all,” she said. “You can come down and be upset, but after you spew all over someone and leave, that becomes the lasting impression of what gay people are like for that member in the General Assembly. If given the opportunity to come back again, perhaps the behavior might be more professional.”

‘IT’S NOT ABOUT CAKE’

Emotions were high during the long day at the Georgia Capitol as LGBT activists waited for hours for the hearing to start, with many leaving before it began. The delay was due to the full House Judiciary Committee hearing that ran long, pushing the 3 p.m. scheduled time back to past 5 p.m. Then an unrelated bill was heard first.

Politicians, community leaders, religious leaders, business owners and private citizens flooded the room throughout the night. State Senator and gubernatorial candidate Jason Carter stopped in for a quick greeting to the crowd but did not make any remarks on the bill.

Georgia Equality’s Graham later told the GA Voice that he hadn’t seen the community come out like this on an issue since 2004.

“If we could get this many people out to support pro-LGBT legislation like Rep. Karla Drenner’s Fair Employment Practices Act or Rep. Keisha Waites anti-bullying bill [HB 816] we would likely see movement on them,” he said.

State Rep. Simone Bell (D-Atlanta), who is gay, came in for a portion of the meeting and made emotional remarks to committee members.

Graham also told committee members he values religious freedom, but religion is often the cause of of preventing equality for LGBT people.

“Please understand that as someone with a background in theology and religious studies, I value religious freedom and applaud efforts to ensure that diverse views are always heard and respected,” Graham said.

“However, as a gay man, I can assure you that the vast majority of derogatory comments I have heard and the primary arguments used to prevent my community from achieving legal equality are rooted in what people profess to be their religious beliefs or their personal interpretation of a few selected biblical passages.”

‘DANGEROUS AND IMMEASURABLE IN SCOPE’

The state Democratic Party is calling the bills “dangerous and immeasurable in scope.”

“Among many other things, [the bills would] open a Pandora’s box of LGBT discrimination and unfairly target women based on their health care decisions,” stated a press release from the Democratic Party of Georgia.

“What makes this even more alarming is the fact that Republicans are using a tactic they seem to be quite fond of lately by scheduling the hearings in tandem to sidestep opposition testimony,” said Michael Smith, spokesperson for the Democratic Party of Georgia.

“The pathetic part of this is that Republicans could have spent their time crafting legislation that put people back to work or armed Georgia’s future workforce with a first-class education,” Smith added. “Instead, the Georgia GOP has connived ways to manufacture right-wing primary fodder for the far fringe of their base that stealthily silences the voice of any mainstream voter who will find this legislation objectionable.”

According to the state Democratic Party, the proposed bills would:

• Allow individuals and private organizations to claim an imposition on their religious freedoms to make decisions otherwise protected by current law. For instance, both of these bills would allow employers to discriminate against potential employees based on current protected legal statuses — like race, sex, age, pregnancy, nationality and even religion under the guise of protecting the employer’s religious freedom.

• Also: “While Republicans state that the bills are designed to protect religious freedoms that are already guaranteed under the U.S. Constitution, the legislation is tailored in a way to limit some of our most basic protections — including access to birth control for women and protection from state-sanctioned discrimination against LGBT individuals.”

-An employer to fire a woman who remarried after a divorce or who is pregnant and not married.
-A person whose religion demands pacifism and non-violence to refuse to rent an apartment to a tenant who owns a gun.
-The owner of a sandwich shop to refuse to serve a gay customer.
-A healthcare worker to refuse a woman a prescribed medication.
-A counselor be exempted from state required licensing requirements.

“The bill applies not just to individuals but also to for-profit and secular corporations and organizations. These businesses entered the stream of commerce for monetary gain and thus should not be allowed to reap the benefits of the marketplace but not have to play by the same rules as everyone else,” Georgia Equality stated.