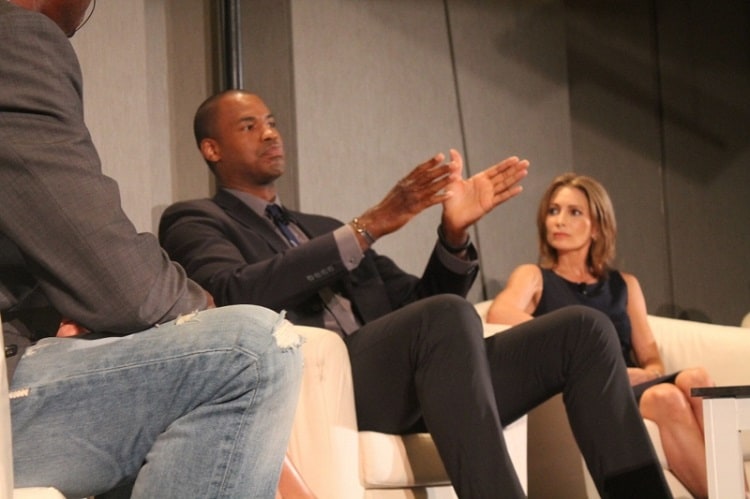 Jason Collins, the NBA’s first openly gay player, took part in a CNN Dialogues event at the Center for Civil and Human Rights in downtown Atlanta on August 21. The topic was “Athletes and Social Responsibility: Expectations in the 21st Century,” focusing on the roles and expectations of athletes, coaches, and owners in philanthropy and bridging racial and cultural divides.

While LGBT issues were not front and center, Collins was able to give his unique perspective on a variety of issues, especially when it came to athletes serving as role models, citing lesbian tennis legend Martina Navratilova “who always spoke her mind and wasn’t afraid of the public backlash.”

Collins also referenced Navratilova in an interview with the GA Voice the morning of the event.

Collins looks at his role as a public figure as both a responsibility and an opportunity to set a good example for kids.

“When you have an opportunity to have a positive affect on someone else’s life, then why not take it?” he told an engaged audience. “Why not be that light for them?”

However, he acknowledged that athletes are human and make mistakes like anyone else, but that they can use those mistakes as teachable moments.

“Talk to kids about that and say, ‘Yes I did this wrong and I learned from it and so can you,’” he said.

Moderator Greg Anthony brought up the Michael Brown shooting and ensuing turmoil in Ferguson, Missouri, which led into a discussion about athletes’ speaking up on social issues.

“You have a huge platform and if something that speaks to you, that speaks to your soul, then why not take advantage of that opportunity to bring awareness and unity and get people talking about it more,” Collins said. “The more conversations that are had, the more people can really express their opinions and work through the issues in society that divide us.”

Proceeds from the event benefited the Center for Civil and Human Rights and Emory University’s James Weldon Johnson Institute for the Study of Race and Difference. Another CNN Dialogues event will be held later this year, with details yet to be announced.