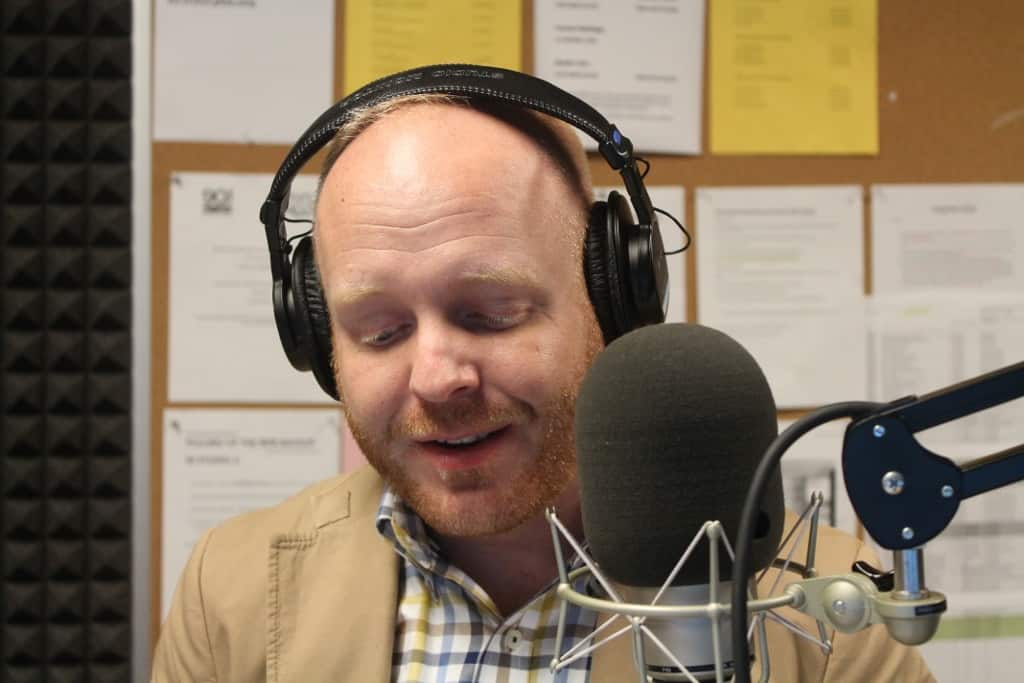 One day in late March, WABE reporter Jim Burress toured a Liberian hospital where the first three people in Guinea diagnosed with Ebola had come for treatment. The next day, he found himself back in the same hospital—but this time in a bed, showing signs of the deadly disease that’s gripped the world’s attention.

“They diagnosed it as malaria but it wasn’t, it was something I ate I think,” Burress says. “So yeah, that was the scary part.”

The openly gay reporter and local host of the station’s “Weekend Edition” got home safe, healthy and armed with another story to add to an award-winning career.

The opportunity to cover such hard-hitting stories in depth wasn’t always present at WABE, Atlanta’s NPR affiliate, but circumstances have changed over the years—and they’re about to drastically change over the next several months for Burress, the WABE staff and the Atlanta radio community.

The WABE newsroom is a long way from Wabash College in tiny Crawfordsville, Indiana, where Burress worked at a student radio station while getting his bachelor’s degree. After graduation he went to work for a television station in Terre Haute, where he eventually came to a realization.

“Eventually I decided TV was just awful. I still think that,” he says. “It’s fun but it is an awful industry. Everybody seems to be in it for the complete wrong reasons. From the top end, it’s so business driven. So it’s all about making money.”

He got out of the TV business and went to grad school at Murray State University in Kentucky, where he started his public radio career at NPR affiliate WKMS. He found his way to Atlanta after that by moving here to work on his PhD, but after a year away from reporting, he was itching to get back in.

“The final week of class I knew I was not going back, but I had no idea what I was going to do,” he says. “I’d actually applied [at WABE] when I still worked in Kentucky two years prior. Magically I get a phone call out of the blue. ‘We have your resume here. We need somebody. Are you still looking?’ It was like manna from heaven. I started work that very next week. That was 2008.”

‘I’VE FALLEN IN LOVE WITH ATLANTA’

Things were much different at WABE back then, and Burress didn’t see himself sticking around long.

“My plan was to be here for two years to get the credentials to go to KQED in San Francisco. I saw this as a stepping stone,” he says. “There were four of us in the newsroom when I came and every day was awful. We had to get the same amount of news on with just four people doing it. I started to burn out.”

But he hung in there and after a couple of years, more funding came through, the station started to hire more people and WABE’s name recognition within Atlanta’s reporter community grew. They’ve since tripled the size of their newsroom staff.

“I got to do a lot of the reporting I like to do. We kind of became a family,” Burress says. “Now I’m at the point where I don’t want to leave. I’ve fallen in love with Atlanta.”

WABE got another shot in the arm with the Nov. 6 announcement of a four-years-in-the-making plan to cut back classical music during the day, expand its local news, talk and arts coverage and nearly double the size of the news staff.

Burress considers the growth a necessity, thanks to the demands of the Atlanta radio audience.

“They expect a city of this size to have a station of a higher caliber,” he says. “So we’ve asked them to put their money where their mouths are and they did. During our pledge drives, we’ve really seen a lot of success. So the station is investing in the newsroom because that seems to be driving most of the interest.”

The Life of a WABE Story

Early August
Jim Burress was walking from a downtown parking garage to an appointment when he noticed one of the city’s red panhandling prevention “giving meters” and got to thinking about how the program was going since it was introduced several years ago.

Throughout August
Burress files an open records request with the city to find out where the money was going and who is responsible for keeping track of it. This takes the city several weeks to process before the request comes through. The verdict: the money is sitting in a city bank account and hasn’t gone anywhere.

September through early October
Burress talks to city officials who tell him Central Atlanta Progress was behind the marketing. But they claim they just handled that at the beginning of the program. Burress talks to a manager of a business in the area that was one of the first to place the meters downtown. She tells Burress she was told the money was supposed to go to a local homelessness non-profit. It hadn’t.

Central Atlanta Progress tells Burress it doesn’t matter if the meters are defective because the panhandling problem is much better than it used to be and that police figures can back that up. Burress talks to officials at the Atlanta Police Department, who admit the meters haven’t solved the problem.

City officials tell Burress it’s up to the Atlanta City Council to divvy up the funds. Burress calls City Council President Ceasar Mitchell, who was unaware of this responsibility. Mitchell tells Burress that now the council knows the money’s just sitting there in a city bank account, the council will look into how to put it to its initial use. Burress has all the sources he needs for the story and is ready to write.

Mid-October through early November
Burress writes and rewrites the story up for radio into a five-minute segment.

Nov. 6
Burress reads the story for WABE news director John Haas for the first time, and the edits begin. Burress and Haas spend an hour fine-tuning the story.

With a finished script in hand, Burress heads to the studio to record his voice track, then back to his computer to take the best cuts and piece all the audio clips together. This takes about an hour-and-a-half. After the audio is done, Burress writes the story up for the web, which takes another hour.

Nov. 10
The story airs with a final running time of just over four minutes. Listen to the finished WABE story “Money from Meters to Help Homeless Sits Unspent” by Jim Burress here.