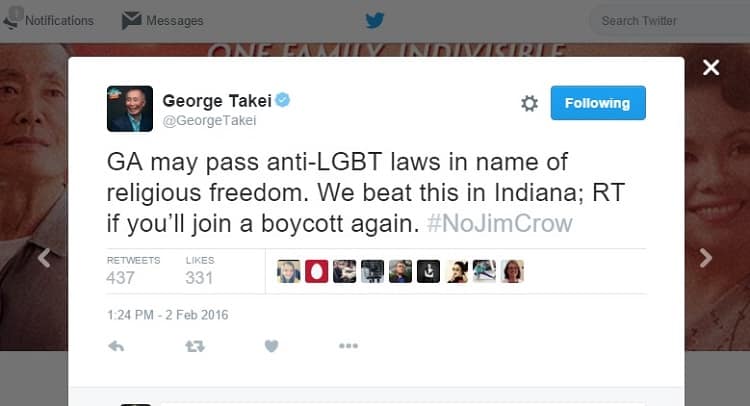 George Takei has no time for Georgia’s ‘religious freedom’ bills

Out actor and pop culture darling George Takei took to social media Tuesday afternoon to voice his opposition to the six so-called “religious freedom” bills currently under consideration in the Georgia legislature, ending each post with a hashtag in reference to Jim Crow laws.

GA may pass anti-LGBT laws in name of religious freedom. We beat this in Indiana; RT if you’ll join a boycott again. #NoJimCrow

Then with no 140 character limit, he was able to expand on his thoughts on Facebook:

In Georgia, there are no statewide laws prohibiting LGBT discrimination. Now GA lawmakers, like those in Indiana last…

And Takei wasn’t the only national figure to voice their opposition to the bills. Soon after, Jason Collins, the first openly gay player in NBA history, jumped into the discussion. He even gave a plug to Georgia Unites Against Discrimination, the LGBT rights coalition formed to fight such bills.

The entry of the topic into the national pop culture and sports conversation comes just days before a pair of back-to-back rallies taking place at the Georgia State Capitol. The state’s LGBT community and allies converge at Liberty Plaza for a rally against a slew of so-called “religious freedom” bills on Tuesday, Feb. 9, followed the very next day by a “prayer rally” in the same location headlined by evangelical preacher Franklin Graham that is expected to draw multiple GOP presidential candidates.

And Takei’s and Collins’ posts came on the same day as both supporters and opponents of the bills gave back-to-back press conferences inside the Capitol.