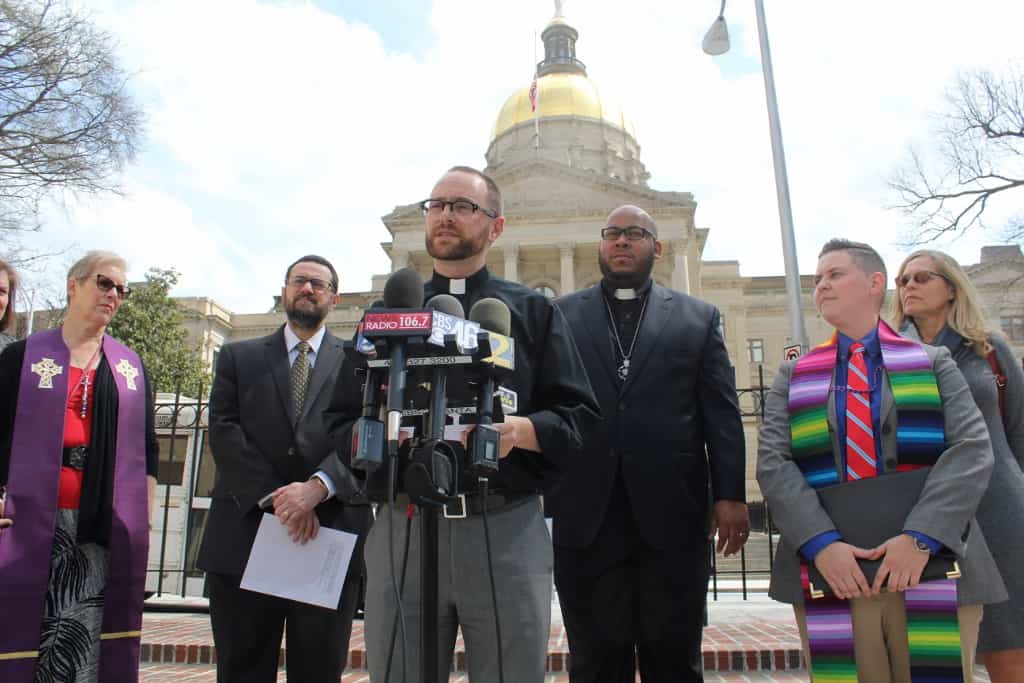 Gov. Nathan Deal drew a flood of attention last week when he came out against disciminatory legislation like House Bill 757, the anti-LGBT bill roiling the state. The attention wasn't just due to what Deal said but how he said it—by making a biblical argument against such legislation. On Tuesday, a prominent group of Georgia clergy gathered to praise Deal and add to the growing opposition to the bill as the session nears its end on March 24.

"The word of God in all of our faiths must bring people together, not drive them apart," said Rev. William Flippin, Jr. of Emanuel Lutheran Church. "His words were inspiring and should make all public leaders consider what we are called to do."

Rabbi Joshua Heller of Congregation B'nai Torah called the bill a "disaster" in its current form, saying, "It makes our faith into a bludgeon to beat up other people."

"You may agree, you may disagree with our governor on any number of things, but I think he's spot on the money. And the people of our state and especially the people of faith in our state owe him a debt of gratitude," he continued. "We live in a time and we live in a place where if you reach your hand across the aisle, it might get slapped. And he was not afraid to reach out to people and to express honest, faithful feelings, true feelings from his faith, even if it meant being a little unpopular with some people who might have voted for him the last time around."

Several of the faith leaders also called for comprehensive civil rights legislation as they spoke in the courtyard of Central Presbyterian Church, with the state capitol as a backdrop. But overall the theme of the event, which included Pastor in Residence Molly McGinnis of Central Presbyterian Church and  Rev. Susan Taylor of Starrsville United Methodist Church, was gratitude for Deal's words and opposition to HB 757.

"I've never felt threatened as a leader in the Christian tradition that my beliefs were in jeopardy," said Rev. Josh Noblitt of Saint Mark United Methodist Church, and citing the First Amendment of the U.S. Constitution he added, "We already have these powerful laws in place to protect our religious liberties. We don't need additional provisions that would allow others to discriminate." Noblitt, a candidate for the House District 59 seat, qualified for the election on Monday and will face Janine Brown and David Dreyer in the May 24 primary.

Praise for Deal has been flooding in from faith leaders around the state and the country since last week's comments, with Rev. Dr. David Gushee, an evangelical Mercer University professor, writing Monday that, "Jesus showed up in Georgia, his words and his spirit reflected for a moment by the words of our governor.Jesus is dangerous that way. He can show up in the most untimely ways, throwing up roadblocks in front of those who claim his name but do not reflect his spirit."

And James Rowe, director of LGBT-affirming Christian group Believe Out Loud, wrote an editorial in The Advocate on Tuesday, saying, "Gov. Deal and I may not agree on many things (like the definition of marriage, for example), but we do agree on one important point — discrimination is not a Christian value. It's time for more Christian lawmakers like Deal to rise up and speak out against legislation in any state that seeks to legalize discrimination based on religious beliefs."

As for the status of HB 757, the eyes of the state remain on the House as they decide what to do next.