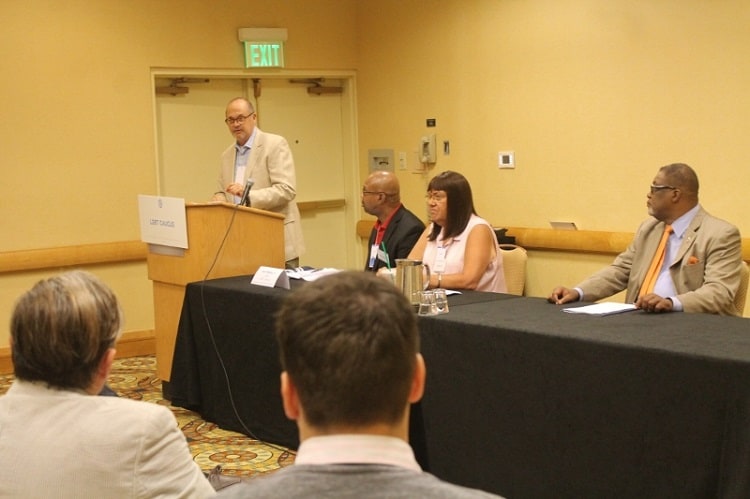 Chair of the DNC’s LGBT Caucus, Earl Fowlkes, a gay Democratic activist and Black LGBT Pride leader out of Washington, D.C., presided over the meeting, which included updates on the LGBT caucus’ various efforts throughout the country as the party approaches a crucial November election date. There was no mention by any of the speakers on the LGBT stances of any candidates, whether local or national.

Jason Rae from Wisconsin’s LGBT caucus talked about the transgender inclusion efforts going on in his state, noting that their state party’s governing documents previously said that officers were to be a man or woman and someone from the opposite gender.

“We went through a process where our entire state convention voted unanimously to amend our state party governing documents to change the word ‘opposite gender’ to ‘different gender’ to recognize the fact that there are more than just two genders out there,” Ray announced to applause from the gathered members.

“When I was Hall County chair, it took awhile for the party locals up there to understand that I had a husband, and that he was just as good as any other husband or wife or spouse,” Taflinger said. “Part of it I found was the awkwardness of not knowing how to address it because they’d not been around it before. That is what we’re working on within the party.”

The Georgia Democratic LGBT caucus has also started a partnership with the Stonewall caucus of the Young Democrats to work on voter outreach in that segment.

“Us old people who have been in the caucus for awhile don’t know how to relate to the 20 and 30-year-olds,” he said.

“We have great candidates. Georgia is changing and we have a chance. That is our focus now is to identify those voters, make them active, make them aware and get them to the polls,” he said.

The state LGBT caucus also has an eye on the future when LGBT equality issues are settled and young LGBT Democrats start getting a wandering eye in the direction of another party. Taflinger says they will continue to work with the Young Democrats to make them lifelong party members.