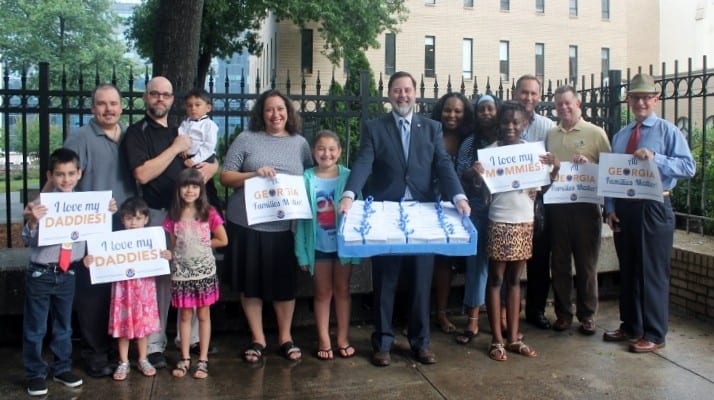 Georgia Equality and supporter delivered more than 3,000 petitions to Attorney General Sam Olens in July urging him to drop the defense of the state's same-sex marriage ban. (Photo by Patrick Saunders)

Georgia Equality and supporters, including clergy members, will join together on Thursday at 5 p.m. on the steps of Atlanta City Hall in a public rally to urge Attorney General Sam Olens to stop defending the state’s same-sex marriage ban.

“It’s clearer now than ever that efforts to uphold and defend obviously discriminatory and exclusionary bans on marriage for same-sex couples will surely fail,” said Jeff Graham, Georgia Equality executive director, in a prepared statement.

“More than 40 times since last summer’s historic Windsor decision, marriage bans have been struck down as unconstitutional, and same-sex couples now have the freedom to marry in a record 32 states,” he added. “Georgia’s ban is sure to meet the same fate. We urge Attorney General Olens to stop wasting taxpayer dollars on a case destined for failure, and join us on the right side of history. It’s time for marriage for all Georgia families.”

Lambda Legal filed a federal lawsuit in April on behalf of several plaintiffs challenging the state’s ban on same-sex marriage. Olens stated in a motion to dismiss the lawsuit that the state’s ban is constitutional and he would continue to defend it as part of his job.

Democratic candidate Greg Hecht, who is opposing Olens in the Nov. 4 election, has promised to drop the defense of the state’s marriage ban if elected.

In July, Georgia Equality began petitioning Olens to stop defending the ban and delivered more than 3,000 petitions to Olens’ office later that month.