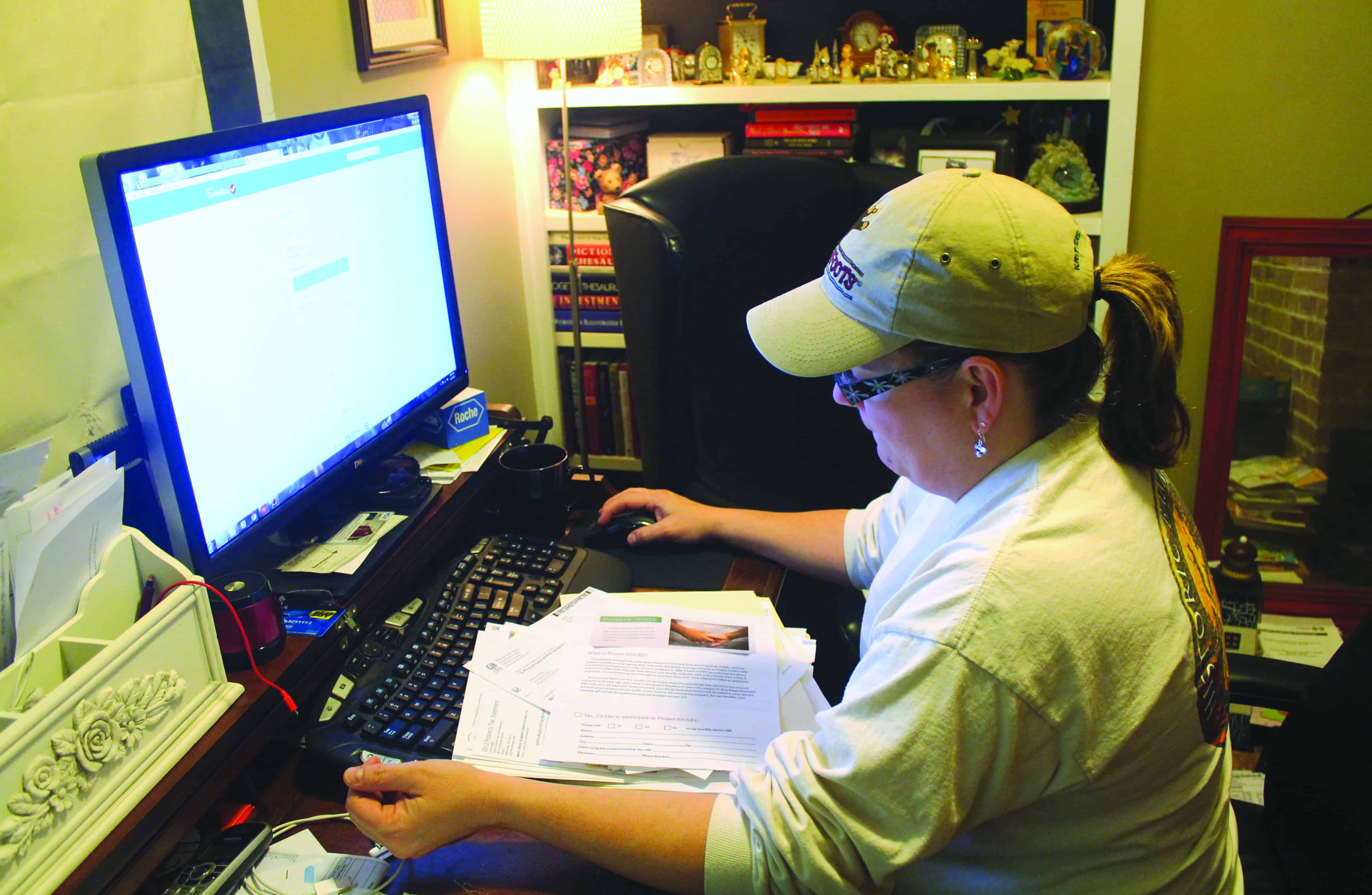 Stacey L'Hoste married her wife in Provincetown in 2011, but this is the first year they're filing as married filing jointly. (Photo by Patrick Saunders)

The historic striking down of a major portion of the Defense of Marriage Act by the U.S. Supreme Court last June led to elation for the LGBT community and allies across the country. But as 2013 turned into 2014, a new set of complicated tax situations and vital financial questions arose for LGBT couples as the chalk outline of DOMA faded.

Pasqualetti has nearly 30 years of experience as a tax advisor with a deep knowledge of the financial situations of LGBT couples. She is also in a longterm lesbian relationship.

She and her partner and countless other couples are in the midst of this whole new ballgame as April 15 approaches and financial decisions that could have a lifelong impact begin to surface.

‘LIVING IN LIMBO’
Nathan Miller, 36, and Allen Hedrick, 47, have been together for four years and decided they would only get married if it became legal in Georgia, or whichever state they live in in the future.

Miller says that if you’re married in another state but not your home state, “you’re kind of half-married, in limbo.”

However, that doesn’t mean the extinction of DOMA didn’t have an effect on their financial situation.

“Prior to DOMA being struck down, that was the justification that my company used for not providing insurance to employees’ spouses,” Miller says.

Married LGBT couples do still have the option to file separately, but that comes with many penalties. For example, married lower income people who file separate will lose the earned income credit. That’s one on a laundry list of benefits a taxpayer could lose if they as married filing separately: tuition and fees deduction, student loan interest, education savings bond interest exclusion, Lifetime Learning Credit, American Opportunity Credit and others.

But what if you’re married and decide to file a married filing joint return in Georgia? Take a deep breath.

‘I’VE BEEN WAITING FOR THIS MY ENTIRE LIFE’
Same-sex couples who marry legally in another state, but reside in a state like Georgia where same-sex-marriage is illegal, face an unprecedented set of circumstances.

If a married same-sex couple (“married” being defined as having been married in one of the states where same-sex-marriage is legal), file their taxes jointly, they need to know that they are each taking on everything in that return equally and solely.

Married couples filing jointly would also be co-mingling their assets — so if your partner has any debts or credit issues, you take those on jointly.

If you’re legally married, your marriage is recognized on a federal level — but not in the state of Georgia’s eyes, thanks to the 2004 same-sex-marriage ban.

So if you decide to file jointly, you must each prepare (but not file) federal returns as single to get your adjusted gross income for your state returns. Then you can merge those two federal single returns into one federal married filing jointly return.

Stacey L’Hoste, 44, and her wife of 16 years got a civil union in Hawaii in 1999 and were legally married in Provincetown in 2011. Since DOMA was struck down, this is the first year they will be filing married filing jointly.

Before, they each filed as single and were able to do their taxes online with Turbo Tax. But in order to file all the necessary federal and state returns, they purchased the full Turbo Tax software.

There are a variety of other factors that go into the decision of whether to file jointly or separately, including income level, number of dependents if any, if either partner has education expenses. It’s something that a tax professional would need to evaluate before rendering advice.

“The tax burden is going to kill them,” Pasqualetti says.

It’s a quandary that is leaving same-sex couples to ponder a most decidedly unromantic question: how much money are you willing to shell out just to say you’re married?

Pasqualetti realizes that some clients consider it priceless.

“I had a doctor come in the other day that said, ‘I don’t care how much it costs me, I’ve been waiting for this for my entire life. It’s worth it to me.’ A lot of it is an emotional decision for people,” she says.

L’Hoste and her wife ended up paying out a lot more when they filed jointly.

“However, having the right and to be recognized as a married couple is worth it,” she says. “So it’s good and it’s bad. For the first time in my life I’m filing as married, but it stinks because we’re paying more taxes.”

Pasqualetti acknowledges that the idea of getting married is exciting and that there are financial benefits to getting married. For example, if you have a child and one of the two in the couple passes away, the child will get survivor benefits as well as the spouse’s benefits in Social Security.

If you’re married for 10 years or longer and you divorce, there is the option of drawing Social Security on that spouse’s income instead of your own. If you have a government pension plan, it can only go to your spouse upon your death — if you weren’t married, it would go back into the company’s coffers.

But she is advising her clients not to rush into it. “Let’s consult first. Do the math, then base your decision on what you know, not what you don’t know,” she says.

‘HOW DO WE VIEW MONEY?’
Allen Shpigel was surprised that same-sex couples haven’t rushed into getting married quicker since a major portion of DOMA was struck down.

“What people are doing now is more financial planning, asset restructuring, estate planning, but they’re not formalizing their relationship,” says the financial advisor with Ameriprise Financial Services. “It’s almost like they don’t want to do the legal part.”

Shpigel cites the case of two of his male clients who have been together for 47 years but are not getting married just yet.

“For several reasons: their asset level does not require substantial restructuring based on their legal status, so they’ll just try to handle it in other ways,” he says.

“With older couples in their late 60′s or early 70′s, some are just set in their ways,” he says. “As long as it doesn’t have a huge impact on their overall tax and estate plan, they don’t want to rock the boat.”

Shpigel advises going over your specific situation with a financial planner and reviewing the pros and cons of formalizing and legalizing the relationship in the process.

A “huge” pro in Shpigel’s eyes is the estate tax exemption, which was used to spur United States v. Windsor, the case that ultimately led to the Supreme Court knocking out Section 3 of DOMA.

“You don’t have to worry about one spouse’s estate being taxed to the other partner if you’re married,” he says. “That’s what pushed things over the edge to make changes.”

There are also marriage benefits relating to charitable donations, social security benefits, pension benefits, retirement account benefits and more.
The key is to sit down and talk about your finances, Shpigel says.

‘THEY’RE MISSING OUT’
In a sea of so many scenarios and situations, one thing is certain — the landscape has changed since DOMA was struck down. But same-sex couples will have to wait for Georgia to catch up with history and legalize our relationships for the confusion to clear up.

“We’re in limbo and we just have to wait for it to shake out,” Pasqualetti says. “All I can say is, Edie Windsor really is my hero. For someone of that age bracket to take that on is just amazing.”

“I think that having someone there as a third party makes those conversations a lot easier,” he says. “I’m a banker and could do all of that stuff, but having someone there to facilitate those discussions is helpful. It’s kind of like having your personal trainer. They are there to watch and check up on us — we might get off the rails if we didn’t have that.”

And as a result of this whole new way of doing things for her and her wife, L’Hoste has realized something else.

“The state of Georgia is missing out on tax return revenue, because look how many more people would pay more taxes if they acknowledged same-sex-marriage in Georgia? They’re missing out,” she says.