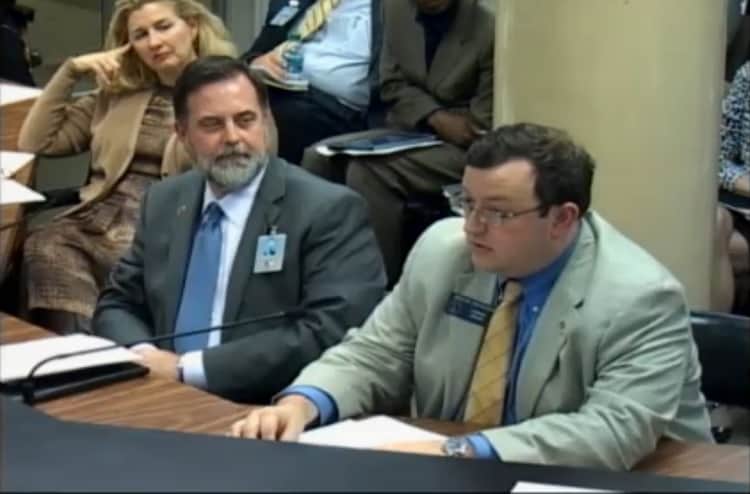 Last minute dramatics capped off a two-hour long meeting of the House Judiciary Committee on Thursday, as an amendment adding protections against discrimination passed, which led to a successful vote to table the bill. If the bill would have passed in today's hearing, it likely would have reached the House floor for a vote as soon as Friday. Now the bill's future is in serious jeopardy as the days left in this year's legislative session dwindle.

The amendment was proposed by Rep. Mike Jacobs (R-Brookhaven), who stated that he was inundated with calls and emails from constituents concerned about the bill's effects. After several minutes of debate and a call to vote on the amendment, Rep. Barry Fleming (R-Harlem) gave a stern warning to the committee that if the amendment passed and anti-discrimination language was included in the final version of the bill, he would vote no on it.

"This is the amendment that will gut this bill," he said emphatically. The committee then voted 9 to 8 to pass the amendment. Joining Jacobs and the six Democrats who voted in favor of the amendment were Rep. Jay Powell (R-Camilla) and Rep. Beth Beskin (R-Atlanta). Beskin's vote is notable in that she voted against a similar amendment in Wednesday night's hearing, only to vote in favor a day later.

Following passage of Jacobs' amendment, Fleming made a motion to table it, got a second and the bill was tabled. Jacobs, who switched to the Republican Party in 2007, was honored by Georgia Equality in 2007 for his work passing anti-bullying legislatoin and supporting other LGBT issues.

The bill passed out of a special subcommittee in a hearing that began Tuesday and reconvened Wednesday evening.

'The truth of the matter is this is Georgia'

McKoon stuck to a common refrain among proponents of the bill throughout Thursday's hearing, asking opponents to cite a case of a state RFRA leading to discrimination and referencing Mike Bowers' involvement in the fight against his bill.

“You had a former attorney general of this state who was hired by opponents of the bill who was asked to cite a single case and he failed to do so,” McKoon said.

Mike Griffin of the Georgia Baptist Convention brought the point up again during his testimony but was challenged by Rep. Roger Bruce (D-Atlanta).

“You keep making reference to these other states and the truth of the matter is this is Georgia,” Rep. Bruce said, citing a less tolerant history in the state concerning minorities. He then questioned why proponents aren't allowing protections against discrimination in the bill.

“Right now what you are asking us to do is allow state-sponsored discrimination, and if this is not what you are doing, then let us put in the bill to make sure there's no question about that,” he said.

Georgia Equality executive director Jeff Graham also countered the proponents' argument about citing other cases of discrimination in state's that have RFRA by stating that in those 20 states that currently have a RFRA, all of them but one have a statewide civil rights statute. There are no such protections in Georgia.

Graham got into a tense exchange with Rep. Tom Weldon (R-Ringgold) when Weldon mentioned that adding language into the bill preventing discrimination could infringe on peoples' religious liberties. Graham asked Weldon if he had an example of how serving or employing someone from the LGBT community would infringe on someone's religious liberty.

“I'm the one asking the questions,” Weldon said.

Ron Fennel and Jim Sprouse of the Georgia Hotel and Lodging Association spoke out against the bill in its current form. Fennel, a former Democratic state House representative and current Smyrna City Councilmember, mentioned that they've received calls from customers all over the country expressing concern over the bill.

Sprouse followed up, saying, “As an industry we're concerned about the perception of an unwelcoming state. Please don't discount the importance of that perception. There are 411,000 Georgians making their living in hospitality. Millions and millions of dollars in terms of events going on in this state. The controversy around this bill makes it clear to me that this bill should not pass.”

Rep. Mary Margaret Oliver (D-Decatur) then asked, “Perception is reality in salesmanship, is that right sir?” Sprouse replied in the affirmative.

Perception versus reality was a frequent topic throughout the hearing, as noted by Oliver's comments to Griffin regarding the timing of the introduction of state RFRA across the nation.

“The reality is that what has changed since 1993 is there's been a dramatic shift in the law and the rights and in my church and other churches—the rights of gay Americans,” she said. “And the energy around RFRA looks like it relates to a very fast-growing change in the law that simply wasn't true in 1993. In the last two years there has been an emergence of enhanced discussion about religious liberty that directly relates to the enhanced freedoms of the gay community.”

The bill has become one of the most talked about pieces of legislation of this year's session, along with transportation, education and medical marijuana bills. LGBT and progressive rights groups have attacked the bill for opening up the door to more LGBT discrimination, with numerous legal scholars and faith leaders joining them in that opposition.

Ears perked up throughout the Capitol after a group of Georgia convention bureaus sent a letter to members of the judiciary committee late Wednesday saying that $15 million of convention business will be lost if the bill passes.