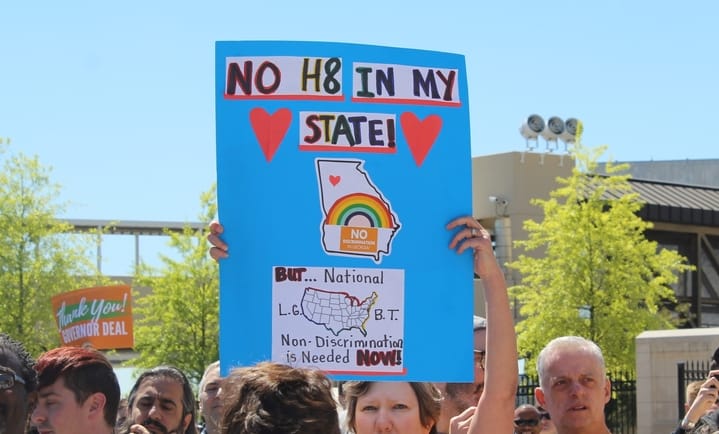 Updated at 6:30 p.m. with comments from Sen. Vincent Fort

In a surprise move late this afternoon, the state Senate Judiciary Committee added anti-LGBT language to House Bill 159, a piece of legislation dealing with adoption.

“In a shameful act of political maneuvering, members of the Senate Judiciary Committee just tainted a good adoption bill by adding a blatantly discriminatory amendment that seeks to allow adoption agencies — even ones that receive public funding — to discriminate against same-sex couples and refuse to work with prospective LGBT parents,” Jeff Graham said in a statement from the organization Georgia Unites.

Graham urged concerned constituents to call the Governor’s office about the proposed amendments to HB 159. The new amendment language, introduced by Sen. William Ligon (R-Brunswick), was not immediately available.

“HB 159 as amended is despicable on so many levels,” Graham said in the statement. “Taxpayer dollars should never, under any circumstances, be used to fund discrimination. Limiting the pool of prospective parents for children in dire need of forever families puts orphans and foster youth in harm’s way. Same-sex couples and LGBT people are just as qualified as anyone else to parent and provide loving homes for children in need.”

Sen. Vincent Fort (D-Atlanta) told Georgia Voice the rest of the committee found out about the proposed language shortly before the meeting, and said it was not expected at all. He said the Division of Family and Children Services reported that should such legislation pass, “the state would be subject to losing hundreds of millions of dollars of federal money.”

The Senate Judiciary Committee is chaired by Senate Majority Leader Bill Cowsert. Senators Josh McKoon (R-Columbus) and Greg Kirk (R-Americus) are both on this committee, and are both known for introducing so-called “religious freedom” bills in the past. Both Speaker David Ralston and Lt. Gov. Casey Cagle said at the beginning of this legislative session that this type of legislation was not on the agenda of the General Assembly for 2017, and an earlier attempt this session to introduce a “religious freedom” bill got stuck in committee and did not make it to crossover day.

HB 159 was authored by Rep. Bert Reeves (R-Marietta) and co-sponsored by Rep. Stacey Evans (D-Smyrna), who earlier this year introduced companion legislation to the Senate’s “Georgia Civil Rights Act,” SB 119. The original intentions of HB 159 were to “substantially revise” general provisions relating to adoption — including the age at which Georgians may adopt a child, add maternity leave provisions for adoptive individuals and to allow nonresidents to adopt their children.

“The amendment to HB 159 doesn’t just seek to cast LGBT Georgians as second-class citizens. It does so at the expense of some of the most vulnerable people in our communities: young people with no family to call their own,” Graham said in the statement.

During the meeting, Fort made a motion to strike sections four and five of the bill.

“Section four said that an agency could refuse a referral based on its ‘mission,’ and I said that that was a license to discriminate,” he said. “I made a motion to eliminate the bad parts of the bill. The motion failed and the bill passed.”