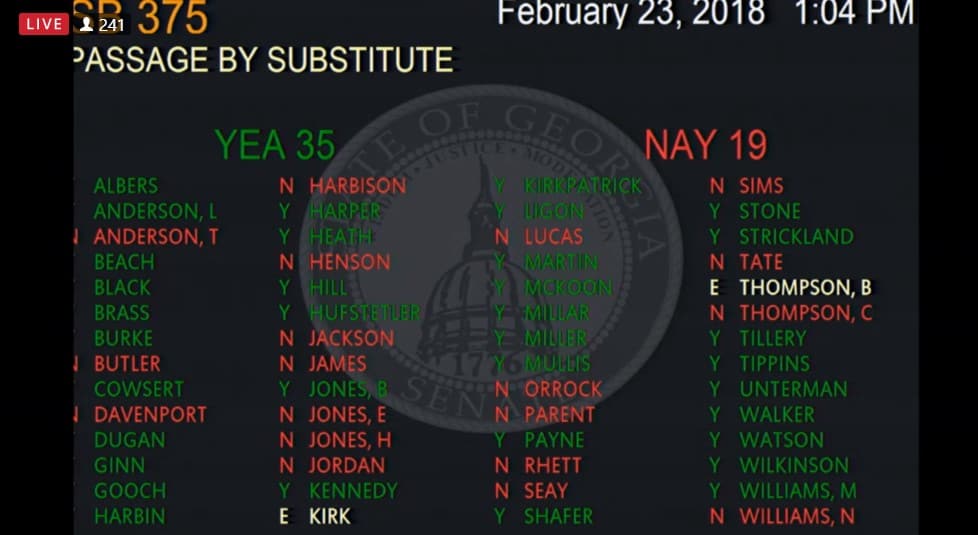 The Georgia Senate on Friday morning passed a bill that would allow adoption agencies to refuse to place children with same-sex couples based on their religious beliefs. The bill would also prohibit the Georgia Department of Human Services from taking “adverse action” against such agencies. The bill passed along party lines 35-19 and will now head to the House for consideration.

Senate Bill 375, called the “Keep Faith in Adoption and Foster Care Act,” was introduced earlier this month by state Sen. William Ligon (R-Brunswick), who added similar language to an adoption overhaul at the end of last year’s legislative session, causing the bill to stall. A Senate Judiciary sub-committee met on Feb. 8 to take up the bill, moving to send it on to the full committee, which passed the bill on Feb. 20.

Senators debated the bill for over an hour, and the 2015 Supreme Court decision on same-sex marriage was a hot topic throughout, with several senators who support the bill quoting directly from the ruling.

Sen. Ligon and other supporters of the bill continued to try and make the case that passage of the bill would lead to more adoption opportunities in the state and not less.

“This bill does not prevent anyone from adopting,” Ligon said emphatically at one point.

Sen. Ligon and Sen. Jen Jordan (D-Atlanta), who beat an anti-LGBTQ Democratic opponent to win her state Senate seat in December, got into a lively discussion on the merits of the bill. Jordan questioned the need for the bill, confirming with Ligon that there are is no record of adoption agencies being discriminated against in Georgia because of their faith. Jordan then repeated a point brought up by State Sen. Elena Parent (D-Atlanta) during Tuesday morning’s Senate Judiciary Committee hearing — that the concern these agencies have is based on a feeling rather than facts.

“It’s not based on feeling,” Ligon responded. “They want to have the assurance that they’ll be able to exercise their fundamental right to practice their faith.”

State Sen. Fran Millar (R-Atlanta) spoke in favor of the bill, saying that it would broaden opportunities for children in foster care.

“I’m tired of watching [the state] fail in certain areas and we have failed foster children,” Millar said. “The statistics [Ligon] read are true. If this broadens the opportunities for people to love them and raise them, then by God I’m going to vote for it.”

“The aspersion cast that a same-sex couple cannot constitute a faith-based family — what are we saying here? As the senator from Dekalb has pointed out, things have changed here, and now the law of the land has changed. It means that LGBT people are now protected and it took a long, long battle in the streets and in the courts to have that affirmed.”

She then called the idea that allowing this bill to pass would create more opportunities for adoption a “highly questionable proposition.”

“This proposition that we should encourage agencies and change our law and protect agencies that are going to deny loving families the opportunity to adopt is backwards on its face,” Orrock said. “You want more families coming forward to adopt children and reduce the load of children stuck in the foster system? The way that you do that is not to bar LGBT couples from adopting”

Sen. Parent said that passing SB 375 would send the message that the state of Georgia thinks it is okay to discriminate.

“It’s a slap in the face to same-sex couples that would consider adoption,” she said.

Parent then revealed that she and her husband are godparents to a baby with gay parents, and that her uncle and his husband have adopted as well.

“For these kids who are in foster care to have healthy, productive lives, the sooner that we get them into care, the better. And if that couple is gay, why does it matter?,” she said, adding, “Whether you’re gay or straight doesn’t have anything to do with making you a good parent.”

Senate Majority Leader Bill Cowsert then made a motion to end debate and vote, which Minority Leader Steve Henson objected to. The vote proceeded.

The business community has also gotten involved in the skirmish over SB 375, bringing recollections of the outcry against HB 757, the anti-LGBTQ religious exemptions bill that roiled the state and caused a national backlash two years ago before being vetoed by Gov. Nathan Deal. Both the Atlanta Chamber of Commerce and Georgia Chamber of Commerce have come out against this latest religious exemptions bill, and global payment technology services company First Data, which has 24,000 employees worldwide and is headquartered in Atlanta, announced its opposition in a Georgia Equality press release.

LGBTQ groups Georgia Equality and the Family Equality Council have been rallying followers to contact their senators and specifically Lt. Gov. Casey Cagle, the Republican gubernatorial candidate who has expressed support for the bill, to voice their opposition.

Both Democratic candidates for Georgia governor spoke out against religious exemptions bills like SB 375 at a candidate forum on Thursday per the AJC.

“I would love to walk around with a little veto pen on my ear, so they are reminded we have this veto power,” said former state Rep. Stacey Evans of the GOP-controlled Legislature. “Right now, Republicans are pandering to a segment of their primary that wants this hateful legislation,” Evans added, saying that a Democratic governor could ensure district lines are redrawn in a more impartial way.”

In her response, Abrams said Democrats must understand that many supporters of religious liberty proposals “authentically” believe in the legislation. To defeat it, she said, Democrats should more forcefully advocate for LGBT rights.

“We have to have someone who unabashedly says the LGBT community should have protection in Georgia,” she said, adding: “Our responsibility is always to lift a louder voice to demand that good people say what must be done.”

UPDATE: Reaction is beginning to pour in, and Georgia Equality announced a March 1 rally across from the Capitol.

“This is mean-spirited legislation that hurts Georgia’s families, does an incredible disservice to the thousands of children in the state foster care system, and really threatens our ability to attract vibrant businesses that strengthen our communities – like Amazon,” said Jeff Graham, Georgia Equality’s executive director, in the statement. “No one is trying to undermine freedom of religion in Georgia – that’s why religiously affiliated adoption agencies already enjoy the freedom to work exclusively with families that share their faith values. This legislation goes out of its way to make it harder for loving and committed same-sex couples to start a family – and unfortunately, it’s children in need of permanent homes who will pay the steepest price.”

The Human Rights Campaign issued a statement as well.

“Plain and simple — SB 375 is discrimination dressed up as a ‘solution’ to a fake problem,” said Marty Rouse, HRC national field director. “It creates an unnecessary hardship for potential LGBTQ adoptive or foster parents in Georgia and primarily harms the children looking for a loving home. It’s unfortunate that leaders are focusing on this bill, instead of concrete ways to improve the child welfare system in Georgia. We ask the Georgia House of Representatives to reject this bill.”

The Gay and Lesbian Alliance Against Defamation weighed in.

“Senate Bill 375 is a dangerous step backward that would codify permission to discriminate against the LGBTQ community into Georgia state law,” said GLAAD President and CEO Sarah Kate Ellis. “This bill is not about freedom of religion, which is one of our nation’s fundamental values, but rather about imposing one’s personal religious beliefs on others to discriminate against loving foster or adoptive parents simply because of their identity and deny services to LGBTQ youth.”

The Democratic Party of Georgia issued a statement.

“Thousands of kids in Georgia are waiting to become a part of loving families, and the GOP’s solution to this problem is to create new problems,” said Communications Director Michael Smith. ” When will Republicans stop targeting Georgia’s LGBTQ community out of political spite? Love is love, and when children need a home, they should be placed in the safe care of the Georgians willing to open their doors and grow their family. Period.”