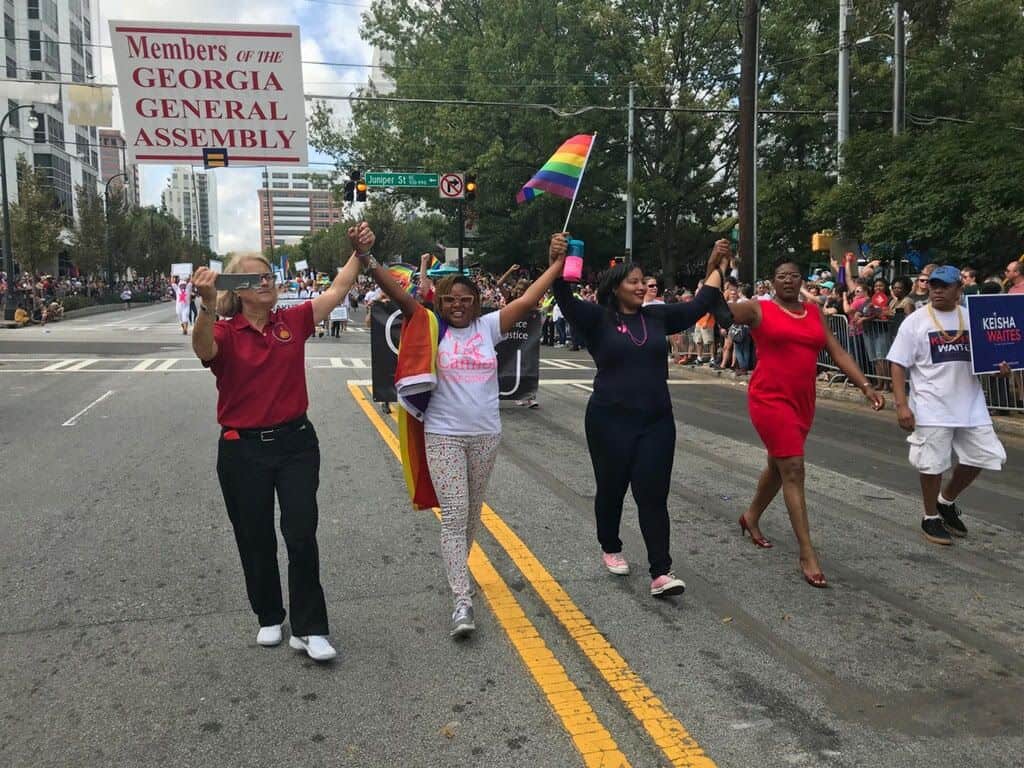 Bisexual individuals make up more than 50 percent of the country’s LGB citizens according to GLAAD, but it’s a community that often gets overlooked or mischaracterized.

“The general population is just more comfortable with folks picking a side,” state Rep. Renitta Shannon (D-Decatur) said. “I think that’s why a lot of people hesitate to come out.”

Shannon knows this firsthand. She came out as bisexual last October on social media, a decision she did not make lightly. Even today, she’s not sure how many of her fellow legislators know about her sexuality.

“I just felt like the LGBTQ community had been under so many attacks since Trump had been elected,” she said. “The second thing that pushed me over the edge, [former state Rep.] Keisha Waites sat behind me in office. With her leaving, it just felt like, I know I’m a really private person, but how can I sit here and not step into being a visible advocate for the LGBTQ community … and not say this literally applies directly to me too, and stand up and be counted? So I put my privacy aside and decided to come out.”

In her Facebook post, which was published on the eve of National Coming Out Day, Shannon said, “I am not only a consistent advocate for LGBTQ issues, I am a member of the LGBTQ community. I am a bisexual black woman.”

According to The Victory Institute, 13 elected officials nationwide identify as bisexual. Even more are members of the bisexual-plus portion of the LGBT community, said Alexandra Bolles, associate director of campaigns and external engagement for GLAAD.

“It’s just really invaluable for young bisexual-plus kids and teenagers to see themselves represented in the government, and that they have opportunities to see and achieve and maybe even run for office themselves one day,” Bolles said.

Shannon said this is where political storytelling can amplify the voices of bisexual-plus legislators.

“Most of the work that’s done for LGBTQ issues is almost always a gay man or lesbian. You just don’t see a lot of bi stories,” she said. “You never really see where people who are bisexual are chosen for the ambassadors or are taken seriously on gay issues.”

2018 is Shannon’s second session in office, and she told Georgia Voice she does plan to run for re-election. Before campaigning begins, she’s got legislation to keep an eye on.

Shortly before speaking to Georgia Voice in late January, Shannon learned that a bill was introduced that would “additionally criminalize people living with HIV.”

“I want the bill to be smart and not add to mass incarceration issues — really protect everyone without adding to the problem,” Shannon said.

Shannon, who now lives in unincorporated DeKalb with her pup Punky Brewster, never intended to run for public office. The Virginia-born, Florida-raised woman graduated from the University of Florida with a degree in sociology. After several years working in mental health facilities, she found her career calling in financial services, but spent most of her free time as an activist for economic justice issues once she got to the Peach State.

“I had a great career doing drug sales and a very successful career,” she said. “I wanted to keep it more my activism work on the side. … I worked on racial justice issues, equality, criminal justice, everything with the exception of environmental issues.”

Then her company got bought out. Shannon took some time off and did noting but activism work, even getting to lobby in Washington, DC. The experience was eye-opening.

“You start to look around and say, ‘Hmm, do I agree with all the decisions this person is making?’” she said.

Shannon ran for office in 2016 against a Democratic incumbent, who though she respects, said she did not feel was as strong a progressive as she was. House District 84 is primarily Decatur and the Agnes Scott College area — Shannon described the shape of the area as a spatula — that also includes Candler Road all the way down to Ellenwood and Lithonia.

Equality, including LGBTQ issues, was a major point in her campaign. But because she wanted her constituents to vote for her based on her stances, and not her personal life, she chose not to come out. After revealing her sexuality on Facebook, Shannon let her constituents know in the email newsletter she sent out at the end of the year.

“It’s definitely not something I’m going to run from. I walked in the Pride parade with the other gay members this year — this was the first year I walked with the other elected representatives who were LGBTQ,” she said. “I don’t think [my sexuality] will be an issue. I stand up to make sure everybody is fairly represented.”

As for her colleagues, Shannon doesn’t believe revealing her sexuality will change any established relationships in the state government.

“You can’t assume people’s sexuality,” she said. “It also helps that I had a relationship with them before coming out. Now it put folks in the situation like, if you liked me before you found out this information about me, you’d feel silly changing your mind.”