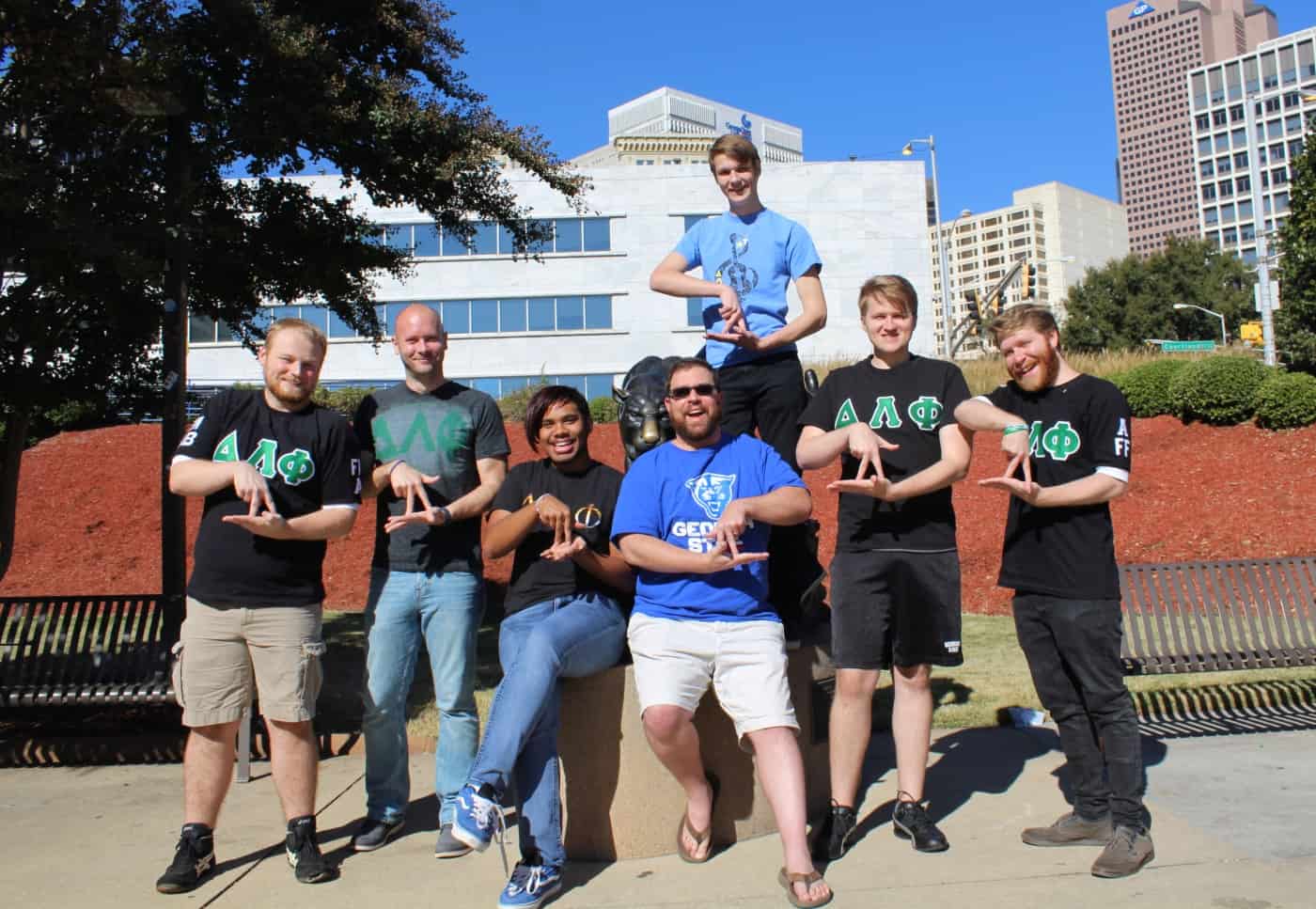 19-year-old Georgia State University sophomore Casey Meyer was hanging out in the meeting room for the school’s Alliance for Sexual and Gender Diversity this past January when he was approached by a fellow student named Chris Heraghty. Would he be interested in joining the school’s gay fraternity?

“My first thought was astonishment and pure excitement because I had no idea that a gay fraternity could be or was a thing,” Meyer says.

Indeed it was and is a thing as of 2013, when the first class (or “alpha class”) of national gay fraternity Delta Lambda Phi started at Georgia State. Meyer ended up joining Heraghty in the fraternity, which might seem like a new concept to many but actually has a history going back 30 years.

Idea spreads from D.C. to across the country

Delta Lambda Phi was founded in 1986 by Vernon L. Strickland III and three other men well beyond their college years who expressed regret at the limited opportunities for social engagement available to gay men at the time. The social groups that did exist suffered from internal division or were focused on little more than sex, they said. So why not create a progressive social fraternity based on the collegiate model?

They did, and by the next year had recruited their first Delta Lambda Phi pledge class, eventually initiating 24 men into full brotherhood in Washington, D.C. that April. The idea spread to cities and college campuses around the country, and there are now 35 Delta Lambda Phi chapters and colonies across the country, including three chapters in Florida, a colony at Vanderbilt University in Nashville, Tennessee and the colony at Georgia State. But wait, “colony?”

The difference between a chapter and a colony is that fraternity chapters have certain secrets (i.e. values and ideas of the fraternity) and rituals (like how pledges are inducted, or how pledges become brothers) that colonies aren’t privy to yet, explains Chris Bass, president of the Delta Lambda Phi colony at Georgia State.

Bass, a 21-year-old senior, joined Delta Lambda Phi as part of that alpha class that formed at Georgia State in 2013.

“I had come from a very conservative neighborhood in West Cobb,” he says. “I wanted to branch out. I wanted to do what you’re supposed to do in college: learn about yourself, learn new things. I knew I was gay and I felt like this was a great opportunity to meet gay people without fear of relationship stress.”

So relationships among fraternity members are frowned upon?

“It’s not frowned upon,” he explains. “You just have to be adult about it. You have to put the brotherhood first.”

Other fraternities on campus ‘very much accepting’

Delta Lambda Phi operates like any other fraternity on campus, with a mix of social events and community service projects (most of which are currently done with Open Hand Atlanta, but Bass says they’re looking to get involved with Lost-n-Found Youth too).

And they are part of the school’s Interfraternity Council (IFC), a group of five established and active fraternities on Georgia State’s campus. Knowing the stereotypes about some fraternities, are there any sideways glances at the gay fraternity during IFC meetings?

“It’s kind of funny. They actually very much are accepting of us, which was refreshing because we were afraid it wasn’t going to happen,” Bass says. “They see us as their equals. Even though we’re not part of their specific Greek organization, we are all brothers in their eyes. They always include us in stuff and they always support us when we include them in our stuff.”

From colony to chapter and more

The brothers of the colony at Delta Lambda Phi are in the process of raising the $900 fee they need to submit a chartering packet by Dec. 1 in the hopes of becoming a chapter. And while they don’t have a fraternity house on campus (not rare for a commuter school like Georgia State), they do hope to in the future.

Meanwhile, they’ll continue to recruit more members beyond the seven they have now—and that recruitment is partly focused on those who wouldn’t consider themselves the “typical” frat boy.

The freshman Meyer was one such student. He says he was recruited by several other fraternities when he arrived on campus but wasn’t interested—that was until Heraghty walked through the door that day in January.

“Before joining, I’d never really been a part of the gay community and it’s something that I’ve always desired because I’ve felt very sheltered for most of my life in regards to the ‘big gay world,’” Meyer says. “So it was like the doorway to all of that—having older gay men understand me and who could mentor me and guide me and be a role model.”