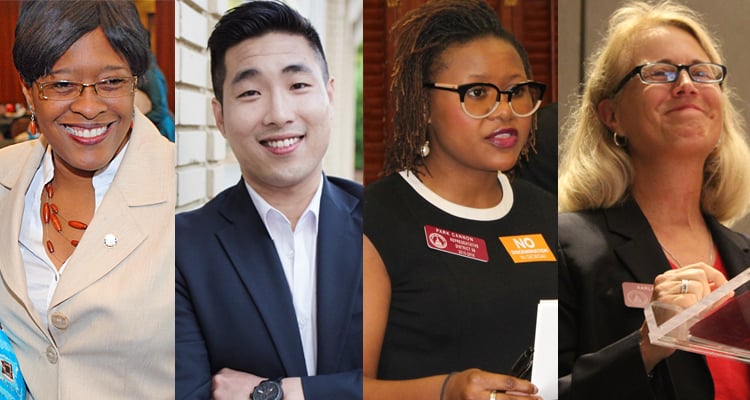 There’s an air of anticipation in downtown Atlanta this month as the 2017 General Assembly session gets underway.

“With the addition of [Rep. Sam Park (D-Lawrenceville)] and I this legislative session, we’re representing over 200,000 individuals not only in DeKalb and Fulton counties, but also Gwinnett County,” said Rep. Park Cannon (D-Atlanta). “Our reach is larger and our voice is larger.”

Park and Cannon join fellow LGBT legislators Rep. Karla Drenner (D-Avondale Estates) and Rep. Keisha Waites (D-Atlanta) this year, another link in a chain of triumphs. 2016 had several legislative victories for the LGBT community, including the veto of House Bill 757 and the inclusion of HIV care funding in the appropriations for Grady Hospital, and the four legislators are excited and cautiously optimistic for what this year will bring. Not only do they represent Georgia’s LGBT communities, but they represent other minority groups as well. Park is the only Asian-American in the General Assembly, and Cannon and Waites are women of color.

Park hopes to represent the voices of minorities, while doing “anything and everything” to ensure bills serve the best interests of all Peach State citizens.

“I’m very hopeful in that the millennials in our generation, also those coming after us, have a different understanding and view. When all is said and done, regardless of our differences, we’re all people. We’re all neighbors. We’re all Georgians,” Park said.

‘A healthcare crisis’ in middle and south Georgia

“I think there are a lot of opportunities for us as Georgia Democrats to move our legislative agenda forward. There’s also an opportunity to better define ourselves in terms of the Democratic Party, who we are as a party and what we stand for,” Park said. “The LGBT issues are an essential, critical part of our legislative agenda and party platform, being that we are the party of inclusiveness.”

He believes the General Assembly should place focus on what he calls “a healthcare crisis,” where 15 hospitals in middle and south Georgia are in a state of collapse. He hopes both parties will push for passage of the Bed Tax this session, which pools money from larger hospitals based on their number of indigent patients and brings matching federal funds.

“That pool of money then gets distributed down to some of these hospitals that have larger indigent populations, such as Grady,” he said.

Even Republican lawmakers expressed concern that some of those funds are going to consulting fees and not directly to the hospitals they’re designed to benefit, said Jeff Graham, executive director of Georgia Equality.

“I do believe the legislature is going to have to address this in some substantial way this year,” he said. “It may not be the conversations about Medicaid expansion that six months ago I had anticipated that they would be, but there will be conversations that will be happening and we will continue to make sure that whatever policy decisions get made, that we will do our best to ensure that it does help members of the LGBT community and people living with HIV.”

Graham said a major worry this year is direct attacks on the transgender community.

“Unlike lesbian, gay and bisexual folks, that most people have a coworker or a family member or a close friend … the experience of transgender people are still a bit more remote for the average Georgian,” he said. “While [North Carolina’s anti-LGBT] House Bill 2 has proven to be a cautionary tale that I do hope may have tempered some of the reactionary forces, again, going into an election year, you can talk about an issue without actually having a goal to pass legislation, and still have the effect of stigmatizing people.”

So far, the only pre-filed bill directly affecting LGBT individuals is House Bill 16. Waites said Georgia has plenty of legislation about bullying, but none combat the issue. HB 16 puts measures in place that address bullying based on sexual identity and gender, plus collect and assess bullying statistics.

“You want to track real progress, you need a measuring system to measure by,” Waites said. “You can’t just say, ‘this kid is bullied.’ You have to say ‘this child is African-American and is bullied on race; on gender; on he’s morbidly obese. We can direct sensitivity training on those issues.”

The bill received a hearing in 2016. Waites has another bill up her sleeve for 2017, which relates to banning conversion therapy in Georgia.

“It’s my belief, based on the findings, that conversion therapy does not work. It is my belief we have a right to protect children from these types of practices. It is my belief that they hide behind the guise of religious organizations,” she said. “I believe [the bill] will receive a hearing.”

Though Cannon and Park did not announce any proposed bills for their first full session, Waites offered words of advice for the freshmen legislators: get bipartisan support on everything, and care not about “who the quarterback is” on a bill.

“You may not get it passed, but it’s not uncommon for them to take your language and add it to a bill,” she said. “My point is that you can start out a session having gotten nothing done, but if someone takes your bill and rolls it into another bill, you will be amazed at the things you get done even if you’re not the quarterback.”

The elephant under the Gold Dome

“I think my excitement is frequently dulled by the anticipation of the forthcoming negativity,” she said. “I’m thankful to be there, but it comes as a double-edged kind of thankfulness.”

That’s due in part to the religious freedom bills, or RFRA, introduced across the country in recent years. Gov. Nathan Deal vetoed HB 757 last session, an attempt made by conservative legislators to pass such a bill here.

Cannon believes the push for religious freedom bills stems from people being committed to their families, and she responded in kind over the holiday season, thanking legislators who voted against HB 757 for allowing the time with her family to not be soured.

“One of the issues I’m hearing about in the community is that people feel as though from the national level to the state level, they won’t be listened to anymore. That those overreaching voices of hate will come into their homes and will tear up what they’ve created, which is a family of love,” Cannon said. “We all want to make sure that there’s someone in our government who is listening. I’ve been excited to stay in touch with legislators, to remind them that listening is a part of our job.”

Park challenged the faith and LGBT communities to come together and discuss not just the politics of religious freedom bills, but to understand how the culture of hatred and fear came to be in the first place.

Cannon agreed, and said the conversations also need to happen with schools, healthcare and other organizations. She said the LGBT communities “are feeling stifled … almost silenced” because of the national rhetoric and the president-elect’s platform, and advised legislators to conduct town hall sessions about LGBT rights.

“See what comes up,” she said. “If it’s more than just the continued rhetoric about frustration; about pastors having to marry other people; or if it’s really about civil rights protections, I do feel as though if we continue to listen to people enough we will see that across the state of Georgia, there is no need for discrimination to be signed into law.”

Park believes the appetite for anti-LGBT bills is diminished, and said he hopes Georgia won’t see any in 2017, especially given what happened after North Carolina passed House Bill 2.

“I think the impact of a bill like [a religious freedom act] would be much greater than what we saw in North Carolina,” he said, referencing Georgia’s budding film and television industry. “We saw these industries would feel uncomfortable and unwelcome in a state that passed such legislation. Not only would we be wasting hundreds of millions of dollars that we spent trying to foster this industry, any potential business that we would create in Georgia, whether that’s jobs or bringing additional business into the state, that would be diminished as well.”

‘The fight’s not over’

All four of Georgia’s LGBT delegation said if the Pastor Protection Act — the first form of HB 757 — was introduced again, as originally written, it would be supported.

“It was a compromise bill that both parties had to come to agree to. It would not have resulted in harm to the LGBT community, and it addressed some of the fears that came from the faith community and assuring them that they would not be required to perform same-sex marriage,” Park said.

Graham said he was moved in hearings when listening to pastors worry aloud that they would be locked up for not wanting to marry a same-sex couple.

Graham expressed interest in helping legislators develop a comprehensive civil rights bill for Georgia that would balance protection for all parties.

Waites said it was important to her to allow people to “believe their beliefs.”

“I believe there was nothing in the existing Pastor Protection Act, that we all supported, that would be mean-spirited toward LGBT people in its existing language. However, it changed. Once it changed and other language was added to the bill, that’s when I made a decision, as did others, to not support 757,” she said.

Drenner said despite the 2016 veto, there’s still concern from all levels of government that discriminatory legislation could be introduced. She had a direct message to the LGBT community, reminding them this is just the beginning.

“The fight’s not over,” Drenner said. “There is this third wave of bills that are being introduced across the country and they are the backlash against same-sex marriage. You can’t disengage now. Because if you don’t show up, you may wake up and we may be worse than North Carolina. You have to continue to be vigilant about what’s going on, knowing that our war for equality continues.”