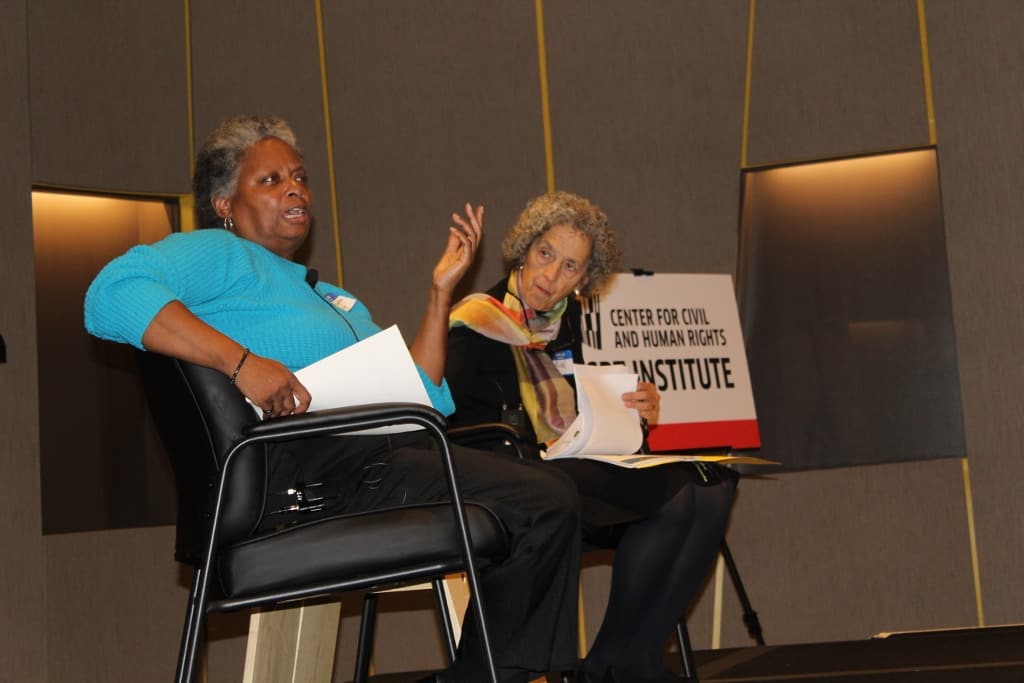 When the programming board of the LGBT Institute at the National Center for Civil and Human Rights walked out of their August meeting, they had in hand a list of three areas to focus on in the years ahead: criminal justice and safety, education and employment, and public health and wellness. Monday evening, the Institute held its first public event addressing those areas, The Global-Local Connection for LGBT Rights.

The event, which drew roughly 100 people, featured a wide-ranging panel discussion with Mandy Carter, co-founder of Southerners On New Ground and the National Black Justice Coalition, and Ruth Messinger, president and CEO of American Jewish World Service. It was moderated by Institute programming board member Tim’m West.

If many aren’t familiar with the American Jewish World Service and wonder about their inclusion in such an event, it helps to know that they are the fourth largest U.S.-based funder of international LGBT work. But it’s a fact that Messinger wanted those in attendance to put in perspective.

“When you hear that…it actually makes us feel wonderful until we look at each other and say, ‘That’s a portfolio of just under $3 million,’” she said, which appeared to surprise most in the audience. “So imagine the need in the world for individuals and groups to step forward.”

While Carter provided a regional and national perspective and Messinger provided a global perspective on LGBT rights, the local perspective was provided by those in attendance. It helped that the diverse crowd included members of various LGBT nonprofits and other organizations across the city, including Lambda Legal, Atlanta Pride, Charis Books & More, Georgia LGBTQ Archives Project, AID Atlanta, the LGBT Caucus of the Democratic Party of Georgia, Point Foundation, Human Rights Campaign, Touching Up Our Roots, History of Black Gay America, Juxtaposed Center for Transformation and others.

The evening’s conversation covered an array of topics, including but not limited to anti-LGBT laws across the world, bullying, the school-to-prison pipeline, Black Lives Matter, Trans Lives Matter, the role of social media in activism, HIV/AIDS and LGBT elders.

“It seems to me…when you look at how change happens in society, there tends to be two trends,” Carter said. “The changing of hearts and minds and all that encompasses…and the changing of public policy.”

And while she supports the Black Lives Matter movement, she did express concerns, saying, “You know how one minute we love Lay’s potato chips because it tastes great until the next thing that comes along? And that’s no shade on Black Lives Matter, but I’m thinking how can you take that and make sure that if I’m living in a real rural area…I’m not on a campus, I’m not near a major city, is there a way that that can translate to where I live?”

A common message from both panelists throughout the night was to get involved, or as LGBT ally U.S. Rep. John Lewis often says, “Speak up and speak out.”

“We all get one vote,” Carter said. “Please don’t waste it. Figure out how we multiply it and utilize it.”