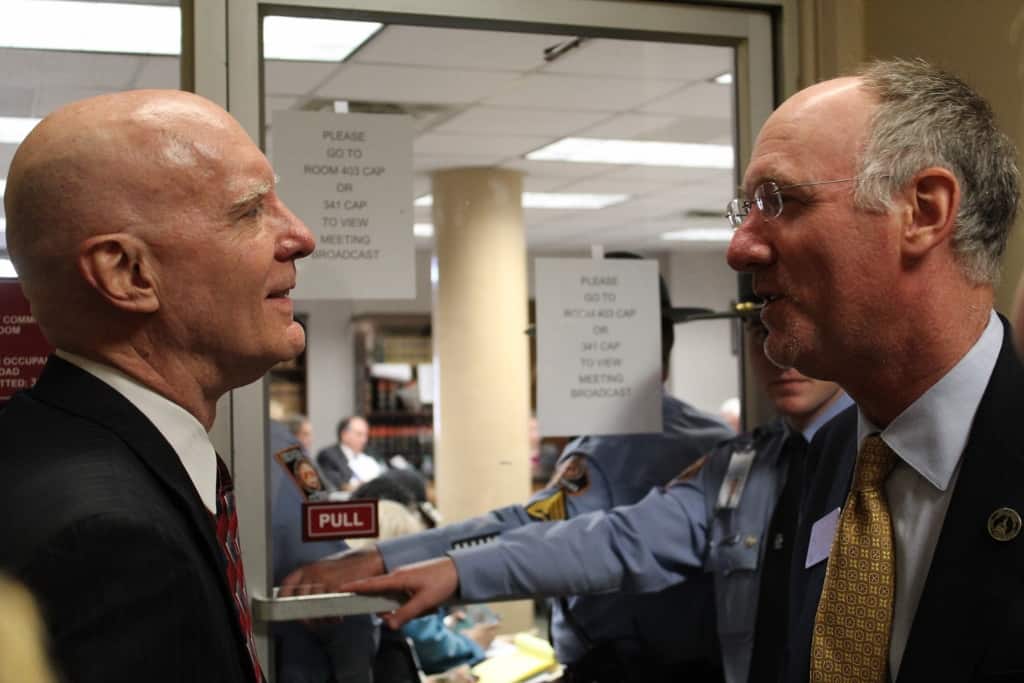 A lot has been said since Feb. 19 when the Senate passed a hybrid anti-gay “religious freedom” bill, but the million dollar question remains: what will the House come up with now that House Bill 757 is back in their hands? It won’t be discriminatory if Gov. Nathan Deal has anything to say about it, as we now know.

Well, two Republican lawmakers have proposed a possible 'compromise.' The AJC has the details via an email state Rep. Allen Peake (R-Macon) sent to the governor with the nuts and bolts of his and state Rep. Beth Beskin’s (R-Atlanta) proposal:

Their plan, revealed in an email to Deal’s aides and House Speaker David Ralston obtained Tuesday through a public records request, would strip the Senate proposal of language that would enable faith-based organizations and individuals to opt out of serving couples while keeping the part that states clergy could not be forced to perform a same-sex wedding ceremony.

He would also add a line declaring that no business “shall be required to sell goods or services directly to a religious organization or for a religious or matrimonial ceremony.”

Peake then references his brother Merwin Peake, a corporate recruiter who spoke out against state Sen. Josh McKoon’s (R-Columbus) so-called “religious freedom” bill last year. But keep in mind that Peake was a co-sponsor of state Rep. Sam Teasley’s (R-Marietta) “religious freedom” bill last year (which Teasley later dropped) and believes marriage should only be between a man and a woman.

“Guys, as you know I have a gay brother and have serious concerns about the language added in the Senate onto HB 757,” Peake wrote, referring to the legislation. “I sure don’t want us to pass any legislation that would cause him to be denied service or turned away from a restaurant or hotel, just because he is gay.”

He added: “But I also fully understand and support that he should not expect someone to ‘participate’ in his gay wedding, if that participation violated an individual’s religious conviction.”

Peake, who was once part of Deal’s legislative team, said in the email the idea “hits the heart of the matter of making sure there is no forced participation in a wedding ceremony, but also makes sure we don’t allow discrimination against folks like my brother.”

The Peake/Beskin proposal is reportedly one of several that House Speaker David Ralston is considering.

This is no compromise. It is a full embrace of discrimination rejected by every state to date, including KS. #gapol https://t.co/HtLqUrG4PX

There is no middle ground with FADA. It’s designed for discrimination. On RFRA, we can talk. #gapol https://t.co/58wrMYo7I6

Tick-tock, tick-tock as we head toward Sine Die on March 24.