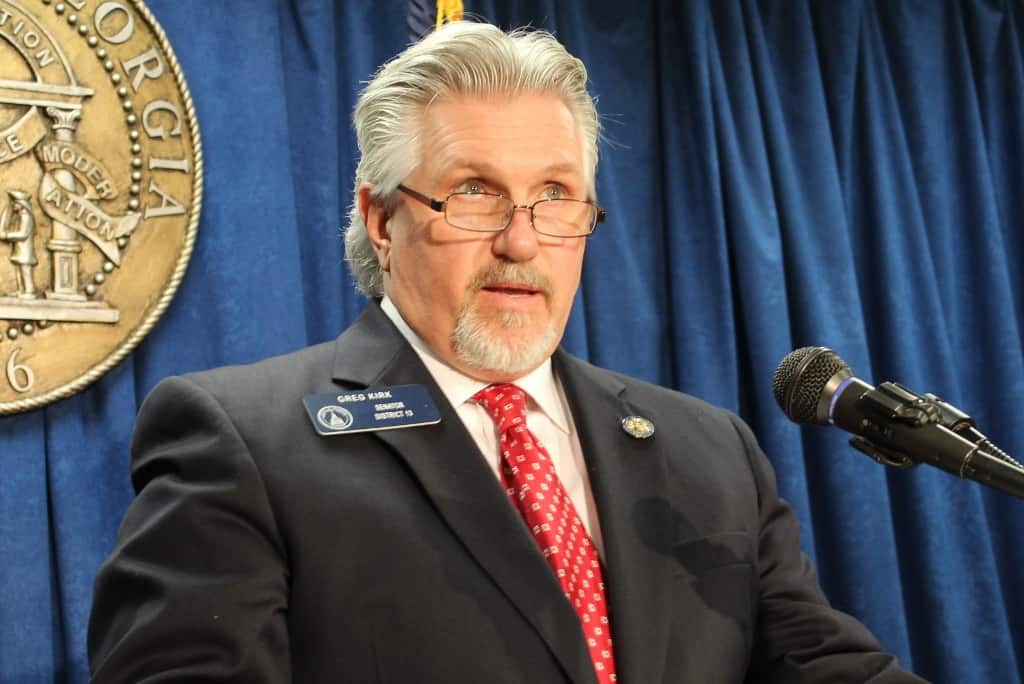 State Sen. Greg Kirk (R-Americus) addressed the media on Tuesday to defend a controversial anti-LGBT so-called “religious freedom” bill, citing the effect marriage equality has had on countries like Canada, Mexico and the United Kingdom. He also confirmed specifics about the bill regarding local nondiscrimination ordinances and called on Gov. Nathan Deal to sign the bill into law.

“It’s time for our governor to step forward and sign the bill that the people of Georgia clearly want,” Kirk said Tuesday. “The bill has been vetted thoroughly through both chambers of the General Assembly. Now I appreciate the fact that our governor is taking a slow, methodical view of the bill before he signs it. But in the end, I’m sure that he’ll find that this is the best bill to protect everyone in Georgia.”

Kirk addressed several issues raised by opponents of the bill, including whether the bill would supersede local nondiscrimination ordinances. A clause in the bill says it can’t be used to allow “discrimination on any grounds by federal or state law,” but there are no nondiscrimination protections for LGBT people in Georgia on a state or federal level. When pressed on whether the bill would cancel out those LGBT non-discrimination ordinances in 60 jurisdictions across the state—including Atlanta—Kirk confirmed the point, saying, “Federal law trumps state law and state law trumps local law. That’s the way it works.”

Kirk repeatedly claimed that he had an “open door policy” on discussion about the bill but confirmed that he did not consult with Reps. Karla Drenner (D-Avondale Estates), Keisha Waites (D-Atlanta) or Park Cannon (D-Atlanta) before introducing the revised version of the bill last week. Drenner, Waites and Cannon are the only openly LGBT lawmakers in the General Assembly.

“I’ve listened, I’ve made adjustments. Now we need to look at where we are in this state and this nation and deal with the real issues,” Kirk said. “Will our state and nation going forward be a state and nation that is intolerant of those who express a sincerely held belief that marriage is between a man and a woman? And will expression of that belief in the workplace or marketplace lead to sanctions by local, state or federal government in the name of tolerance? I say no. That’s not the America that I grew up in, and by the governor signing this bill into law, it preserves freedom.”

Focus On The Family cited as resource on marriage equality research

Kirk began the press conference by claiming he had done several months of research about the effect marriage equality has had on other countries and cited several publications in defense of the bill. Included in his argument were articles from the Western Journalism Center (founders of WorldNetDaily, publisher of numerous conspiracy theories regarding President Barack Obama’s citizenship), CNS News (the article’s writer Dawn Stefanowicz is the author of “Out From Under: The Impact of Homosexual Parenting”), and the Witherspoon Institute.

Kirk also directly quoted from a list (called “9 Ways Redefining Marriage Impacts Your World”) that Focus On The Family published in the wake of last June’s U.S. Supreme Court decision on marriage equality. The Southern Poverty Law Center has labeled Focus On The Family a hate group.

While state Rep. Kevin Tanner (R-Dawsonville) was the initial author of the bill when it was introduced early in the session, Kirk took over as the face of the legislation after inserting the anti-LGBT language of his House Bill 757, dubbed at the time as the First Amendment Defense Act. Kirk is the Senate sponsor of the bill, now dubbed the Free Exercise Protection Act as of March 16 when a revised version of the bill passed in the House and Senate.

Also, the revised bill includes much of the language of the federal Religious Freedom Restoration Act of 1993, which requires government to prove a “compelling governmental interest” before it interferes with a person’s exercise of religion. There’s a provision added that says it cannot be used to allow “discrimination on any grounds prohibited by federal or state law” but there are no federal or state laws that expressly protect Georgia’s LGBT community against discrimination.