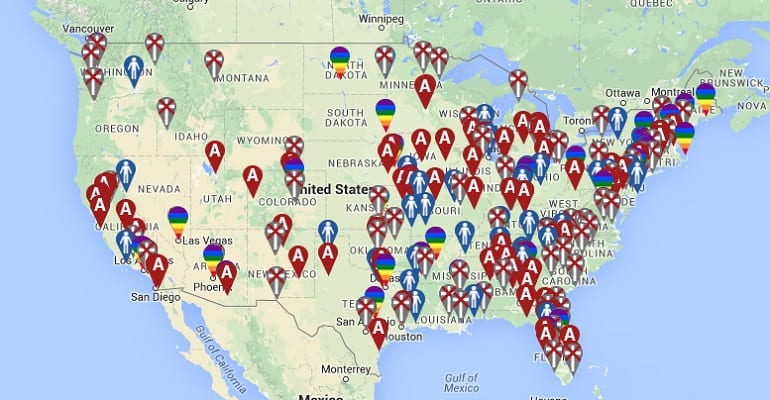 The American Family Association has long been deemed a hate group by the Southern Poverty Law Center, and the SPLC will give you one or two or 147 reasons why on their website. Count the AFA’s latest creepy move as reason 148.

On the AFA’s website, you can now find what they call their “Bigotry Map” with the helpful sub-headline “Exposing Anti-Christian Bigotry In America.” There you can view, and find directions to the front door of, organizations throughout the country that the AFA views as atheist, humanist, anti-Christian or, of course, having a “homosexual agenda.”

And count the Atlanta chapter of the Gay, Lesbian & Straight Education Network (GLSEN) as one of the groups the AFA wants their members to know about—and know where to find.

“Infiltrates public schools with pro-homosexual indoctrination tactics, confusing many young people and misleading them into making dangerous and unhealthy lifestyle choices that will negatively affect their entire lives,” the description of GLSEN Atlanta reads.

While anyone could find most of the groups on the map themselves with some internet sleuthing, the AFA posting the location and the reason for a group being “anti-Christian” is more than a little unsettling.

We’ve reached out to GLSEN Atlanta for reaction and will follow up once we receive a response.

UPDATE:  GLSEN Atlanta chair member Patrick Faerber was not only surprised to see his group on the map but also surprised they were the only LGBT organization in Georgia listed.

“I thought that was really strange,” he says. “We’re a new chapter in Atlanta, less than a year old. I was a little surprised we were the only ones called out.”

Faerber also says the location that the American Family Association listed on the map is wrong. And what about that accusation that GLSEN Atlanta “infiltrates public schools with pro-homosexual indoctrination tactics?”

“It was really kind of disturbing to think that they would think that,” Faerber says. “Our mission is to make schools that are inclusive of students regardless of their sexual orientation or gender identity, and that includes religion. A lot of our board members are Christian and took exception to the accusations made against us.”

In less disturbing news, GLSEN Atlanta has teamed up with Georgia Equality to create a metro Atlanta LGBTQ youth leadership conference. They had their first meeting on Saturday and will analyze the research from that one and meet again in the next couple of months to take the next steps.