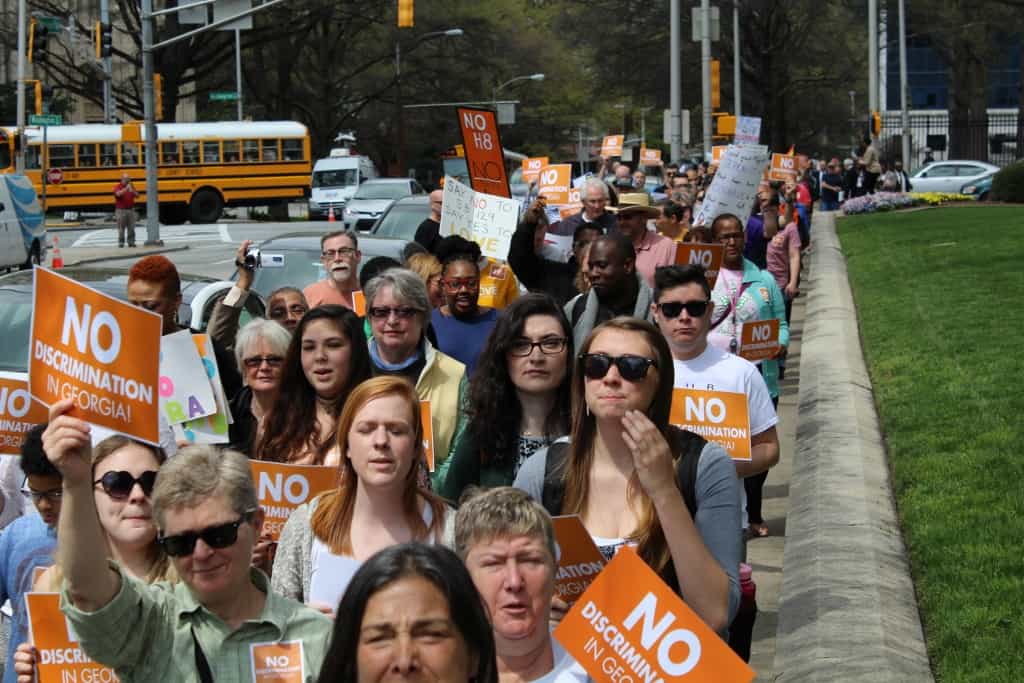 An academic group with 1,200 members and a $650,000 investment has vowed to move its conference out of Atlanta if a controversial “religious freedom” bill becomes law. House Bill 757 is currently called the “Pastor Protection Act” but it took on a completely different look after the anti-gay language of state Sen. Greg Kirk’s (R-Americus) First Amendment Defense Act was inserted into it, opening up the door to discrimination against the LGBT community and other groups.

“This bill authorizes discrimination against sexual minorities and as such we find the bill morally objectionable and socially destructive,” Southern Sociological Society president Barbara Risman tells the AJC. “Discrimination is in direct conflict with the principles of our organization and will prevent us from doing business in the State of Georgia.”

This latest news comes in the midst of a national backlash since the Senate passed the bill a week ago today. And it’s on top of comments made by Salesforce CEO Marc Benioff on CNBC on Wednesday. When asked by “Mad Money” host Jim Kramer about Apple CEO Tim Cook’s fight with the FBI over encryption software, Benioff pivoted to the HB 757 fight.

“I think that what Tim Cook should be doing is getting down right now to the state of Georgia and going down and talking to those leaders and talking about House Bill 757 because we’re very worried about what’s happening to our employees down there with more discrimination, like what we fought back in Indiana last year just reared its head in HB 757. And that’s what I think Tim Cook should be focused on right now.”

The fight in Indiana Benioff mentions is in reference to his scrapping Salesforce events in Indiana following passage of an anti-gay “religious freedom” bill there last April. Indiana legislators and Gov. Mike Pence later softened the measure. Benioff later had a conference call with analysts where he talked about scaling back in Atlanta. Per the Atlanta Business Chronicle:

“We’re looking squarely at what’s going on in Georgia with House Bill 757, which means that we may have to reduce our investments in the state of Georgia based on what we’re seeing with the state government there…,” Benioff said in a conference call with analysts. “And I hope that they see the light the way that the state of Indiana did.”

How big a deal is cloud-computing company Salesforce in Atlanta? Here’s a glance per the ABC:

State Sen. Josh McKoon (R-Columbus), whose own “religious freedom” bill remains stalled in a House committee, took to the Senate floor Friday to hit back at Benioff.

“Salesforce does business in Singapore and India. What is important to note about the laws of India and Singapore is that they make homosexuality a crime punishable by imprisonment,” McKoon said, adding, “While this gentleman seems to think there’s a problem with providing modest protections for the religious liberty of 10 million Georgians, he has absolutely no problem doing business and making money in countries where being homosexual is a crime.”

Benioff and McKoon then got into it on Twitter after Benioff tweeted the following Friday afternoon:

Which led to a McKoon response and a Benioff Bible verse.

Get a room you crazy kids.

On Thursday night, Georgia Prospers, the coalition of over 300 businesses formed to combat such legislation, announced that Atlanta Hawks vice chair and co-owner Grant Hill had been added to the group’s advisory board.

“It is so important to keep alive the values of good sportsmanship, fairness and inclusion that were engrained in me as an athlete,” Hill, a seven-time NBA All Star, said in a press release. “That’s why I believe in the good work of Georgia Prospers. It is critical, now more than ever, that our state supports diversity and inclusion in the workplace.”

The Atlanta Hawks are members of Georgia Prospers along with several other of the city’s pro sports teams, including the Atlanta Braves, Atlanta Falcons and Atlanta Dream.

And the Georgia chapter of the NAACP has jumped into the fray, with chapter president (and Baptist minister) Dr. Francys Johnson penning an editorial in Neighbor Newspapers on the subject. Per the good reverend:

Let’s be honest: a lot of these bad bills we’re seeing are aimed at hurting those in the lesbian, gay, bisexual and transgender (LGBT) community. Our LGBT friends and neighbors have seen their civil rights finally take some important leaps forward in recent years, and many aren’t happy about that. So they seek to use the cloak of religion as a method of holding back those civil rights.

But these types of bills threaten all of us. These types of bills could be used to harm single mothers, religious minorities and the most vulnerable in our communities. They may be crafted with an eye toward hurting LGBT people, but they stand to hurt us all.

HB 757 is now the House’s burden, and Gov. Nathan Deal and House Speaker David Ralston are reportedly working behind the scenes to clean up the mess. It will likely not get taken back up until after Crossover Day on Feb. 29.

UPDATE: Another editorial against the bill, this one from small business owner Lisa Calhoun in today’s Atlanta Business Chronicle. A snippet:

A free market economy is only free if both sides of the market can choose. The customer gets to choose who she gives her business to. But to be able to do that, the customer can’t be randomly barred. Just imagine next time you pop into an Uber, if the driver takes one look at you and says her mission-centric stance won’t let her serve you. Imagine next time you sit down at a table, if the waiter says your kind (whatever that is) isn’t welcome, because that restaurant has a set of beliefs you don’t look like you also believe. Pretty soon, your trust in the sacred contract of capitalism is broken. Over time, we all splinter into smaller and smaller groups of “us” versus “them.” The level playing field of a free market is fenced off into tiny plots of idiosyncrasy.