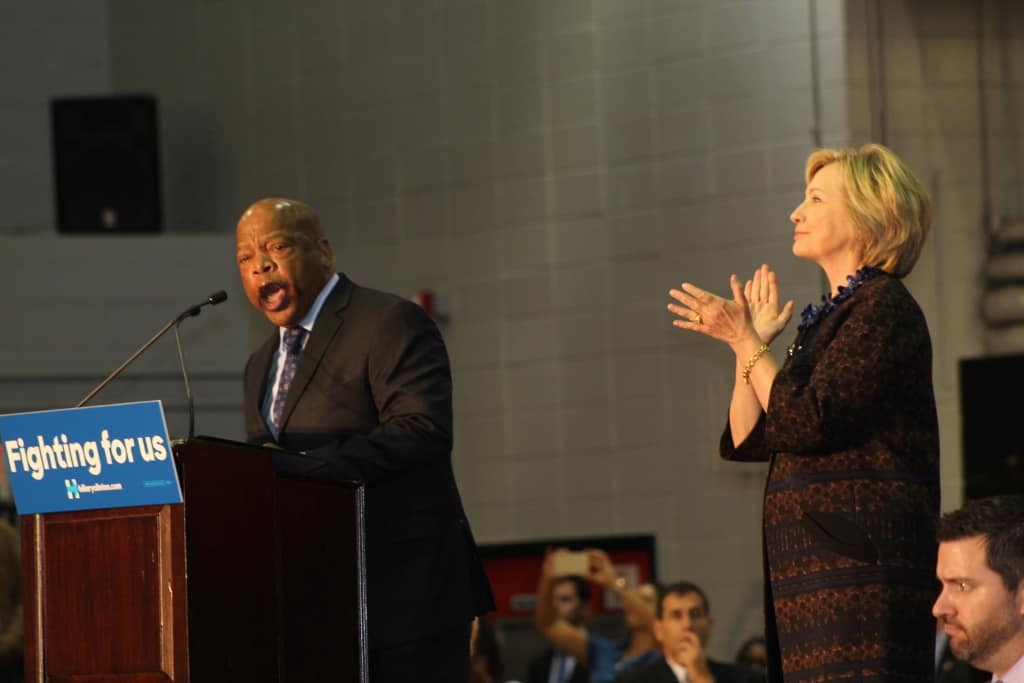 Hillary Clinton made her first public campaign visit to Atlanta on Friday afternoon as numerous LGBT community members and allies looked on. The rally, held at Clark Atlanta University, was both a roll-out of the African Americans for Hillary group and an announcement of the presidential candidate’s new criminal justice reform policies.

Things began well enough with a speech by Grammy-winning R&B singer Monica followed by a rousing rendition of the national anthem by singer Kelly Price. But after an introduction by U.S. Rep. John Lewis and cheers from the roughly 1,000 in attendance as Clinton launched into her speech, a dozen young African-American protesters emerged from stage left, chanting “black lives matter” and reciting Atlanta-based singer Janelle Monae’s “Hell You Talmbout,” a protest song about the killing of black Americans by police officers.

What followed was an interesting meeting of the old and new guard of civil rights activists, as former Atlanta Mayor and U.N. Ambassador Andrew Young and Rep. Lewis stepped in to try to talk the young protesters out of continuing. Atlanta Mayor Kasim Reed, former Atlanta Mayor Shirley Franklin and Fulton County Commission Chairman John Eaves joined in to no avail, as the protesters continued to sing and chant, often drowning out Clinton as she plowed through her speech. Rep. Lewis and Mayor Reed even took to the stage and stood behind Clinton in a show of support until security ultimately escorted the protesters out after 10 minutes.

The group behind the protest issued a press release that day, identifying themselves as AUC (Atlanta University Center) Shut It Down, a coalition of students from Clark Atlanta, Spelman and Morehouse in protest against state violence against people of color and the exclusion of other minority groups, including LGBT people, in addressing public issues.

Sidenote: TMZ is reporting that singer Usher “saved” Clinton from the protest. Usher had no part in getting the protesters to leave the gym, although he was spotted outside the rally talking to protesters about their tactics. Also TMZ incorrectly reported that the event was in South Carolina. Then again if you’re getting your political fix from TMZ then we can’t help ya there, folks.

In addition to our coverage of local politics, Georgia Voice will be covering all the major candidates for president, especially in regards to their stances on LGBT issues, in the next 12 months leading into election day. So keep your eyes peeled all you Log Cabin Republicans and all of those “feeling the Bern.”

Check out our photo gallery below from the rally, including the attempts by Young, Rep. Lewis, Mayor Reed and others to intervene in the protest.