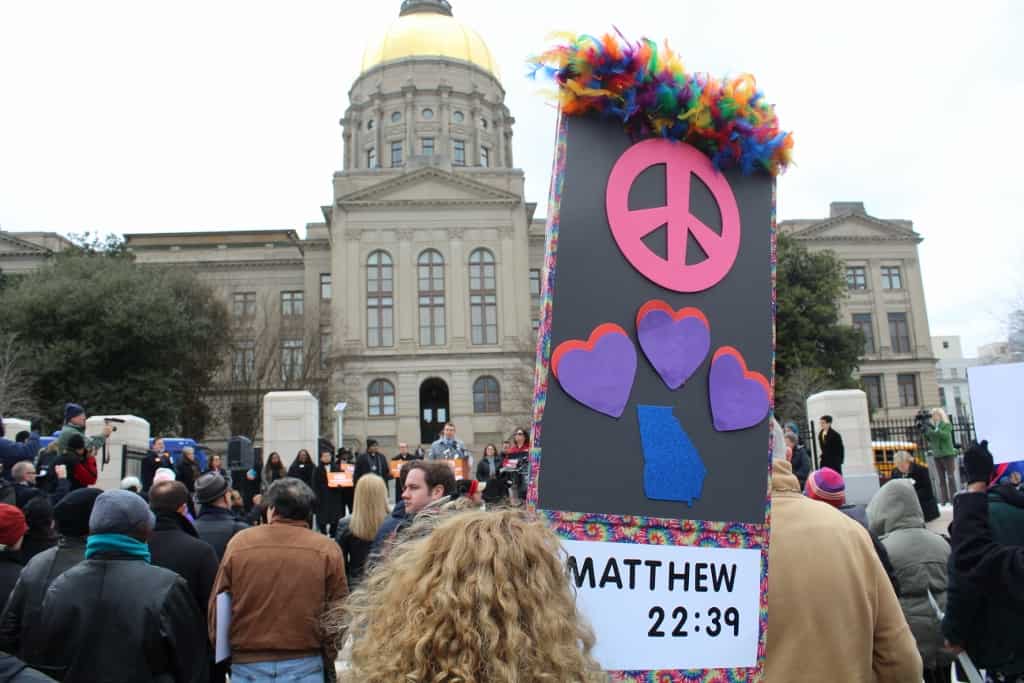 Roughly 150 opponents of the numerous so-called “religious exemptions” bills under consideration in the Georgia legislature braved the cold and descended on the State Capitol on Tuesday afternoon to voice their opposition.

The rally, organized by LGBT rights coalition Georgia Unites Against Discrimination, took place in Liberty Plaza roughly a year after a similar rally. While that event featured mostly faith leaders on the speaker list, this year’s rally included speakers from a broader coalition, including Lambda Legal, Georgia Republicans for the Future, Women Engaged and Asian Americans Advancing Justice, as well as several faith leaders.

Georgia Equality executive director Jeff Graham hit back against the bills’ supporters who say that they will do no harm, citing a lawsuit filed by conservative groups in Indiana (where similar legislation passed last year) to strike down municipal ordinances protecting LGBT people from discrimination.

Rabbi Pamela Gottfried made a biblical reference to the bills, saying, “Like a wolf in sheep’s clothing, this legislation seeks to harm the most vulnerable members of our society—citizens without protections under a state constitution and without legal recourse against discrimination.”

And Rev. William Flippin, a regular at rallies and press conference in opposition to such bills, said, “We have noticed legislators of our great state walking around like Lady Macbeth with their hands still figuratively dripping with evidence of harm to humankind. As found in the book of the prophet Isaiah chapter one, the bloody hands I am referring to are stained by injustice and indifference. We are here today, not to storm the Capitol…but to give warning that the stain of injustice will not stand for those who oppress because the moral arc of the universe bends and will continue to bend toward justice.”

Among the bills that many are concerned would lead to LGBT discrimination are Senate Bill 129, state Sen. Josh McKoon’s (R-Columbus) state version of the federal Religious Freedom Restoration Act (RFRA).

In addition to McKoon’s, there’s Rep. Kevin Tanner’s (R-Dawsonville) Pastor Protection Act, which solidifies something that’s already part of the law although some see parts of it as being too broad. House Bill 757 sailed through a House subcommittee last week and will go before the full House Judiciary Committee on Tuesday afternoon. Tanner’s also responsible for a bill that would allow businesses to cite religious beliefs in refusing services for same-sex weddings.

State Sen. Greg Kirk (R-Americus) has his First Amendment Defense Act, which would protect individuals, churches and businesses from same-sex marriage by prohibiting them from facing legal penalties and gutting LGBT non-discrimination ordinances across the state. However, Kirk says his bill will not allow court clerks to refuse to issue same-sex marriage licenses.

And an attempt to insert LGBT protections into a civil rights bill that would protect against discrimination in public accommodations failed in a House subcommittee Monday afternoon. House Bill 849 will now go before the full House Judiciary Committee on Tuesday afternoon, when conversation about such protections is expected to return.