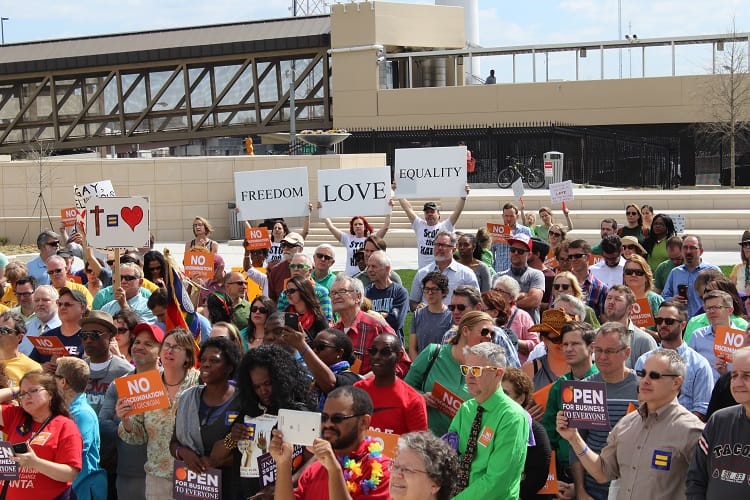 As the days dwindled before the fate of state Sen. Josh McKoon’s so-called “religious freedom” bill is decided, hundreds of opponents of the bill gathered for a rally to make one last visible stand.

The March 17 rally took place at the Liberty Plaza next door to the Georgia State Capitol and was organized by Georgia Unites Against Discrimination, the LGBT rights coalition group consisting of Georgia Equality and the Human Rights Campaign.

Rabbi Joshua Heller of Congregation B’nai Torah mentioned the ongoing debate in the Jewish community over verses in the Bible, such as those in Leviticus, that some construe as being against homosexuality.

“I’ve read those passages in Leviticus,” he said. “But I’ve also read Leviticus 19:18 that says ‘Love your neighbor as yourself.’ And I’ve read Leviticus 25:17 that says ‘Don’t oppress your neighbor.’ And I can be no less serious about those verses than any other in the scripture that I hold dear. And so when I see someone citing Judaism, citing the Holy Torah to exclude people from a larger society, to impede human beings trying to live in human dignity, I must say ‘Not in my name, not in our name, not in God’s name.'” Read his entire statement here.

Rev. Tim McDonald, senior pastor First Iconium Baptist Church, spoke up for people of his faith as well, saying, “Something is deeply wrong in this state that we would target and discriminate against a people in the name of religion. The religion that I am a part of does not discriminate against anybody because of their sexual orientation, their races, their beliefs. They are allowed and should be allowed to believe whatever they want to believe, but we should never allow them to impose their beliefs and to legislate their beliefs upon those of us that believe differently.”

Macon Circuit District Attorney David Cooke, who cited the dangers of an increase in child abuse in his well-publicized editorial in opposition to such bills, repeated those points as well as the danger to women.

“When I heard of these so-called ‘religious liberty’ bills, the first thing I thought of was the lack of necessity. Have these folks not heard of the First Amendment? I thought there was no real need,” Cooke said. “But what I also saw was a very real danger.  A danger to every child whose parent believes in ‘spare the rod and spoil the child’ regardless of the size of the rod and the number of lashes it takes to get what they want. I thought of the very real danger to every woman whose husband believes that God has ordained her submission, enforceable by his own hands.”

The rally occurred as attention on the bill during this year’s legislative session reached its peak, with even music legend Elton John ringing in with an Atlanta Journal-Constitution editorial blasting SB 129 as a “wolf in sheep’s clothing” designed to discriminate. McKoon’s bill passed the Senate on March 5 and this year’s session is expected to finish up on April 2, meaning their are only days to get enough votes in the House to pass the bill.

While the legislature was out of session the day of the rally, state Sen. Vincent Fort attended and was recognized by Graham.