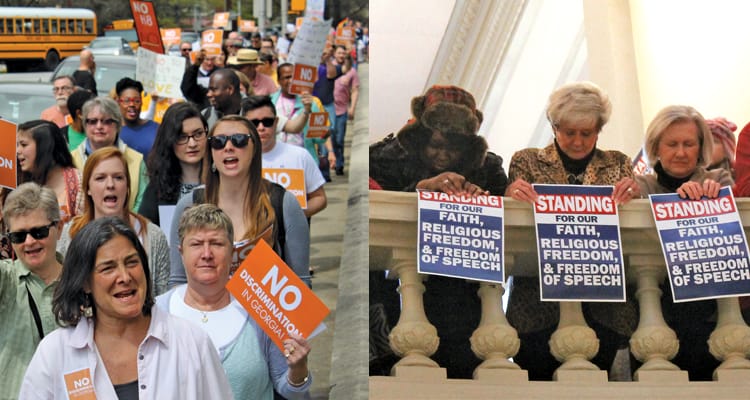 Is the ‘Utah Compromise’ a way through for Georgia LGBT, faith communities?

Last March, a bill passed in the Utah state legislature that banned discrimination in employment and housing on the basis of sexual orientation and gender identity. But the bill exempted religious organizations, their affiliates and the Boy Scouts of America from that piece of the law, and added protections for employees who talk about religious or moral beliefs as long as the speech is reasonable and doesn’t reach the level of harassment.

The bill was called the Utah Nondiscrimination and Religious Freedom Act, but it quickly gained an alternate name throughout the nation—the “Utah Compromise.” And it happened in a state where Republicans control both chambers of the legislature by a wide margin and occupy the governor’s mansion, and in a state where a sizable faith community routinely plays a dominant role in the political realm. Sound familiar?

At a time when the battle to pass a so-called “religious freedom” bill has entered its third year and newly proposed bills aiming to carve out religious exemptions at the expense of the LGBT community are popping up left and right, could the Utah Compromise clear a path through the rancor and give new protections to both the LGBT and faith communities in Georgia?

Stakeholders can’t think ‘in ways that cause collision’

Robin Wilson is a University of Illinois law professor who worked with the Utah legislature to help the Utah Compromise get passed, and now she’s been traveling the country spreading the good word about the bill.

She says she worked with both sides in Utah to get them to stop thinking “in ways that cause collision.” For instance, if officials were given the right to refuse to issue marriage licenses to same-sex couples based on their religious beliefs, there had to be a mechanism in place that assured that somebody is there to issue the license so everybody has the ability to get married no matter where they live in the state. In other words, you don’t get the scene that took place in Rowan County in Kentucky last year, where a same-sex couple was repeatedly turned down for a license by the clerk-who-shall-not-be-named.

“I don’t think religious liberty and gay rights have to be in tension with [each other],” Wilson tells Georgia Voice. “But it requires energy and effort and input from stakeholders from both sides and buy-ins, and that’s harder sometimes than just crushing the other guy.”

Georgia Prospers and the Mormon Church

Wilson says she see believes there are times when the government “crushes religious people for no good reason” and doesn’t think bills like state Sen. Josh McKoon’s (R-Columbus) so-called “religious freedom” bill will give religious people a vehicle to discriminate since the there are no statewide protections for LGBT people in place in Georgia anyway.

She hasn’t spoken to legislators in Georgia about the Utah Compromise, but she says the formation of coalitions like Georgia Prospers is a good start to the conversation. The coalition unites corporations like Delta, Coca-Cola and Google with small businesses, the Georgia Chamber of Commerce and hotel and tourism associations against laws that would discriminate against the LGBT community.

“When you get not just the big Fortune 500s but when you get the tourism bureau and mid-sized companies and small companies saying ‘this isn’t correct,’ I think you have the kind of counterweight that’s going to make things happen,” she says, adding, “Much in some ways as the Mormon Church serves in Utah itself, they’re a huge counterweight in that community. Well, so is business in Georgia.”

When told about the newly proposed and soon-to-be-proposed bills in Georgia, like the Pastor’s Protection Act, plus one that would allow businesses to refuse service to same-sex couples, and a state version of the First Amendment Defense Act, which would protect local and state employees with religious objections to same-sex marriage, Wilson says the decks are stacked too high on one side.

“My basic position is that both sides have to take something off the table here. Everything you’ve just described are one-sided deals. They’re deals that are talking only about the interests of religious people, and some of them are extremely broad,” she says.

Georgia Equality executive director Jeff Graham says that they “remain open to discussing appropriate religious exemptions” but that a big difference between Georgia and Utah is that due to the influence of the Mormon Church, Utah already had broader religious exemptions on the books than most states or federal law.

“The basic principle to ask ourselves is whether or not members of the LGBT community should be treated differently than other groups that are currently protected under federal civil rights laws,” Graham says. “I would contend that there is no legitimate reason to create separate religious exemptions for the LGBT community. That is one of the major reasons that the national strategy has shifted from the Employment Nondiscrimination Act to the more comprehensive Equality Act.”

Perhaps tellingly, we contacted four Republican lawmakers for comment on this story and none responded back. But, Wilson remains optimistic.

“If it can happen in Utah, the single most conservative state in America, it can happen in Georgia,” she says. “But it’s going to require a coalition of stakeholders who want to see a good outcome and don’t see gay rights as being in tension with religion. Somehow you’re going to have to take account of that and give those folks assurances that none of this is at their expense.”