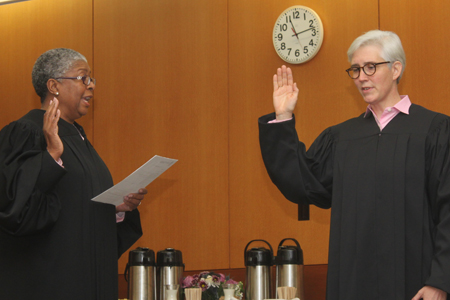 After being officially sworn in, Morrison received a standing ovation from the packed courtroom on the third floor of the Fulton County Courthouse and then a big hug and kiss from Garner.

Morrison served as the Sandy Springs Assistant Solicitor and was elected as Fulton County State Judge in July.

Morrison thanked her family for teaching her the values to allow her to live her live “honestly, openly and with an appreciation of others.”

“This is a day in my life I did not expect. A day I would not have predicted when I started my legal career,” she said.

“I went to law school and became a lawyer because i wanted to be more involved, to have something, and more importantly, some way to contribute and take part in our shared society,” she added.

Morrison also thanked her partner of more than 11 years. 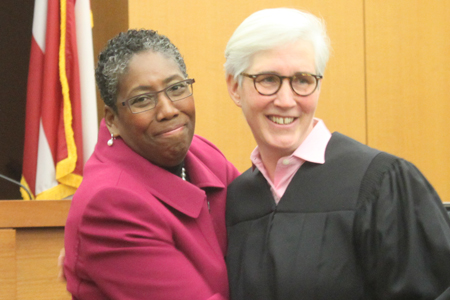 “I want to thank my partner, Commissioner Joan Garner … for all her support and for inspiring me through her own public service to step up and take public office as a way to give and support and share with our community,” she said.

“I’ve run a few marathons and know the prize is in the perseverance, the win is in the work. I’m honored to take this office to have, to have this opportunity at a unique moment in time when possibility and promise have come real in a new way,” Morrison added.

Check out more photos from the ceremony by clicking here.