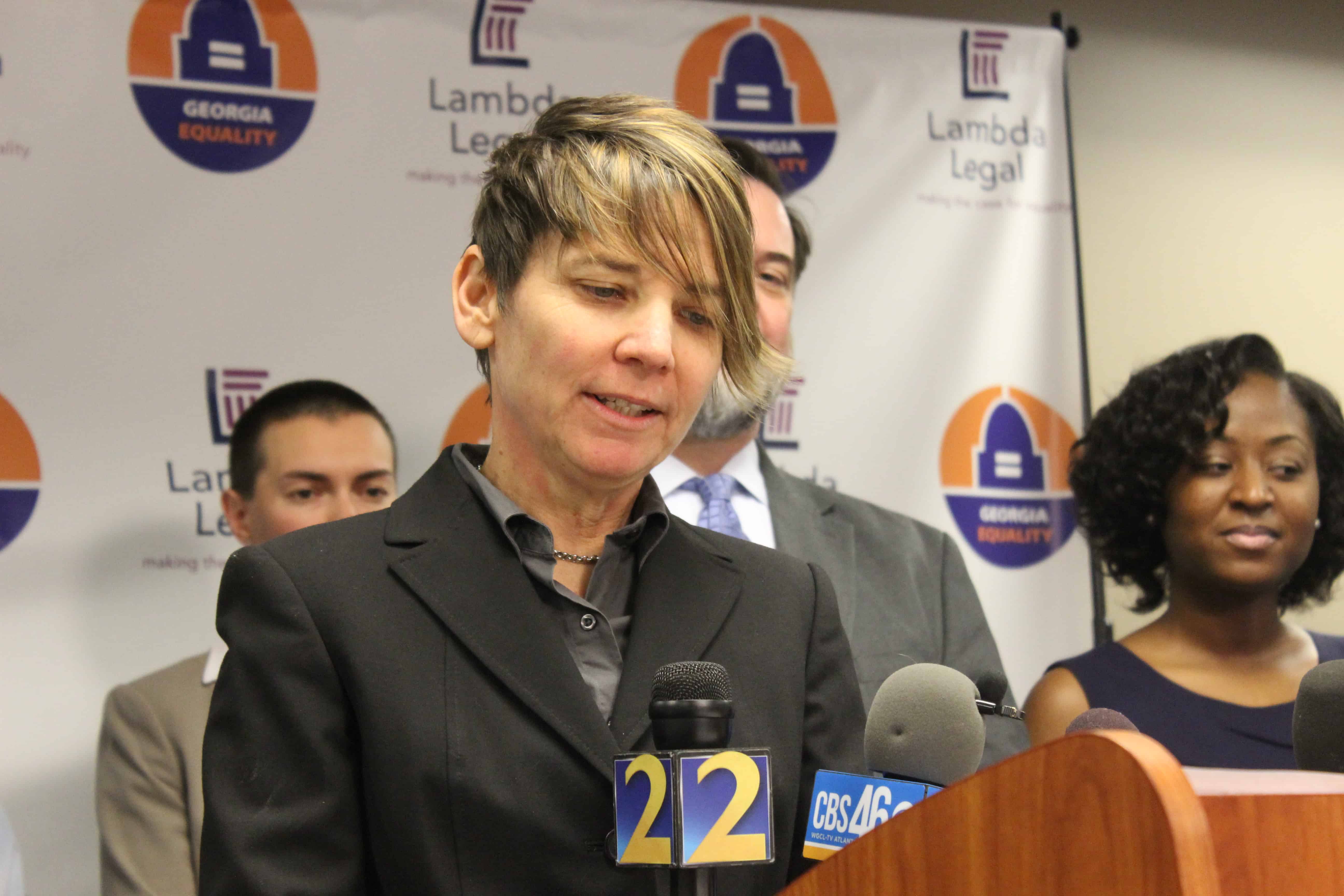 Lambda Legal late Tuesday filed a response saying it does not oppose the state’s motion to stay a ruling in Georgia’s same-sex marriage case until after the Supreme Court makes it ruling on marriage bans this summer. Georgia Attorney General Sam Olens on Jan. 20 filed a motion to stay the Georgia case until after the Supreme Court’s ruling on same-sex marriage to come likely in late June.

“Plaintiffs are keenly aware that every passing day without access to marriage inflicts profound harms on same-sex couples in Georgia,” the Lambda Legal filing states, adding, “As long as a stay is in place, same-sex couples and their families remain in a state of limbo with respect to adoption, child care and custody, medical decisions, employment and health benefits, future tax implications, inheritance and many other rights associated with marriage.”

Because the state will also mandate at least four months of discovery, and likely longer, Lambda Legal notes that the Georgia case would not be decided before the Supreme Court case rules.

“Based on all these circumstances, in our response we had to acknowledge the reality there is virtually no chance this court could rule on our case before the Supreme Court rules on the constitutionality of marriage bans,” Lambda Legal Senior Attorney Beth Littrell told the GA Voice.

“While we did not file the motion to stay and do not want the delay, we filed the response to give the court information to help it make its own decision,” she added.

The court may want to have a hearing on this motion, Littrell said, and Lambda Legal would of course be there to hopefully lead the court to make a decision that will allow the case to move forward expeditiously.

“But the reality under federal rule is that if a party feels it needs to conduct discovery it gets at least four months to do so,” she said.  “And it’s likely that any discovery conducted would be either pointless or completely useless because the Supreme Court ruling will reshape the issues.”

Waiting until after the Supreme Court rules will also give Lambda Legal a clearer path and allow for it to “hit the ground running” in the Georgia marriage case because, Littrell noted, the Supreme Court’s ruling may not erase all state marriage bans in one fell swoop and still leave legal battles to be fought in district courts.

Much frustration has been expressed by Georgia residents who are disturbed Georgia appears to be one of the last state’s to get a ruling on marriage equality. Littrell said she and her colleagues, as well as the Georgia plaintiffs, share the frustration.

“I share the frustration that Georgia will be amongst the last states and had hoped the case would move forward faster, and that the judge would have denied the motion to dismiss a long tome ago,” she said. “But the judge controls the litigation. We are as frustrated as anyone that same-sex couples cannot marry—it’s an outrage. That’s the reason why we brought this case.”

Georgia’s case is different than others in that U.S. District Judge William Duffey, in his Jan. 9 ruling to not dismiss the case, mandated evidence be given as to why same-sex couples should not be able to marry, Littrell explained. In most other cases where federal judges have struck down marriage bans, the judges did not rule that there be a discovery phase where evidence and experts are gathered by the plaintiffs and defendants, she said.

“In most of the other cases that have been ruled on there has been no need for discovery. In only a few of those cases have the courts or parties requested an opportunity to put evidence in the record,” she said.

“Here, because of Judge Duffey’s ruling on the motion to dismiss, he very clearly stated the state is required to put evidence into the record for the marriage ban. This opens the door to discovery,” she said.

While Duffey did not find much validity in many of the plaintiffs’ claims in his order denying the motion to dismiss, he did specifically note the plaintiffs’ argument that children are harmed when their same-sex parents are not allowed to marry.

The Amended Complaint [plaintiffs’ lawsuit] specifically alleges that prohibiting same-sex marriages harms the State’s interest in child welfare, and that the exclusion does not offer a conceivable benefit to children of opposite-sex couples. It contends that scientific consensus shows that children raised by same-sex couples are as well-adjusted as those raised by opposite-sex couples. It asserts further that excluding same-sex couples from marriage humiliates their children, and denies those children the ability to understand the integrity and closeness of their own families without offering any conceivable benefit to the children of opposite-sex couples. At this stage of the proceedings, the Court is required to accept these facts as true and consider the allegations in the Amended Complaint in the light most favorable to Plaintiffs.

Defendants’ Motion to Dismiss the Amended Complaint does not address how Georgia’s asserted interests in child welfare and procreation are advanced by the State’s prohibition on same-sex marriages, and the State’s refusal to recognize lawful marriages performed in other States.

AG Olens argued in his motion to dismiss the plaintiff’s case some of the tired arguments made by other conservative attorneys general—that same-sex marriage harms families and children cannot be raised by two parents of the same sex without being mistreated.

“The challenged laws define marriage as the union of man and woman,” Olens argued in the state’s July 21 motion to dismiss. “This definition furthers the State of Georgia’s legitimate interests in encouraging the raising of children in homes consisting of a married mother and father; ensuring legal frameworks for protection of children of relationships where unintentional reproduction is possible; ensuring adequate reproduction; fostering a child-centric marriage culture that encourages parents to subordinate their own interests to the needs of their children; and exercising prudence before departing from the heretofore universal definition of marriage.”

Duffey does make it clear, and agrees with Olens, that he does not believe the plaintiffs have the right to marry.

“The Court concludes that Georgia’s marriage laws do not implicate a fundamental right to marry a person of the same sex,” Duffey wrote in his denial to dismiss.

He adds, “Georgia’s marriage laws prevent a person from marrying someone of the same sex. They do not discriminate against men or women as a class.”

Lambda Legal filed the federal lawsuit in April on behalf of four same-sex couples and a woman whose legal wife died but she was denied to be names as such on her wife’s Georgia death certificate in Georgia.