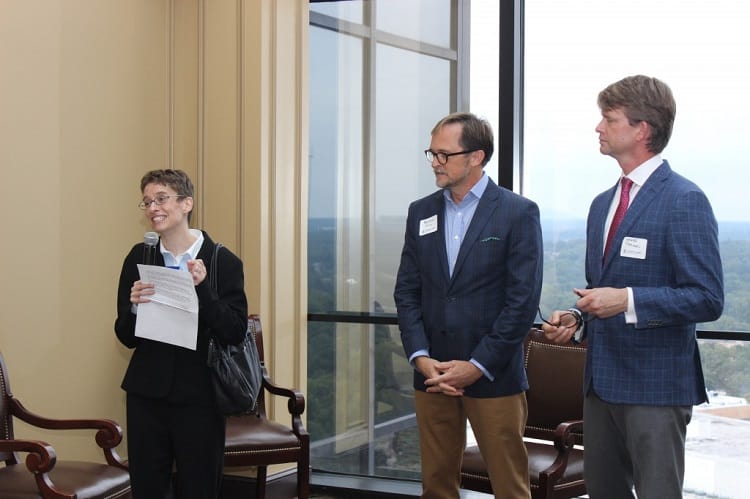 Today’s surprising news that the Supreme Court has decided against taking up a marriage equality case this term cleared the way for same-sex marriage to be legalized in 11 more states, which would bring the total up to 30—and the attorneys behind Georgia’s federal class action marriage equality lawsuit want to make sure their court knows about it.

Lambda Legal is filing a notice of supplemental authority with the U.S. District Court of Northern Georgia today, “to put the court on notice that the Supreme Court denied all these cases,” as senior attorney Beth Littrell tells the GA Voice.

Littrell points out that the Supreme Court didn’t make this decision based on the merits of the cases.

“At the same time, I think it does send a message to federal judges who are ruling in these cases that are still pending that they’re likely to be on the wrong side of history if they uphold marriage bans,” she says.

And while today’s decision put the nationwide legalization of marriage equality on the backburner, it bodes well for individual statewide cases like Inniss v. Aderhold, Littrell says.

“While it would have been wonderful if the court took one or all of these decisions and ruled in [the LGBT community’s] favor, what happened today is the second best outcome, which allowed these good decisions to stand,” she says. “That’s a very good sign. Thousands and thousands of couples will be able to marry across the country including the Deep South. I predict that this will be a very good outcome—a slower process but in the long run a very good outcome.”

Georgia attorney general Olens back in the spotlight

“It strongly strengthens my argument that the AG should not defend the case,” says Eric Segall, a law professor at Georgia State University and a constitutional law expert. “The Supreme Court, faced with lower court cases all of which overturned bans on same-sex marriage, didn’t see fit to weigh in.”

Constitutional scholar Anthony Kreis agreed, saying, “It is abundantly clear—now more than ever—that the Supreme Court will not uphold marriage bans barring a major change in the makeup of the Court. The probability of success for the State in either the District Court or the 11th Circuit Court of Appeals is virtually zero. As such, Attorney General Olens should immediately reverse course and decline to defend the constitutionality of Georgia’s marriage ban.”

Democratic attorney general candidate Greg Hecht has received widespread praise from the LGBT community for his vow to drop the state’s defense of the same-sex marriage ban should he be elected to office. Hecht faces off against Olens on election day Nov. 4.

The next date to keep an eye out for in the Inniss case is Oct. 22, the deadline for the state to file a reply to Lambda Legal’s response to the state’s July 21 motion to dismiss the suit. Then it’s in Judge William Duffey’s hands from there.

Littrell also says to keep an eye on Brenner v. Scott, the Florida marriage equality case pending before the Eleventh Circuit Court, which is the federal court of appeals that has jurisdiction over Georgia and Alabama as well. A U.S. District Court judge ruled in favor of marriage equality in Florida in August, which the defendants then appealed to the Eleventh Circuit the following month.

“If that decision comes out before ours is decided, it will have a big impact on what happens in our case,” Littrell says. “That would create precedent that Judge Duffey would be required to follow.”

Florida officials have until Oct. 15 to file the next brief in that case.

UPDATE 4:00 p.m.: Hillel Levin, associate law professor at the University of Georgia and an expert on same-sex marriage rulings, weighs in.

The Court’s decision not take up the issue of same-sex marriage for now has no direct legal implications on the Georgia case, but it does have some important indirect implications.

First, had the Supreme Court taken one or more of the cases–as many expected–the current case would likely have been stayed until the Court rendered its decision and possibly been rendered moot altogether, depending on what that decision said. By electing not take up any of the cases, the Court made it much more likely that the Georgia case will move forward. There’s now no reason that it shouldn’t.

Second, the immediate effect of the Court’s decision not to rule on the legal question, is that same-sex marriages will go forward in several more states. As more and more states recognize same-sex marriages, and as more and more same-sex couples tie the knot, it will become more and more likely that Georgia and other holdout states will come to recognize these unions. This could happen in various ways. The social pressure to accept and respect these unions in Georgia will grow; people will increasingly see these marriages as no big deal, thus reducing opposition; and, if and when the Supreme Court ever does decide to take up the issue, it will have a more difficult time undoing the facts on the ground.

In other words, the Court’s “decision not to decide” does not merely keep the status quo. Rather, as a practical matter, it makes it ever more likely that same-sex marriage will soon be a reality all over the country–albeit through a more gradual and organic process than if the Court had taken up the issue and rendered a clear decision mandating recognition countrywide.

Today’s ruling confirms what we already knew: that these bans are unconstitutional, and that the Attorney General should quit spending state resources defending an unconstitutional law and should focus on protecting children and elder Georgians from abuse.