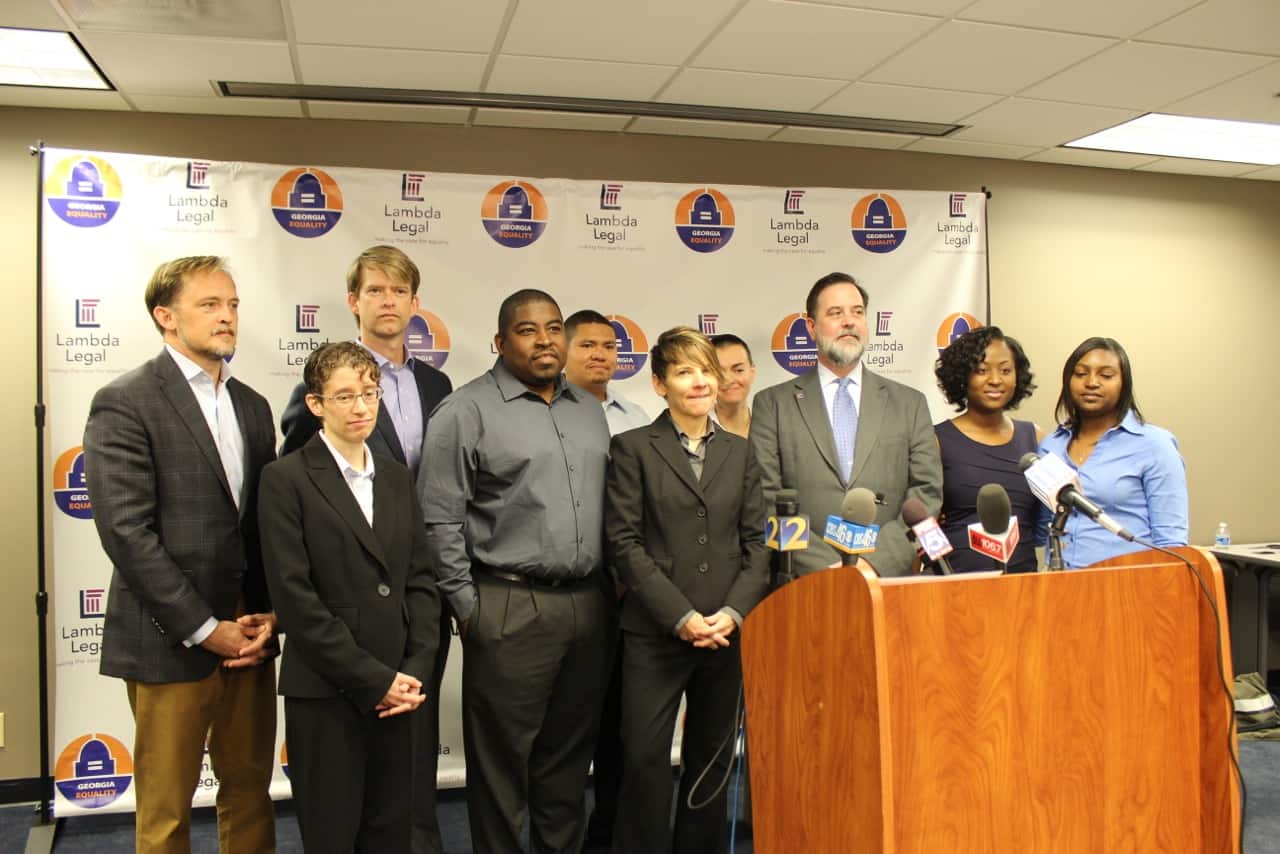 Earlier this morning, Lambda Legal introduced the plaintiffs and officially announced the filing of their class-action lawsuit which aims to bring marriage equality to the state of Georgia.

Many of the plaintiffs were clearly emotional throughout the press conference, with several tearing up.

‘THIS IS WAY BIGGER THAN US’

Plaintiff Shelton Stroman, who is joined in the suit by his partner Christopher Inniss, spoke about trying to explain to their nine-year-old son why his fathers cannot marry.

“When we ask him does he understands this, he says he does,” Stroman said. “But he replies with this famous quote from Dr. Seuss: ‘A person’s a person no matter how small.’”

Avery Chandler is a U.S. Army reservist who is filing with her partner Rayshawn Chandler, both of whom are Atlanta police officers.

When asked how hard of a decision it was to join the lawsuit, Avery said, “It was difficult at first, but this is way bigger than us and why not us? It was time to step forward.”

And as to the response from their fellow APD officers about the suit, Avery shrugged and drew laughter from the assembled press corps saying, “We’ll know in a little while.”

Plaintiff Jennifer Sisson was sadly not able to share the day with her partner Pamela Drenner, who passed away last month after a long battle with ovarian cancer. When Sisson and her son went to make funeral arrangements, they were told they could only choose the marital status of “never married,” “widowed” or “divorced” even though the two were legally married in New York the previous year. The death certificate eventually read “never married,” which caused tremendous pain to Sisson.

“It gives me a different ending to a very long struggle,” Sisson explained in response to why she joined the suit. “The best way I can honor her life and the love we had is to stand up. So that’s why I’m here.”

‘A MASTERFUL PIECE OF LEGAL STRATEGY’

As for what’s next, Lambda Legal’s Littrell said the courts are unpredictable. The suit will be presented to the defendants, and Littrell mentioned the possibility that they could decide not to defend it.

Constitutional scholar Anthony Kreis, who calls the case “a masterful piece of legal strategy,” reviewed the suit and says he suspects at least one of the defendants may elect not to defend the constitutionality of the marriage ban.

“Lambda picked an excellent cross-section of Plaintiffs who are sympathetic, but also illustrate the full array of daily struggles same-sex couples endure because they’re denied marriage rights,” Kreis tells GA Voice. “Ultimately, this is a strong first step toward securing the basic constitutional and human rights guarantees that are owed to every family in Georgia.”

“While there is no doubt that state and federal judges across ideological lines have struck down discriminatory marriage laws just like Georgia’s,” Kreis says, “the landscape in this court is favorable.”

For her part, Littrell is focused on the endgame.

“While our system of government hasn’t always gotten it right along the way, we get it right in the end,” Littrell said. “For same-sex couples in Georgia, the end is in sight.”

GA Voice has been reaching out to state elected officials, the defendants and political candidates running in this year’s elections to get their positions on the case.