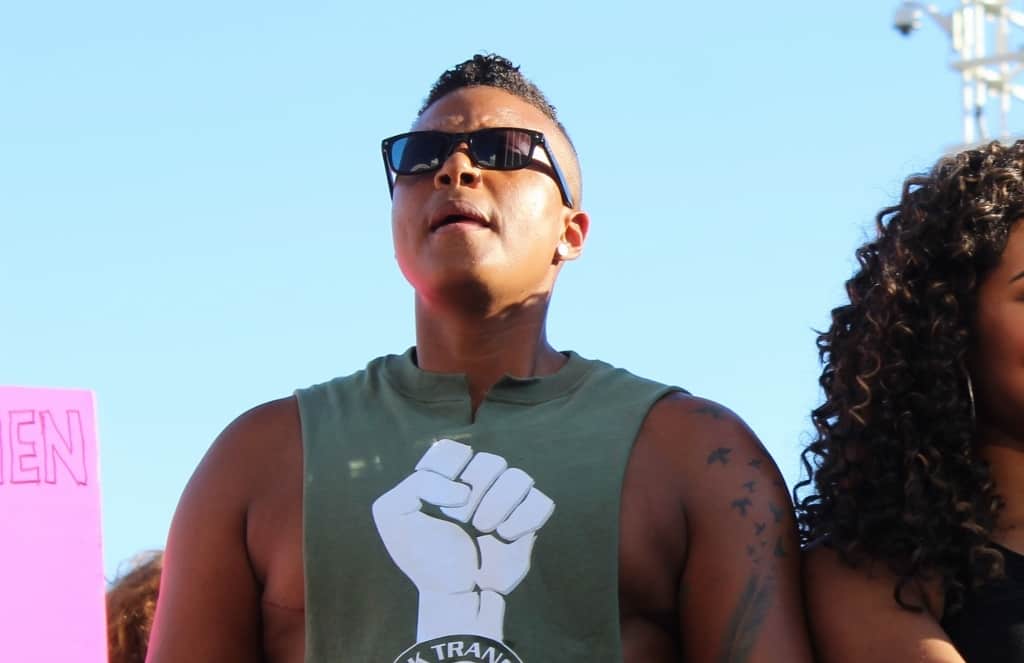 If you want to know how dedicated Holiday Simmons is to something he believes in, take this as an example—in 2004, several big-name actors swore they would move out of the country if President George W. Bush were reelected. They didn’t, of course. But Simmons did, moving to Toronto for a year because he “was just really upset with the U.S.” over the outcome.

It’s that kind of persistence that has fueled him in his over 20 years of activism, including his current role as Director of Community Education and Advocacy for the Southern Regional Office of Lambda Legal.

Simmons talked with Georgia Voice about what led him to become an activist, what state representative convinced him to apply for a job at Lambda Legal, his role in the Black Trans Lives Matter Movement and more.

Was there one event in particular that led you to become an activist?

I think I started becoming an activist in high school with students with disabilities and a little bit around race issues. But I didn’t start prioritizing that point of my life until I quit playing soccer in my junior year at the University of Virginia.

[The University of Virginia is] definitely sort of old money, old South, a type of South that I had not experienced yet. So there was always some racist frat party that was happening, like gangster-themed. There was always sexual assault that was happening on campus that I could organize around. The LGBT student group was pretty active. We actually started the Day of Silence that is now more of a high school-led event, but it started at UVA’s campus while I was there.

So then you get your master’s from Washington University, move to Toronto then New York. How did you get to Atlanta from there?

I was there for six years mostly working at GLSEN doing schools organizing. Part of that work is how I got to know the Atlanta LGBT community because I ran a weekend-long retreat for queer students of color that happened in Atlanta during Martin Luther King Weekend.

It was about the intersections of racial justice and LGBT justice and one of the events for that weekend was to have an inter-generational conversation with these young people coming from all over the country and local Atlanta organizers. So I organized that with [then Lambda Legal Community Educator] Simone Bell and that happened for about three years in a row.

And when I moved to Atlanta, because I wanted more space and warmer weather and just slightly nicer people, all the things that New York doesn’t have [laughs], I was looking for work. She was just starting her campaign to be, ultimately, a state representative and she was saying, ‘Hey, I’m leaving my job to go into politics so you should apply for it.’ So that’s what brought me to Lambda.

[Laughs] Fortunately I haven’t had to respond to that but if I had to, I would say that’s very true. All lives do matter, and there are particular lives that are disproportionately targeted and killed and not prosecuted fairly and actually don’t even have mass public sympathy and so that’s why we’re highlighting that those lives matter. Public appeal says they don’t, so through actions and hashtags and T-shirts we have to remind people that we actually do.

The meaning of the word “activist” has evolved over time. You used to think of an activist as someone who’s marching with a bullhorn or lying down in the street. Now there are digital activists, which some people would say is not activism. What is your definition of an activist?

I’m so glad you asked this question and it’s one that I’ve been speaking about since the Black Lives Matter movement started because there’s been such a heightened presence of a particular kind of activism which is the one you described about being in the streets with the bullhorn.

I’ve had a lot of folks come to me and say, ‘Hey, I got a newborn, I can’t be in the streets’ or ‘Hey, I have a disability, I can’t be in the streets’ or ‘I have a prior record so I can’t get arrested.’ All of the reasons why not everyone can do that type of activism I’ve been really sensitive to, and I’ve been really encouraging people to locate their skill set and assert themselves there and also their comfort level and also the amount of risk that they’re willing and able to take.

Even if, say, everyone could do that traditional in-the-streets-with-the-bullhorn, I don’t think that’s the only effective way, and it certainly can’t be the only way. There is the loud in-your-face, there is the quiet behind the scenes in meetings, there’s art—I really really want to uplift art as activism.

So for all of those reasons, in order to have a wider audience and a deeper message, I think that we need more tactics in order to incorporate more people and be inclusive of more people. I really want us to have a more diverse portfolio around change that we make in general and definitely in Atlanta, because we’re a city that was built on the civil rights movement. [U.S. Congressman] John Lewis is still here to tell those stories. We definitely need to be creative in our approach.

The last person to hold your job at Lambda Legal left to go into politics. Would you ever have an interest in that route?

I don’t know … I don’t think so. I’m leaning more towards doing direct service, like therapist-type work or some combination of advocacy with therapy, not just one-on-one but helping activists and helping organizations stay sustainable with their own mental and physical health while they’re helping other folks. That’s likely what my next steps are is just healing and sustainability.