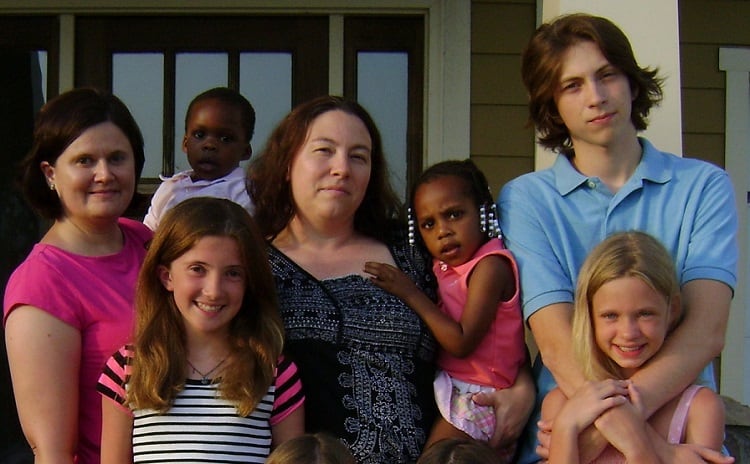 Beth and Krista Wurz’s paths took them all over the country before they found each other online in Georgia in 2005. They bonded over phone conversations for more than a month before agreeing to meet, and any fears or concerns were quickly allayed.

“By the time we laid eyes on each other, we were already in love from talking on the phone,” says Krista. “We just knew. I guess you get to a certain point and you meet that person and know that’s the one that’s yours forever.”

They made it (somewhat) official in 2010, marrying in a New Hampshire courthouse. But of course, once they crossed back over the Georgia state line, that marriage license meant little, especially for their seven children. Due to the constitutional ban same-sex marriages enacted here in 2004, Krista and Beth are denied the ability to jointly adopt their children, and Krista and some of the children can’t get health coverage through Beth’s job.

So they decided to do something about it. Last September, they joined three other couples and a widow in the fight to strike down Georgia’s same-sex marriage ban and help bring marriage equality to the state.

However, they will have to wait to hear the fate of their case until the U.S. Supreme Court rules on the issue, which will likely occur in late June.

Beth, 41, was born and raised in Little Rock, Arkansas, and came out when she was 18—a fact that didn’t exactly surprise some.

“I had friends from high school who were wondering when I was going to tell them,” she says.

Her friends supported her, but she had less luck with her family, who didn’t take the news well, with some telling her she was going to hell. She got through this period thanks not only to her friends, but also to the fact that there was a Unitarian Universalist church in town that had several LGBT-friendly events. Eventually, her family came around.

She didn’t stay in her home state much longer; she yearned for a more gay-friendly area to live. So she moved to New York City for graduate school, then back down south to Georgia for work.

Krista, 40, was born in New Jersey, but moved around often as a child due to her father’s work as an engineer, an existence she likens to being an Army brat. Every year or so there was another move, a new school, new friends.

“It was really hard to lose the people that you became very close to, but in the end for me I turned into a very extroverted people person and also someone who can engage people pretty well because you have to adapt to everything you walk into,” she says.

That ability to adapt came in handy when she enlisted in the U.S. Air Force, but by the tender age of 23 she found herself adapting to an entirely new situation—having a baby, getting divorced to a man she had married at a young age, and coming out. Her family was supportive, but there was the matter of “Don’t Ask, Don’t Tell” to deal with, barring service members from serving openly in the military. The law has since been struck down.

Krista was a Korean linguist who was about to start a job at the National Security Agency, but she heard horror stories of other gay and lesbian troops being found out and discharged.

“I just could not see that happening to me. I had a young son,” she says. “So I contacted the Service Members Legal Defense Network to see what I needed to do to protect myself.”

She drafted a letter to her commanders letting them know she was gay. They read her rights and conducted an investigation to determine, among other things, that she wasn’t simply lying to get out of the military. She lost her security clearance. Three months later, she was discharged from the Air Force.

Krista’s path eventually took her down to Georgia as well and, with a few clicks on a computer, a bunch of phone conversations and a fateful meeting, she and Beth began their lives together.

Both came to the equation with a child each, but their home beckoned for more children to come.

While living in Columbus, they decided to become foster parents. They had a couple of placements that didn’t lead to adoption. They later moved to Brunswick in 2010 so Beth could take a job as an English professor at the College of Coastal Georgia.

As they were walking out of that courthouse in New Hampshire with a marriage license in hand, their phone rang. It was DFCS in Columbus asking if they wanted to adopt three girls. When they got home, they picked the girls up. That adoption was finalized in 2011.

A few months later, they had a placement of four-month-old twins, and that adoption was finalized last July. That made seven, now ranging in age from three-and-a-half to 18 years old.

“It’s never a dull moment,” Krista says. “It’s always busy and always chaotic but you realize at a certain point, and I think it’s about four kids in, that it really can’t get that much louder or wilder. You just have to buy more food. It’s just fascinating to see each of their personalities, how they interact with each other and of course try to drive each other crazy. It’s very, very sweet.”

But due to the state’s same-sex marriage ban, only one of the two can be listed as the legal parent of any of their adopted children. Beth says second-parent adoption isn’t available in Brunswick.

“We feel very much split down the middle because we don’t all legally belong to each other as we would if we were a heterosexual married couple,” says Beth. “When you’ve been there for every milestone and runny nose, it’s very demeaning.”

The ban has also led to awkward conversations with the children, who ask when the couple’s wedding is going to be in Georgia.

“I have to tell them we’re not allowed to do that yet and the look on their faces…they’re shocked, and then they’re mad,” Krista says. “We’re just tired of it. We’re just kind of over seeing this happen. We’re like, what is happening here? Why is Georgia so far behind? We just felt like it was something we had to do.”

And if/when marriage equality comes to Georgia, they plan to make it up to the children, who were not able to attend the nuptials in New Hampshire.

“That’s always something that especially our girls are interested in,” Krista says. “When it’s finally legal, we can have a huge wedding because to them that’s really important.”